'Her work involves hiring people to serve in the hospitality industry, and she acknowledges that though remunerations are fixed, those with fairer skins are the first pick of companies, while those of a darker hue have a difficult time getting placements.'
Kishore Singh is startled by the intolerance all around us.
Illustration: Uttam Ghosh/Rediff.com 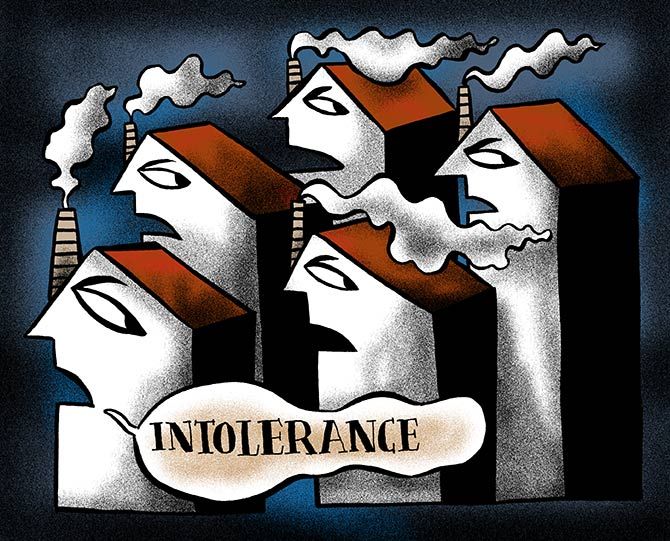 My wife's current bestie is hardly racist -- indeed, Sarla would be shocked at the suggestion that she discriminates on the basis of colour -- but the staff she employs all come from the hills.

"They look clean," she told my wife in a moment of candour, refusing, thereby, to be served by people of colour, or with racial distinctions such as those from the North-East.

Her work involves hiring people to serve in the hospitality industry, and she acknowledges that though remunerations are fixed, those with fairer skins are the first pick of companies, while those of a darker hue have a difficult time getting placements.

No wonder there's no one south of the Vindhyas in her service staff, though she doesn't mind hiring them out as accountants or office clerks.

Don't believe me? Just look at the cabin crew in our several domestic airlines and you'll be hard put to find anyone who’s even 'wheatish,' the acceptable colour that marks the cusp before things turn, well, dark.

Indian discrimination on the basis of colour is so complex, it calls to mind graded tones of fairness, or darkness, as a parameter of goodness and evil.

Any wonder we're unkind to our human brethren who must be habshis, cannibals, if they are dark-hued.

With generalisations such as these -- and I daresay they come from a fear of the other -- can we say that any Indian city is truly cosmopolitan?

That people of colour -- black, yellow or, even, white -- will not be stared at and scorned?

That white women with their blonde or russet hair will not be equally mocked in smaller towns?

Can we claim to be inclusive and rude at the same time?

We're equally disdainful of others' customs and food habits.

Sarla loves her tikkas; nothing can get her to try anything different. Which is why, when in Italy, she couldn't bear the pizzas and pastas "because they're not like back home" with chicken masala toppings and pungent keema gravy.

That's like Indians complaining that Chinese food in China is not Chinese enough.

To travel across the world, but expect dal-chawal and butter chicken shows a disengagement with local cultures, yet Indian travellers are some of the most demanding and least forgiving when it comes to eating out.

The Far and South-East Asians earn our derision for the eels and crawlies they consume at their banquets, forgetting that the vegetarian sitting next to us might react equally abhorrently to our choice of oysters or mussels, or, indeed, hare and venison.

That someone can eat dogs alarms us, but at farms, calves and lambs, chicks even, are given names by children and treated as pets till an adult sees fit to serve them at the table.

Why is one gross, the other acceptable, if not for our conditioning?

These days, with our friends' children all grown up, conversations between mums veer naturally towards nuptials and the kids' choice of partners.

Chasms of misunderstanding guide those choices: The north Indians can't fathom their children dating those from the south or east; the 'Madrasis' hiss about the 'Punjabis.'

As for those who pick a partner of the same sex, the shame is as impossible for their parents as a Hindu-Muslim 'love-jihad' is for majoritarians.

But the rift is more easily bridged should the partner be 'foreign,' preferably blue-eyed and blonde.

That can be a saving grace, but the acceptance of a son- or daughter-in-law of colour continues to remain beyond the pale.