... As the world swings from 'financialisation' to 'artificial intelligence', asks Ajit Balakrishnan. 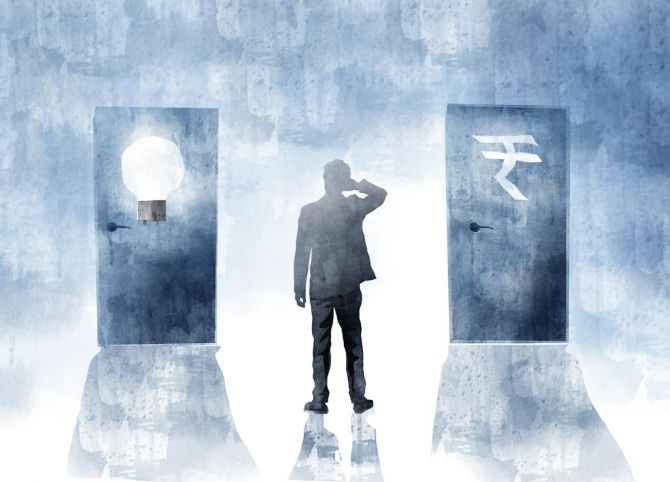 Millions of young Indians flock to get admission to one of India's 5,000 business schools. Not only is an MBA degree seen a path to a better pay but also an avenue for switching careers.

It's the same in Europe, in the United States, of course, and even in Communist China.

And for the past decade or so business schools in every country in the world have also been making headlines every year with the astonishingly high starting salaries for their graduates.

How does one then make sense of a recent statement by Elon Musk, the celebrated American entrepreneur, in an interview with The Wall Street Journal, that 'The MBA-isation of American business' is doing harm to it and that American executives '... should focus ... on the product or service itself and less time on board mtgs (meetings>/em>) and financials'?

To be fair to business schools, their finance-orientation throughout the world is a relatively recent phenomenon, dating to perhaps the post-2000 period. Since then, business school grads have been sought out to such an extent by the finance and management sector (Goldman Sachs, Morgan Stanley, McKinsey, Bain and Company ...) that these two sectors in most years accounted for 40 per cent or more of job offers and certainly 80 per cent or more of the top-value starting salaries.

It is but natural that business schools, in turn, oriented their curricula to serve the needs of these two sectors.

If we look a little deeper, underlying this shift of business schools was the fact that a phenomenon called 'financialisation' was taking place in most economies.

During the period from 1980 to the present day, financial services have started accounting for an increasing share of national income in most countries relative to other sectors.

This was accompanied by a massive increase in the number and types of financial instruments, going far beyond the classical stocks, bonds, and currencies to things like equity futures, currency futures, interest rate swaps, derivatives, and so on.

In the United States, which led this movement, the size of the financial sector as a percentage of gross domestic product grew from 2.8 per cent in 1950 to 21 per cent in 2019.

It was but natural that to staff up for this gigantic wave of growth, the financial services giants and their companions, the consulting companies, flocked to business schools offering unheard-of starting compensation.

And students in business schools, in their fight to get recruited at these mind-blowingly high starting salaries, in turn flocked to finance courses in these business schools.

This, of course, is not the first time business schools have responded to structural changes in the economy. In the late 1960s/early 1970s the hot topic in business schools was 'marketing'.

While it was unclear at that time (I was at IIM Calcutta 1969-1971) why this was so, but with the passage of time it's clear now: The world was in the middle of the chemical revolution in which chemistry breakthroughs were creating products like synthetic detergents, paints, and polyester cloth.

Since these products were easy to manufacture and thus available from dozens of manufacturers, a way had to be found to differentiate them in the consumers' minds -- the concept of 'brand' was born, a way of creating 'intangible' images for each label/brand.

Advertising agencies sprang up as the experts in this (that explains, dear reader, why I, after graduation from IIM Calcutta, joined two others and founded Rediffusion, an ad agency).

Business schools at that time competed with each other to impart the various skills needed for this: Market research, brand strategy creation, and managing large salesforces to distribute these products across innumerable channels.

We are now clearly entering an era where success for a business is going to depend on the range of product innovation skills contained within the broad term 'artificial intelligence' (AI).

AI brings new approaches to age-old business challenges like classifying customers ('market segmentation') and predicting customer responses ('sales forecasting'), it may also bring a completely new way of looking at the business world: Viewing your business as part of a network of entities; mapping the network which your business is part of; figuring out the 'bridging opportunities', the 'geographic clusters', and the 'hubs' learning to avoid an 'algorithmic bias' and so on.

Competing in the Age of AI, a new book by Harvard Business School professors Marco Iansiti and Karim Lakhani is an example of how these topics in product innovation, till now seen to be a passion only among geeks, are now being embraced by business schools.

Like with every change in an era, the challenge for business schools (as for all educational institutions) as this new era dawns is not merely finding new teachers to teach these new skills but what is often a much bigger challenge: To get current teachers/faculty to agree that such a change is indeed under way, get their co-operation to drop some courses, and add new ones.

Anyone who has been involved in education will tell you that this is one of the toughest tasks to accomplish within an educational setting.

Suddenly, the deeper meaning of Elon Musk's comments start to make sense: MBAs have to become product- and business-model innovators and not mere chasers of financial goals.