News
Business
Movies
Sports
Cricket
Get Ahead
Money Tips
Shopping
Sign in  |  Create a Rediffmail account
Rediff.com  » Getahead » Worried about the air you are breathing? Read this

Hazardous pollution has made anti-pollution gear and gadgets a near-necessity, says Khalid Anzar. 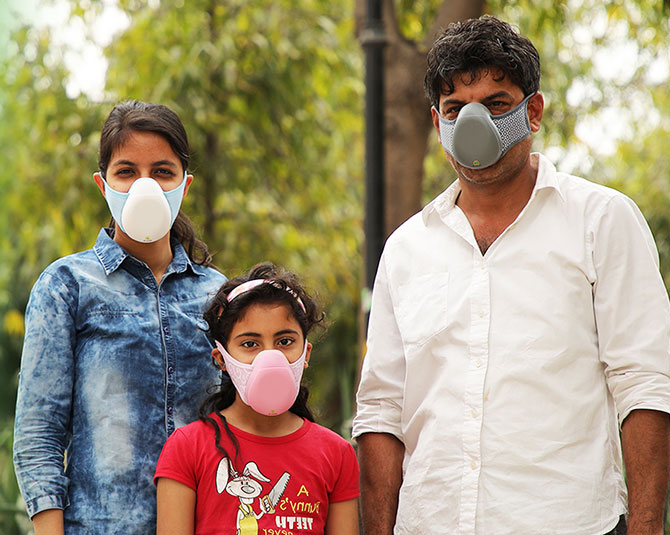 Come November and all that Delhi residents seem to be able to talk about is air pollution.

Delhi's air quality is legendary for all the wrong reasons, but other cities in India are not vastly better.

Particulate matter -- PM 2.5 and PM 10 -- is a silent killer, a form of pollution that is deadlier because it is 'invisible' and thus easily ignored.

The government is yet to wake up to a real and effective policy change to tackle this menace.

Till then, one's health is in one's own hands, especially for the privileged few who can afford to alter their environment for the better.

And there's help at hand.

Gather up your forces and get battle-ready with these anti-pollution gadgets. 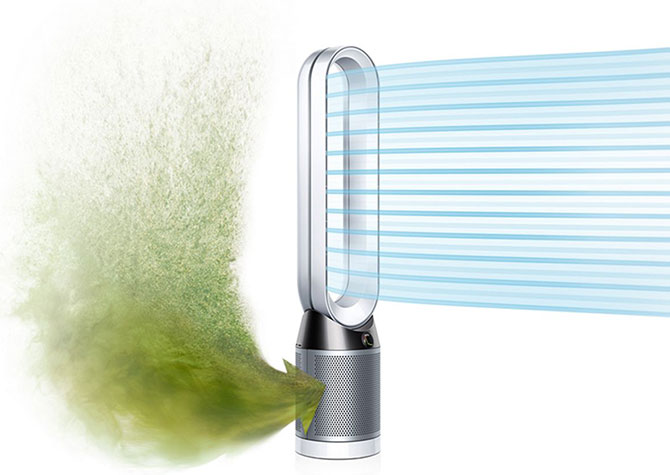 This tower-shaped air purifier looks, works and performs differently from any other air purifier in the market.

Designed for indoors -- the living room, bedroom or large lobby areas -- this air purifier is one of the most technologically advanced machines.

Its inbuilt sensors intelligently detect pollutants such as PM 2.5 and PM 10, and volatile organic compounds such as benzene and formaldehyde, that are emitted from paints, burning candles and materials in furniture and nitrogen.

It then cleans the air based on the readings from the sensors. 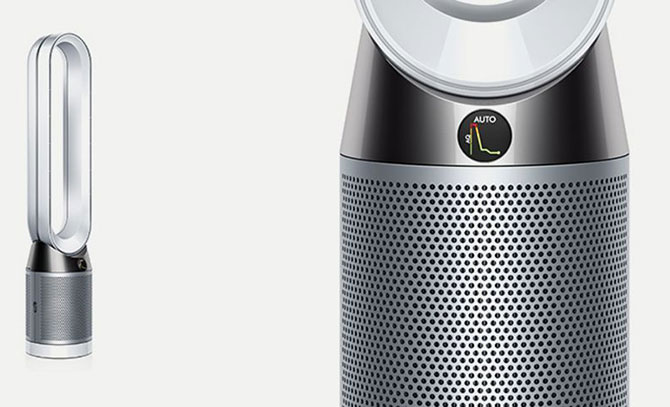 The Dyson Pure Cool has a tower stance with a circular base that makes it easy to place in even the most cramped rooms.

However, it works best if there are no obstructions near its base because this is where the HEPA (High-Efficiency Particulate Air), Active Carbon filters and suction fans are located.

The suction fan pulls the polluted air that passes through sealed filters, ridding it of pollutants and odours.

The clean air is then pushed back in the room through the oval, elongated tower.

The base has a rotating mechanism that allows the air purifier to efficiently clean air from all corners of the room. 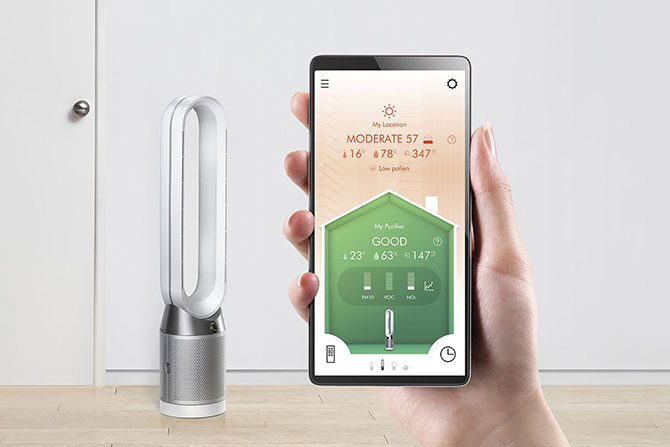 Though the air purification process is invisible to the naked eye, the display on the top-front side of the circular base shows the air quality reading, making it easy to comprehend details such as air quality index, PM 2.5 and PM 10 levels and odour conditions.

The air purifier also has inbuilt Wi-Fi that makes it easy to connect with Android and iOS devices.

With the help of the Dyson link app, users can fetch the air quality reading from the air purifier in real time.

The app also shows the filters's health and notifies when they need to be cleaned or replaced. 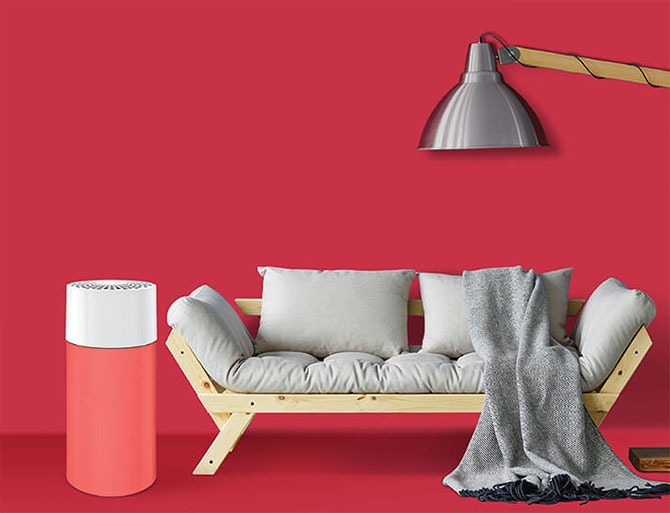 This tubular air purifier is portable and is a good fit for small rooms.

It does not have too many features and the design is minimal as well. 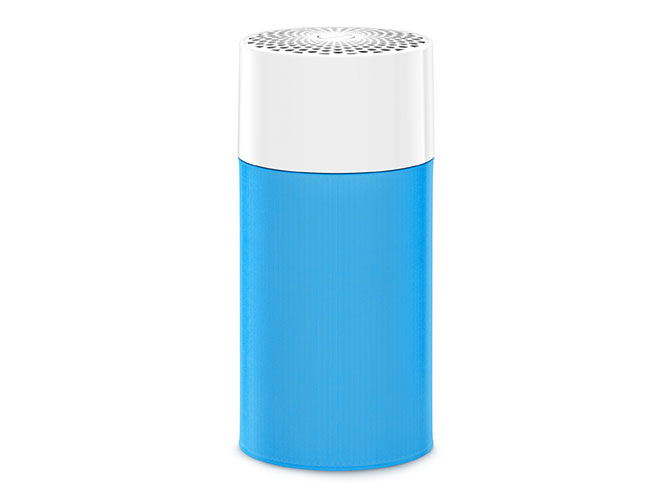 The Blueair Joy S has a small and lightweight build, which makes it easy to move from one room to another.

The air purifier has three functional areas -- the top has a touch-sensitive power key that also doubles up as fan speed controller, the upper side has the fan that sucks in polluted air and pumps the clean air out from the top and the lower side has a huge tubular shaped HEPA filter that cleans pollutants and odour from the air.

The bottom has a turn-to-open cap that is easy to operate while cleaning the filters or replacing them.

However, there is no indicator for air quality readings, which dents the purifier's overall utility.

The company claims that the air purifier is capable of filtering 99.97 per cent of pollutants, bacteria, virus, allergens, microplastics, smoke, dust, pet dander and pollen as tiny as 0.1 micron in size.

This seems rather exaggerated. 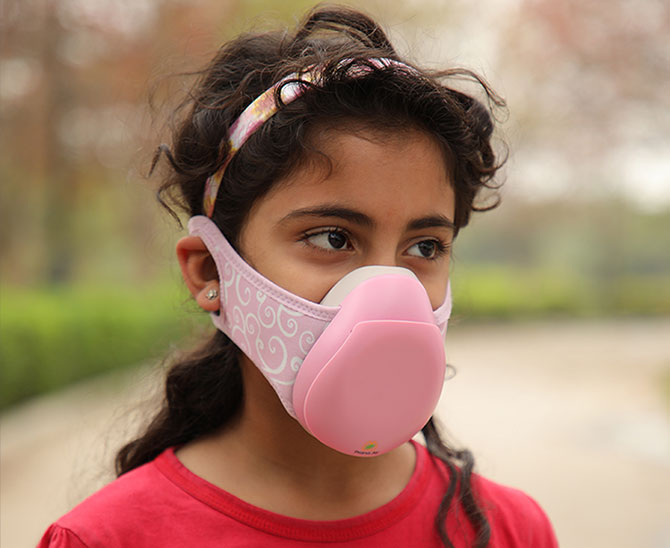 The market is inundated with anti-pollution masks but the Prana Air Motion belongs to a different breed altogether.

This mask has a fan that works with the help of an inbuilt, rechargeable battery.

The fan is covered with a filter which the company claims can remove nearly 95 per cent particulate matter of 0.3 micron size.

Once powered on, the fan pulls the polluted air from outside, pushes it through the filter that removes pollutants and then disperses it inside the mask.

This makes it easy for a person to breathe normally without needing to breathe harder.

As a mask, the Prana Air Motion has a bulky design that looks odd on the face.

Its silicon edges make it easy for the mask to be worn for long without much discomfort.

The adjustable straps are wide and keep the mask intact on one's face.

Overall, the Prana Air Motion mask seems to be a niche product in the anti-pollution masks segment. This mask is quite similar to the Prana Air Motion mask in terms of the way it looks, but it does not have a motorised fan to pull in air through the filter.

Instead, it has a bigger filter that is protected by a shatter-proof shield.

This shield comes in various colours and covers almost all of the mask from the front. 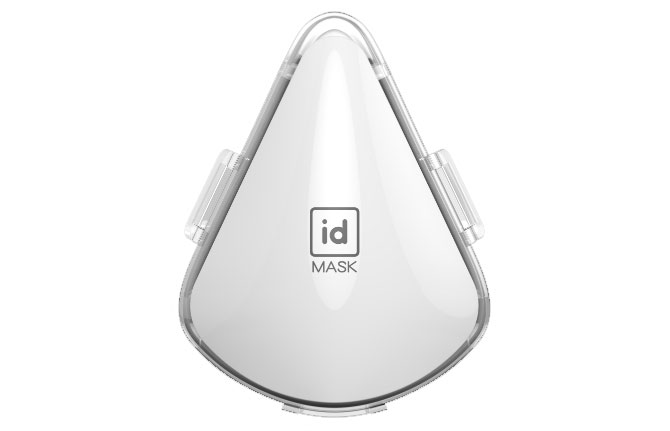 The ID Mask has four separate layers -- the base with a silicon seal, filter holder, filter and filter cover.

The silicon seal on the base helps the mask stay stable on the face, reducing the risk of accidental drops.

The filter holder keeps the filter properly stretched across the frame and the filter cover offers added protection.

According to the company, the mask is capable of filtering particles from PM 2.5 to PM 0.3.