Get latest news on your desktop
'The depth of our research helped us win'
Shalini Gupta January 12, 2010 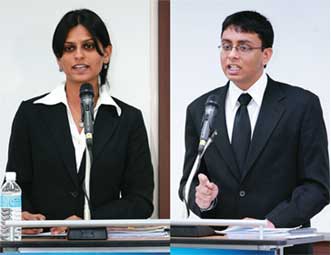 Abhimanyu and Raeesa are both speakers par excellence, albeit with a difference. They are the first-ever Indian team to have won the Manfred Lachs International Space Law Moot Court Competition held in Daejeon, Republic of Korea in October 2009. The final was judged by three sitting judges of the International Court of Justice (ICJ), The Hague, who praised the duo for their extensive research and "encyclopedic knowledge of international law".

These fourth-year students at the National Law School of India [Images] University (NLSIU), Bangalore (along with Shwetank Ginodia, a first-year student who participated as a researcher) defeated 16 other Indian teams to win the India round organised by the Indian Space Research Organization (ISRO). Next, they won the Asia-Pacific Regional Round (attended by nine other teams) in Sydney [Images], in April 2009, to then secure a win at the finals in Daejeon.

The team won the Lee Love Award for Best Team and the Manfred Lachs trophy. Raeesa, adjudged the Best Speaker, won the Sterns and Tennen Award for Best Oralist in the final. Abhimanyu received the highest speaker score (99) in the Asia Pacific Regional Round. Shalini Gupta in conversation with the young go-getters.

Abhimanyu, what do you think made your team stand apart from the rest?
It was the depth of our research that made our team stand out. No other team had gone as deep into the arguments as we did, so much so that we even remembered citations by heart. At one point in the competition, a judge misunderstood me, and it was after I cited not only the author, but the page number to support my argument, that he agreed.

Your most memorable moment?
Abhimanyu: When our speaking scores for the Asia-Pacific Regional Round were announced and both me and Raeesa got the highest scores ever in the history of the moot (99 and 95 respectively). The previous high score awarded to any speaker at the Asia Pacific Regional Round was 86. Even the World Finals were very memorable, chiefly because of the experience of arguing before sitting judges of the ICJ and the world's most eminent space lawyers.

At every stage, we were complimented extensively for the depth of our research and our knowledge of public international law.

Raeesa: We met a number of noted academics as well as the judges of the world finals (who are sitting judges at the International Court of Justice in The Hague) after the final rounds, for dinner. It was exhilarating!

Did your Alma Mater help you?
Abhimanyu: Our vice chancellor was extremely helpful with the funding. Professor Hegde gave us access to a lot of books. Dr Bhatt coached us for the competition and Professor Satish helped us with our oral arguments. Our seniors also advised and helped us.

What are the attributes of a good communicator?
Raeesa: You need to relate to your audience. For instance, the same legal concept will have to be communicated differently to a lawyer, or to a lay audience so as to make them understand it better. You need to gauge when you've caught their interest or when you are boring them. Speak slowly and clearly. It's a good idea to keep your sentences short and uncomplicated since most people have a limited attention span. Another very important skill is the ability to break down complex ideas and arguments into simple structures.

Abhimanyu, what are your future plans?
I'm very interested in international law and international relations and would like to study and even teach it after I pass out of NLSIU.