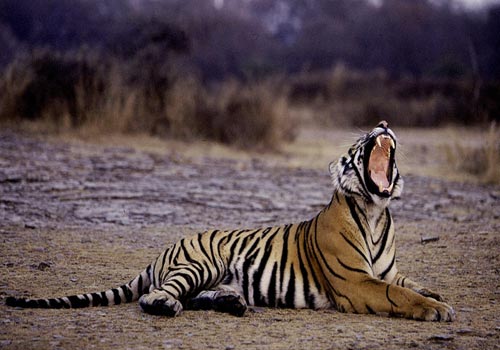 Indian safaris are anything but tame. Elephants, rhinos, reptiles, bears, and wild dogs roam the lush rainforests, while snow leopards make lonely footprints in the Himalayan snow. Of course, the holy grail of any safari is seeing the big cats, and in India that means the elusive wild tiger.

But the highlights don't stop there. Incredibly, the subcontinent boasts almost 90,000 living species, including 1,250 kinds of birds. Not all of them are thriving: The Asian rhino is India's most endangered large mammal, but the greatest fear is over the disappearing tiger -- a national symbol and major sightseeing draw. (Others facing extinction include snow leopards and freshwater river dolphins.)

Fortunately, though, most species aren't threatened, thanks to India's national park system, which has its roots in royal Indian hunting grounds that became public land after the British Crown departed in 1947. Today, parkland comprises tens of thousands of acres of animal terrain; the government designates over 30 parks as official tiger sanctuaries.

Your toughest decision will be deciding where to go, given the vastness of the country and contrasting landscapes of the national parks: western India's deserts in Gujarat, the jungles on Kerala's [Images] southwest coast, and savannah-like scrub in north-central India's Madhya Pradesh [Images]. But improved air travel across the subcontinent makes itinerary planning easier.

You may want to base your itinerary around what you want to see. For tigers, head to Madhya Pradesh. The Southern region conducts top elephant safaris. The Agra-Delhi-Jaipur triangle is within a day's drive of excellent tiger and birding environs. Assam and other northeastern states offer a more off-the-beaten-path experience, though fewer visitors travel this far.

Not all parks are uniformly run, so your best bet is to choose a reputable safari operator. CC Africa (a first-rate, Africa-based outfitter committed to defending India's tigers) has teamed up with the Taj Hotel Group to raise the standard of luxury at several facilities and add expert nature guides. Or try Texas-based Victor Emmanuel Nature Tours, which offers a multi-park package. Also, most hotels (if they don't employ their own naturalists) will arrange expeditions with veteran tour operators. Lodging options range from comfortable, air-conditioned suites to rustic, jungle tent camps within a few miles of each park.

When to go? Most parks close during monsoon season (June-October). Late spring, which extends from the end of February to mid-May, is best for glimpsing creatures thanks to spare foliage and crowded water holes.

Just don't forget your binoculars. And if it's a tiger you're after, keep your fingers crossed (and your eyes peeled): They're hard to find, but the experience is unforgettable.