What you can learn from a dabbawalla

A Six Sigma Quality Certification endorsed by Forbes magazine, a fan club that includes Prince Charles and Richard Branson (owner of the Virgin empire) -- this guest lecture was definitely going to be unlike any other we have had on campus at NITIE, Mumbai. 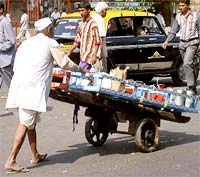 The speakers were not your regular pinstripe, suit-clad, swanky corporate types who are often spotted in B-school auditoriums, spewing management jargon.

Raghunath Megde and Gangaram Talekar, president and secretary respectively of the Nutan Mumbai Tiffin Box Suppliers Charity Trust of Mumbai, were here to share their mantras on 'Time Management' and 'Supply Chain Management'.

Popularly known as Mumbai's dabbawallas, they were here to explain how their establishment managed to supply, without any hitches, 2,00,000 lunch boxes everyday in the busy metropolis of Mumbai.

Before cutting to the management mantras, let's understand a few facts about our dabbawallas. Their mission is to serve their customers -- who are mainly office goers -- by delivering their lunch boxes at their doorstep on time.

They have 5,000 people on their payroll to ensure the prompt delivery of lunchboxes within Mumbai; these 'delivery boys' travel by local trains and use bicycles or walk to reach every nook and corner of Mumbai.

The lunch boxes are delivered exactly at 12.30 pm. Later, the empty boxes are collected and taken back to the homes, catering services or hotels before 5 pm. In fact, the next time you forget to strap on your watch before leaving for office, don't be surprised to find it in the lunchbox container brought by the dabbawalla from your home!

On an average, every tiffin box changes hands four times and travels 60-70 kilometres in its journey to reach its eventual destination.

Each box is differentiated and sorted along the route on the basis of markings on the lid, which give an indication of the source as well as the destination address.

Megde's presentation was in chaste Hindi. We got to know much about the operational aspects of the process.

From this, I deduced that dabbawallas are a prime example of management guru Michael Porter's Five Forces Theory at work.

According to Manav Malik, a first year student of NITIE, "Porter's theories, which are the basis for classical management principles, define the scope and nature of competition a company faces to attain leadership. Surprisingly, the dabbawalas are following these very principles in spite of their ignorance of the same."

These are as follows:

Started in 1880, the experience curve of the 125-year-old dabbawalla service serves as a huge entry barrier for potential competitors.

Besides, it would be difficult to replicate this supply chain network that uses Mumbai's jam-packed local trains as its backbone.

ii. Current competition: Porter's five forces theory states that strategy is determined by a unique combination of activities that deliver a different value proposition than competitors or the same value proposition in a better way.

The dabbawallas do face competition from fast food joints as well as office canteens. However, since neither of these serve home food, the dabbawallas' core offering remains unchallenged.

They have also tied up with many catering services and hotels to cater to the vast number of office goers.

iii. Bargaining power of buyers: The delivery rates of the dabbawallas are so nominal (about Rs 300 per month) that one simply wouldn't bargain any further.

Also, their current monopoly negates any scope of bargaining on the part of their customers.

Thus, we encounter a perfect win-win combination for the customers as well as the dabbawallas.

The strategy map framework in Porter's theory allows companies to identify and link together the critical internal processes and human, information and organisation capital that deliver the value proposition differently or better.

Human capital is the greatest driving force in the dabbawalla community; as a result, they are not dependent on suppliers or technology, thus negating the seller's power in the equation.

v. Threat of a new substitute product or service: As substitutes to home cooked food are not seen as a viable alternative in the Indian scenario, the threat to the dabbawalla service is not an issue at least in the foreseeable future.

This gives them a leeway to probably expand their already existing network into newer cities as demand increases in these places as well.

So, will these people next target the other metros in India? Only time will tell.

~ "Error is horror," said Talekar while explaining the operational motto. In the event of a dabbawalla meeting with an accident en route, alternative arrangements are made to deliver the lunch boxes.

For example, in a group of 30 dabbawallas catering to an area, five people act as redundant members; it is these members who take on the responsibility of delivering the dabbas in case of any untoward happenings.

~ The dabbawallas must be extremely disciplined. Consuming alcohol while on duty attracts a fine of Rs 1,000. Unwarranted absenteeism is not tolerated and is treated with a similar fine.

~ Every dabbawalla gets a weekly off, usually on Sunday.

~ The Gandhi cap serves as a potent symbol of identification in the crowded railway stations. Not wearing the cap attracts a fine of Rs 25.

In fact, Richard Branson, the maverick businessman who is never shy to promote himself and the Virgin brand, donned a Gandhi topi and dhoti (the dabbawallas' signature dress code), during the launch of Virgin's inaugural flights to Mumbai.

~ There are no specific selection criteria like age, sex or religion; however, I have never seen a female dabbawalla. The antecedents of the candidates are thoroughly verified and a new employee is taken into the fold for a six-month probation.

After that period, the employment is regularised with a salary of Rs 5,000 a month.

~ It is interesting to note there is no retirement age, and any person can work till he is fit enough to carry on the tasks required of him.

~ "As management students, there was a lot that we learnt from this lecture," says Karthik A J, a first year management student at NITIE. " The belief that technology is indispensable to solve complex problems was shattered. FMCGs and other industries can learn a lot from the simple supply chain logistics and efficient reverse logistics (transfer of empty lunch boxes to the source location)," he adds.

~ The concept of multi-level coding (colour coding on the lunch boxes for identification) and reverse logistics can be implemented in industries as diverse as soft drinks (where logistics becomes an important aspect, transporting the filled bottles to retailers and collecting empty bottles back to the plants), pharmaceuticals and other FMCG areas.

For example, can the bar coding mechanism (a computerised format) which is prevalent and expensive, be simplified with just colour/ number coding?

In small and medium scale organisations where bar coding systems would require a lot of resources, these systems can prove to be very efficient and cost effective.

Moreover, the dependence on technology could be drastically reduced.

~ The learnings for a working executive are enormous too. Managers and executives alike spend a lot of their valuable time learning various concepts in people and time management. Newer mechanisms like Customer Relationship Management, etc, have been developed to assist executives in the same.

But, in the midst of implementing technology and IT, basic principles in people management, sustainable relationship development and customer satisfaction have lost their meaning.

Our friendly dabbawallas are a perfect example of an important principle of both business and management -- the thirst to serve customers in a simple yet effective fashion without falling into the technology trap. I think this is an aspect which needs to be re-learnt and implemented in any organisation today.

~ The most enduring lesson that we learnt was to put the customer ahead of everything else. It is said that when Prince Charles expressed a desire to meet them during his visit in 2003, the dabbawallas requested him to schedule the meeting such that it did not interfere with their mid-day delivery timings.

Harsha Venkatesh is a first-year management student at NITIE, Mumbai.

Did you benefit greatly from a college activity or guest lecture? Have you travelled abroad for a student exchange/ fellowship/training programme? Are you involved in an exciting student activity?

Share your learnings with us. Mention your name, age, college, what course you are studying and location.