Some of the most interesting questions in business management centre around issues of strategy. Should a company diversify or stick to its knitting? Should it try to gain market share, or focus on return on capital? Is there a right time to adopt a specific strategy? Why do some strategies succeed while others fail? 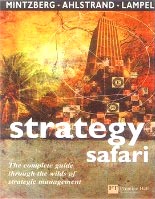 Considering the scope of the subject, it's no wonder that strategic management has spawned a vast literature. The problem, however, is that management strategists tend to see strategy in the same way the six blind men saw the elephant -- one looked at the tusk and believed the elephant was like a spear, another grabbed the trunk and thought it was like a snake, another touched the ear and thought the animal was like a fan, and so on.

Henry Mintzberg, Bruce Ahlstrand, and Joseph Lampel, the authors of Strategy Safari: The Complete Guide Through The Wilds Of Strategic Management, point out that, similarly, experts on strategy saw the subject through their own limited experience, and there is a need to draw these diverse experiences together in order to grasp the subject in its entirety.

The authors identify 10 approaches to the subject. These include:

The authors deal with each one of these approaches, placing them in the context of their background, mentioning the seminal papers that inspired each genre, and carrying out a thorough critique of each school of thought.

In the final chapter, they attempt to draw all the various threads together, pointing out that 'Every strategy process has to combine various aspects of the different schools. Can anyone possibly imagine strategy making in any serious organisation without mental and social aspects, without the demands of the environment, the energy of leadership, and the forces of organisation, without tradeoffs between the incrementals and the revolutionary? And can any strategy process be realistically pursued as purely deliberate or purely emergent? To deny learning is as silly as to deny control.'

'There are categories out there,' the authors conclude, 'but they should be used as building blocks, or, better still, as ingredients of a stew.'

Strategy Safari is a very good introduction to the entire field of strategic management. The authors are experts in the field, and have made outstanding contributions to it. Best of all, unlike a lot of management tomes, this book is refreshingly free from jargon, and can be easily understood by a lay person.

At the same time, the wealth of examples -- ranging from the introduction of Honda motorcycles into the US to American strategy in Vietnam -- not only breathe life into the subject, but are also helpful to the practising manager.

Perhaps the overall approach should be similar to the Chinese one of 'crossing the river by feeling for the stones,' the stones being the tools of strategic management.

The biggest lesson this book teaches is that, in management 'as in love, a concentration on technique is likely to lead to impotence.'