November 30, 2005
Lakshmi Krishnan, a Wake Forest University senior who explores the connections between literature, medicine and human rights, is one of the 32 Rhodes Scholars in America who will study at Oxford next year. Perhaps the most fiercely contested of the scholarships to study abroad, the Rhodes Scholarship had over 900 contestants. 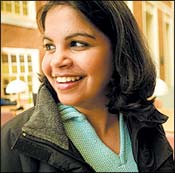 Mumbai-born Krishnan, 20, has lived most of her life in America and the United Kingdom and plans to be a doctor. "I want to work as a physician studying medical issues in the developing world," she says.

Krishnan, as president of Wake Forest's chapter of Amnesty International, studies AIDS and the human rights questions pertaining to it. She has also organised campus events addressing AIDS issues, the death penalty and domestic violence.

As an intern with the non-profit organisation Physicians for Human Rights, she has researched the conflict in one region of Uganda and its effects on HIV/ AIDS transmission. One of the papers she wrote to support the organisation's Health Action AIDS Campaign was used to educate health professionals in Kampala, Uganda.

What advice would you give to those who want to be Rhodes Scholars?

I think the most important thing is not to plan too much for it; it should be something that flows naturally from your own passions and interests.

The Rhodes is not something that you can study for. It's not just for high scholastic achievements. It's an award that represents your development as a person, so you should seek experiences that will impact you as an individual. Success in the Rhodes process, or in any other scholarship application, will then come as an unexpected surprise and honour.

What were some of your summer projects?

At first glance, they look unconnected. One year, I spent a summer in West Yorkshire, studying the influence of landscape on Emily Bront�'s novel, Wuthering Heights. The next year, I researched the Hepatitis C virus. After that, I interned in the Health Action AIDS Campaign of Physicians for Human Rights.

In what way are these programmes connected?

I am interested in bringing something new to the field of medicine. I want to use my literary observations in my practice. And I want to use medicine to advance human rights in various areas including the global AIDS pandemic.

What about the Rhodes interview?

Many schools prepare potential Rhodes scholars for the interview. There are mock interviews and cocktail parties or social gatherings. This is great, but it is important not to over-prepare and thus lose spontaneity.

The interview committee changes from year to year. And they may be looking for very different things: it constantly varies. I think that most of the time they want to know you more as an individual -- who you are, how you behave in a variety of settings -- than as merely an accomplished person.

I also think that staying calm under pressure was a crucial asset during the interview process.

What were some of the tough questions you were asked?

I thought I would be asked a lot of questions on literature but actually got lots of ethical questions. For example, I was asked how I would deal with a situation where only 100 life-saving vaccines exist and I have over 500 patients. How would I go about choosing the 100? And how would you answer a question like that?

(Laughs) I think I gave a pretty clich�d answer. That was actually my last question before I left the interview, and I was too drained to think very originally. I said I would vaccinate some health workers, the elderly, and the very young.

But there were a lot of similar moral dilemmas posed to me.

How did you get to be idealistic?

As a child studying in Bombay (now Mumbai) for about six months (I grew up in England [Images]) I saw things which, although treated as commonplace by some, left an indelible impression on even my young mind. The hardship that disturbed me most was sickness, perhaps because its visible signs are so obvious.

My inherent aversion for the discrepancy between those who are privileged and those who are not originally drew me towards human rights work, while the idea of health drives my passion in this field. Because of this, I approach medicine through a medium vastly different from a microscope lens or pathology slide.

Many young idealists lose some, if not all, of their idealism as they grow up. Have you thought about it? I think of it so very often, and I am quite concerned about it.

I think literature certainly helps me to think about idealism and real life. Some of the best books I have read juxtapose idealism with a genuine understanding about human frailty.

And what are some of these books?

Both personally and professionally, my biggest fear would be: opportunities not taken. Forty or 50 years from now, I don't want to regret having missed an opportunity, a chance at something new.

You have been concentrating on vampires in literature and also the theme of blood poisoning. How did you get interested in the subject and how do you connect to your interest in medicine?

I study German literature, and horror elements figure largely in it. I always loved the legends about vampires; I think it's very interesting how these myths, not only from Eastern Europe, but from Asia as well, moved into the Western canon through early German authors and eventually British Romantics.

The idea of the vampire is fascinating: a creature who needs blood to survive, but also uses blood to corrupt others. It's been studied a lot as a political metaphor -- a foreign invasion of civilised society -- but I am looking at it from a scientific and medical perspective. Our modern anxiety about blood and diseases transmitted by blood can find interesting parallels in 19th century British literature.

Your parents are physicians. What have you taken from them?

Everything! But especially the concept of always being curious, always questioning. We often had debates at the dinner table. We didn't always agree, but there was always wonderful intellectual sparring. My father [Dr K Krishnan] would often play the devil's advocate, just to get me to think fast and defend my position on everything from politics to Harry Potter [Images].

You have said your mother is particularly a big role model to you. Could you tell us more?

My mother [Dr Vinodini Krishnan] works at the VA hospital. The veterans as patients, I think, bring something extra with them. Their experiences have such a powerful impact on their health; there are so many psychological and social factors to keep in mind when treating them.

My mother plunges herself into her work fully, and cares for each patient holistically, with incredible sincerity. She's truly shaped the kind of doctor I'd like to be.

You have traveled a lot. In what way travel has transformed you?

I was very young when my parents moved to England. We must have moved about four times before I was six. In America, too, I lived in several states before we moved to Texas. I think I discovered a long ago that I am nomadic at heart. And I travel very light (laughs).

Traveling has made me quite adaptable and helped me to watch people in various circumstances. I learned from my parents to look at patients as people first, and my travels have further instilled that thought in me.

If you weren't going to be a physician what would you like to do?

I think I would be a professor of English literature.

Of course. But I am not sure whether I would write fiction or non-fiction at first.

I was raised in a Hindu home but it was never ritualistic Hinduism. Growing up, I had some serious concerns about religious institutions and I still have them. But, recently, I have been drawn to the metaphysical and philosophical aspects of the Hindu religion.

How did you start on it?

I had taken a course in world religion at the university and that led me to think and read more about Hinduism. I began to be interested in its eclectic nature. I think that it is an essentially forgiving religion: it privileges many other religious traditions as equally good ways to reach the final destination. And it's very poetic!

I think it's extremely important to remember that pluralistic aspect of Hinduism, especially nowadays, when there is so much division.

What is the best thing you like about medicine as a profession?

I don't think you can be bored in medicine. It is a wonderful way to serve other people and a field in which there is much scope for transformation. But, most of all, it is the constant challenge of it that draws me; every day, with each different patient, a new narrative unravels before your eyes.

And the worst thing?

Because medicine is so much more than just hard science, it lends itself to holistic treatment: the body, mind, soul, and spirit. But this can also leave it open to corruption by so many different influences.

Medicine is no longer just the relationship between the doctor and the patient: a doctor must think about economic, political, and many other factors while simultaneously placing the patient's interest above everything else. This is a huge challenge.