Top leadership mantras from a President!

ussian President Vladimir Putin, a former Judo champion, says the sport is not just 'a sport but a philosophy', which taught him that strategy, not strength, matters.

You could use this, too, in your life! 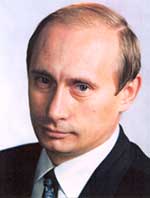 What Judo teaches you: "Judo teaches us that a seemingly weak partner can not only resist you, but can also beat you. It is not only strength that can change the result of a match. It is also the ability to think and use the right stance. What is very improtant is to have a strong character and a strong desire for victory," Putin said on the American television network CBS' News magazine programme, 60 Minutes.

Why Judo is not a sport but a philosophy: First of all, sports like Judo teach us about relationships between people and teach you to respect your partner.

Putin's life and career strategy: Putin worked 'very hard' to become a Judo champion in Leningrad, he said. "I think that if you do something, you should do it not only for the pelasure of the process but you should be results-oriented."

Putin, who was born into a 'family of workers', said his father and mother were just ordinary people. The three of them lived in a small room in a communal apartment in Leningrad with no private facilities.

They didn't even have a bath and a shower. "My parents worked a lot," said Putin. "So I spent a lot of time on the streets with other teenagers. It was just a normal, ordinary life."

The President's hobby those days were to chase rats with a stick, which led to a 'very interesting discovery': "If you corner a rat, it turns on you and attacks you. And a rat attacks aggressively. It even chases its adversary when they run away."

When shown a picture which appeared to show him being angry, Putin said, "I don't remember one time in my five years as President of the Russian Federation that I lost my temper. I think that this [losing temper] is absolutely uancceptable."

Leadership mantras: The former KGB agent said one had to be 'tough and consistent' in their actions. Without being tough it is impossible to be a head of state.

"It is important to take responsibility, and not hide behind your government, your law enforcement agencies, or your armed forces. That is what is important."