Did you say Ides of March? 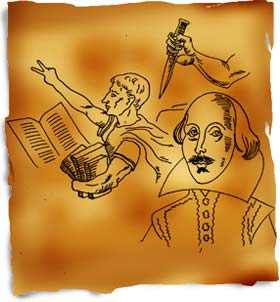 Sometime in March, a little over 83 years ago, the writer E M Forster took a trip to India, eight years after his first visit. I know little about what he did here, or whom he decided to spend time with, but the journey led to the publication of A Passage to India, his powerful exploration of colonialism and racism.

In 1942, again in March, John Winslow Irving was ushered into the world. He went on to study under Gunter Grass in Vienna, mentored the author Kurt Vonnegut and, in 1978, gave us – among other beautiful things -- The World According to Garp, his novel about the life and times of T S Garp, illegitimate son of a feminist leader.

I mention both authors simply because they feature prominently in this little look at the month of March, in the world of literature.

Not that there wasn't anything happening on other fronts, of course. Texas declared independence from Mexico, King Kong was premiered, Albert Einstein was born, Joseph Stalin died, Napoleon married Josephine de Beauharnais, John Lennon married Yoko Ono, and Alexander Graham Bell made the first telephone call. All in March. But what happened in literature?

It's surprising what a little digging can do. Apart from the ubiquitous birthdays and death anniversaries, I found, for instance, a number of poets and writers who had taken time out to comment on the month -- from an anonymous writer in 1889 ('Who in this world of ours their eyes, In March first open shall be wise...') to the poet Algernon Swinburne ('In fierce March weather, White waves break tether…') to Shakespeare's famous soothsayer in Julius Caesar ('Beware the ides of March').

It is the month in which Hemingway completed his Pulitzer Prize-winning The Old Man and the Sea, in 1952. The month when, in 1839, Charlotte Bronte refused to marry the Reverend Henry Nussey on the grounds that he would find her 'romantic and eccentric.' Also the birth month, in 1928, of Gabriel Garcia Marquez, father of what we now refer to – almost chronically, it would seem, going by current book reviews -- as 'magical realism.'

Da Vinci Code? What a yawn!

Virginia Woolf's first novel, The Voyage Out, was delivered in March. As was Mary Shelley's Frankenstein, on March 11, 1818. American beat author Jack Kerouac was born a day later, March 12, in 1922. The month also plays a role in the life of another beat alumnus -- Allen Ginsberg. On March 25, 1955, the US Customs Department confiscated copies of his book Howl, on the grounds that it was obscene. The poem is now a cornerstone of American literature, testimony to the counter-culture forces at work in the sixties.

In March 1923, James Joyce told his patron he had just begun a 'work in progress.' It was a book that would become Finnegans Wake, a whole 16 years later! Incidentally, that is about the time (March 14, 1939) John Steinbeck's The Grapes of Wrath was published as well.

F Scott Fitzgerald's first novel, This Side of Paradise, saw the light of day on March 26, 1920, and we all know how big he went on to be. Fitzgerald died in 1940. Eight years later, again in March, his wife and eight other patients at a mental hospital in North Carolina were killed in a fire.

Where Mumbai is muse

Henrik Ibsen probably didn't care too much for March. It saw the premier of his play Ghosts, in 1891, a performance that elicited over 450 articles in protest. Dickens must have had a soft spot for the month though. It was on its last day, March 31, that he presented the first installment of his first novel, The Pickwick Papers, in 1836. Apparently, 400 copies were printed. By the time Dickens sent in his 15th installment, the number had climbed to 40,000 copies.

All in all, a fairly colourful 31 days.