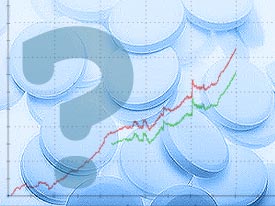 ou cut on your expenses last month and have some money to spare. You are excited about the thought of investing in shares and pharma stocks are in the news.

But you don't know where to begin and can't make head nor tail of what everyone is talking about.

You have no clue as to what's so hot about pharma shares.

Yet, you don't want to miss the bus (nor do you want to burn your fingers).

If that is how you describe your current situation, let's get started.

The question uppermost on the mind of every serious stock market investor is: Should I invest in pharma stocks?

The reason pharma stocks are centrestage is because the pharma industry is readying for an upheaval.

Don't dismiss it as technical mumbo-jumbo. This is what has put the pharma industry in the limelight (and this is what will eventually impact you as an investor).

When a pharmaceutical company invents a new drug, it can apply for and obtain a patent from the government. This patent gives the inventor the right to exclude other companies from making and selling their invention in that country.

India, however, only recognises and registers the process patent. This meant Indian companies cannot copy the identical process, but they can manufacture the same drug using another process.

Hence, most Indian pharma companies (with the exception of a few) are not involved in the actual discovery of new drugs. Instead, they work on the model of reverse engineering to earn their profits. Reverse engineering refers to the process of disassembling the entire production process to find out how it a product or drug is created and then duplicating it.

This involves breaking down a patented drug and substituting its chemical combination. If they come up with the exact combination of various chemicals, they just have to replace them with chemicals with similar properties. The result is the same drug.

So process patent means that another company manufacturing the drug of the inventor must change the raw material (at least a portion of it) and the processes.

Under the product patent regime, which is now under consideration in Parliament and will most likely become law, a drug patented by one company cannot be manufactured by another company. This means goodbye to reverse engineering. Companies can now file the patent for the drug with all the compounds and its associated chemicals.

Once the new law is passed, this will no longer be feasible. Now, if the innovator company has developed a product, then the product itself (and not just the process) is patented and cannot be replicated.

Incidentally, product patents did exist in India and was scrapped in 1971. At that time, multinational pharmaceutical companies dominated 85% of the pharma market. This figure dropped to 26% in 2004.

How will it affect the pharma sector?

Which, to you and me, translates into: How does it affect an investor who wants to invest in pharma companies?

Even as the new patent regime closes this easy road to profits, it might bring a windfall to many companies.

What about mutual funds?

If you don't want to enter the stock market directly, you can do so via a mutual fund.

Pharma funds (mutual funds that invest in the shares of pharmaceutical companies) were the darlings of 2004. In fact, they led the pack of equity funds in terms of returns.

Take a look at the figures if you don't believe it.

The winner was Magnum Pharma with a gain of 49 % -- clearly the best of the lot. It was followed by Franklin Pharma and UTI Pharma and Healthcare. The two new kids on the block were Reliance Pharma (launched in May) and JM Healthcare Sector (June).

Looking into the crystal ball

Drug makers have been readying themselves to remain competitive in a product patent regime.

Analysts are of the opinion that, for the next two years, the Indian pharma market will be driven by growth from generic manufacturers. MNCs will rule the roost from 2006 onwards.

The long term impact would be seen in terms of increased investment in research and development-related activities.

Others like Nicholas Piramal and Elder Pharmaceuticals have focussed on strategic marketing alliances and manufacturing capacity expansion.

Indian companies with strong marketing networks and well trained teams of medical representatives will be looked upon favourably by overseas companies for alliances under an agreement called 'in-licensing'.

Such an agreement allows Indian companies to market patented drugs produced by overseas companies. In return, the foreign partner gets a cut from the drug's turnover in India.

For instance, Ranbaxy Laboratories has several agreements including those with Atrix Laboratories and KS Biomedics. Nicholas Piramal India has about half a dozen agreements under its belt and is aiming for more.