Why you shouldn't flirt with the Sensex 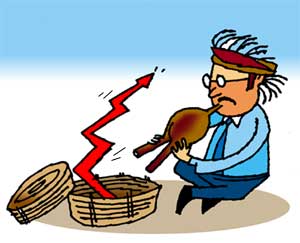 t was only a matter of time.

Just when the stock market was on a roll and everyone was having a ball, the Sensex began to fluctuate and throw tantrums -- share prices rose and fell rapidly.

Either you panicked or were happy with the situation -- depending on whether you wanted to sell shares or buy them.

The Sensex began the New Year with good tidings. On January 3, it touched a historic high of 6684.

The very next day, it touched 6696 as the prices of shares soared.

On January 5, it dropped slightly to 6629 and kept sliding till it touched 6440 on January 7 (I am referring to the highs here). It climbed slightly the next trading day, before it began dropping again.

Then, on January 12, Y V Reddy, governor, Reserve Bank of India, suggested a tax on foreign institutional investment to check the volatility in the stock market.

Like a jilted lover, the Sensex pouted for a while. And how!

It touched a low of 6070 taking share prices along with it.

As if on cue, Union Finance Minister P Chidambaram soon entered the scene to soothe frayed nerves. He said there was no proposal to put a cap on (limit) the inflows or tax them. What's more, G N Bajpai, chairman, Securities and Exchange Board of India, echoed the finance minister's assurances.

Instead of looking at who the party pooper is, or viewing all of this as a bad omen, it would be wise to shrug this slump off as the inevitable 'correction' that was to come sooner, rather than later.

Don't get intimated by this term. All it refers to is a relatively short-term drop in stock market prices.

This tends to happen when prices have been consistently rising for a period of time. It helps the market cool down when things get too heated.

Where does that leave you? Should you slip out of the party, stay on or decide to enter now?

Exit or hold on?

If you have already invested [bought shares], please don't panic. Don't rush to sell the shares you own. There is no reason for you to do so.

January may not have been as bullish as some anticipated. On the flip side, you don't have to strain very hard to see that times have been good. Even the strongest bull markets sees corrections from time to time.

"Volatility is natural in equity markets [the stock markets]. Given the kind of relatively unchecked rise we witnessed in the Indian markets post-May 17, 2004 [Black Monday], till recently, these sharp swings are inevitable," says Ashok Kumar, CEO, Lotus Knowlwealth, a Mumbai investment advisory firm.

Let's refresh your memory about what happened. Early 2004 saw the Sensex touch 6248.

Volatile markets are part and parcel of a bull run. So it should come as no surprise if the markets were to remain volatile (sharp rises and downturns in the Sensex), till the Budget and perhaps even thereafter.

Some feel the market will rebound (bull run will resume) by the end of this month, but there is no denying that volatility will stay till the Budget (February 28).

Analysts vary in their long-term predictions of what heights the Sensex could scale this year. Calculations vary from 6800 to 8000 by the end of the year. There is huge discrepancy in the figures, but what is clear is they all see an upward trend.

So here's what you can do. Don't sell now unless you are getting a price that makes you happy. If not, continue to hold on to your shares. The Sensex will rise and you will get a good deal later.

Prices have dropped. Why not pick up shares now?

This appears to be a good time to buy the stocks you wanted but didn't earlier, when the market slumped earlier this year.

But, as Nimish Shah, director and CEO, Parag Parikh Financial Advisory Services Ltd, observes, "Investors would require nerves of steel to hold on to stocks they like as the market is expected to remain volatile."

His word of advice: "Have faith -- first in the economy, then in the company you want to invest in, and last, in your own judgement."

Problem? It is anybody's guess when the market will bottom out. This is a suave term used to describe the moment the index hits rock bottom before it starts moving upwards.

Truth is, no one knows when 'rock bottom' has been hit. Everyone is groping in the dark when they make predictions on whether you should buy now or wait till the market drops further.

As an investor, you need to be both cautious and alert.

Consider buying shares only if you are looking at holding on to them for a year or more (12 to 15 months is a safe bet).

Consider a staggered accumulation strategy: buy gradually, instead of buying at one go. Buy some shares now, wait and see what the market does. If prices fall further, buy more shares.

A strong word of caution

The Sensex has turned fickle. Be careful not to flirt with the market right now.

If you are serious about investing in the market, look at a long-term commitment. You could get lose your shirt if you are thinking short term.

DON'T MISS!
• What's in a share? Money!
• Make money with shares
• What to do with your money