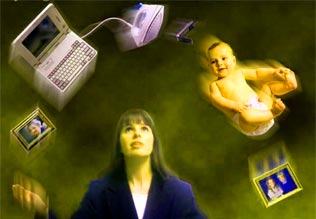 t is a much revered skill at the workplace today.

But how do we define multitasking?

Does it mean doing several things at the same time?

Does it entail juggling several jobs or assignments?

Does it mean having diverse skills and making optimum use of them?

Attempts to multitask can be honed and polished into a fine skill by some and could just backfire with others.

This is what some senior professionals have to say about the task of multitasking.

First: The myth: Women and multitasking

No, multitasking is not necessarily a skill that comes easily to women.

Granted, it began with the homemakers (woman or man; in most cases, women) and has now travelled to the work desks, cubicles and chambers of most offices.

Both men and women avail of this skill.

But the degree to which they do so is debatable.

Men come into the picture much later.

Some do it often. Others do it when necessary and a few (especially males) choose where and when they plan to do it --- at home or at work.

Popular perception as well as general surveys point to the fact that multitasking could lead to workaholism and even burnout. But this also happens to be directly proportional to the number of hours spent at office or at work. And the pace of your professional life.

Most professionals tend to offer their own antidote to this modern menace of 'racing against the clock' syndrome.

"One learns to deliver one's immediate requirements and move on to others. I may manage more than just one fund; present a particular fund to the investors; defend my handling of such a fund to the media and do many add-ons that enhance my job profile," he explains

For Anjali, multitasking involves "effective time management," striking a balance and finding your own comfort zone.

For Vedika, the sheer passion of involvement or enjoying the fact that "you can make oneself more useful and do many things and attend to various needs at varying levels" adds to her sense of job satisfaction.

Third: Multitasking and You

Yes, that makes all the difference.

The job you hold, the amount and kind of responsibilities delegated to you, the number of hours you can spend and the quality of work you can deliver.

Your strengths and limitations, your ambitions and needs: You choose how much, how fast, how often and how many.

Says Anjali, "My job involves long hours and travelling. There was a time I was struggling to meet my deadlines.

"But you learn to improvise and innovate. I took my eight-year-old child to the hotel where I had to be present for a project. My husband was away on work.

"I dropped him at the in-house health club after telling the attendants to keep an eye on him and would come and check up on him after an hour or two."

Vedika, on the other hand, had promised her daughter she would attend the Occupation Day held at her Montessori school and watch her play Bob the Builder.

But she, too, had a very important meeting to attend the very same day. "I had to do some sharp planning. I attended the meeting, slipped out for an hour or so in-between to watch her in action and was back again to rejoin the meeting in progress."

Men might have less to worry about household matters when it comes to multitasking. "I can afford to be a little lazy about my domestic responsibilities and get away with it," says Sanjay in a jocular vein.

But what does it say about your job?

Some of us are happy doing the same thing over and over again and getting paid for it at the end of the month.

Some of us need more out of our work.

"Multitasking at your current level leads to other levels and that is a natural progression. The 'challenge' factor keeps you going. You can do other things and do them well," observes Sanjay.

There is another kind of multitasking where your family, social life and private moments jostle with each other to find their own time and space.

"Sometimes I wish I could clone myself and be present at several places at the same time!" says Vedika.

For Anjali, the horror of the very idea of doing the 'same old boring' thing keeps her on her toes and her fingers in many pies!

You might find yourself constantly having to choose between 'this' and 'that'.

"My child has become more independent and self-reliant today. He knows when I will be around and when I won't, and plans accordingly," says Anjali.

"My day is full of reviews, planning, recruitments, meetings," adds Vedika. "I gently but firmly let my family members know when I will be there and when I won't be able to make it. The same goes to meeting clients at work."

One has to be tactful, of course. But honesty is the key to doing more than one thing and being present in more than one place at the same time.

The friends who matter and understand would not mind.

It is you who has to make the choice.