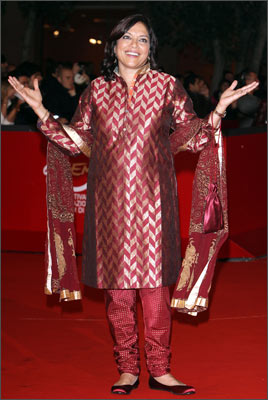 What is Mumbai's relation to New York?

Well, that is what two of the most prominent Indo-American cultural figures -- director Mira Nair and author Suketu Mehta [Maximum City: Bombay Lost and Found] will discuss on November 7 at the Times Center, in Manhattan.

The event called Bombay/NY: An Evening with Mira Nair and Suketu Mehta, which is presented in collaboration between Museum of the Moving Image and the Mahindra Indo-American Film Festival, will include a conversation moderated by the Museum's Chief Curator David Schwartz, a screening of Nair's short film Migration, and a reading by Mehta from his book, Maximum City.

Nair, whose acclaimed films include The Namesake [Images], Monsoon Wedding [Images], and Salaam Bombay!, is collaborating with Mehta on several film projects.

The programme is part of the Mahindra Indo-American Film Festival, from November 5 to 9, presented by the Indo-American Arts Council. The festival features New York and US premieres of independent Indian and diaspora films, panel discussions, and special events.