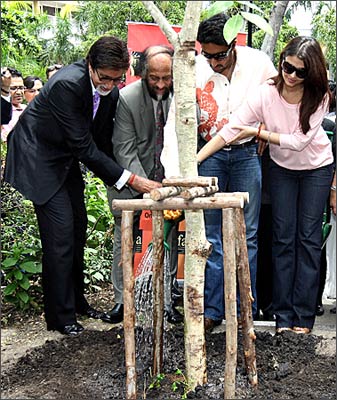 The International Indian Film Academy Awards, IIFA, began on a high note in Bangkok as the Bachchan Parivar arrived in the Thai capital to attend the annual event.

Conspicuous by their absence are the Khans of Bollywood -- Shah Rukh [Images], Aamir and Salman.

Sources say Wizcraft, the event management company which oversees IIFA, is trying to bring at least Salman to the event, apparently even promising the star an exhibition of his paintings.

Whether Salman can make it is anyone's guess as the actor is busy with his latest film, Main Aur Mrs Khanna and his television show, Dus Ka Dum, which goes on air today on Sony.

Image: On the first day of the IIFA Awards, Amitabh, Abhishek and Aishwarya plant a tree, along with Dr Rajendra Kumar Pachauri, chairman, Intergovernmental Panel on Climate Change, which jointly won the 2007 Nobel Peace Prize with former United States vice-president Al Gore [Images]. The event was meant to spread awareness about global warming.