Or if you actually have seen HBO's sensational comedy show Flight Of The Conchords, then more power to you, mate. I just had to spread the word.

It's a hard show to describe, to be honest. Technically, I guess calling it a 'musical sitcom' would be most accurate, though that doesn't come anywhere close to capturing the sheer genius abundant in this tiny little show about two lame New Zealand [Images] musicians.

Created by James Bobin in collaboration with Bret McKenzie and Jemaine Clement -- who play completely loser-ified alter egos of themselves on the show -- the premise is that of Bret and Jemaine living in New York and peddling their band, the FOTC, searching earnestly for gigs and girls. They are accompanied quite crucially by the Deputy Cultural Attache at the New Zealand consulate, Murray Hewitt (played by Rhys Darby) -- who also happens to be their manager. 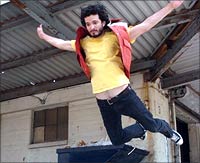 On a very basic level, it is the kind of plotline that can wear quite thin indeed -- the humour predictably built around moments of extreme social awkwardness, 'we-aren't-Australian' jokes, and Americans whose only reference point to New Zealand is Peter Jackson's The Lord Of The Rings trilogy.

Yet the humour here is exceptionally quirky, constantly surprising and very, very hard to resist. Just like the New Zealand Tourism posters popping up in the background: 'New Zealand: Don't Expect Too Much, You Will Love It,' reads one, while another, with big white letters over much mountainous terrain, exclaims, simply, 'New Zealand... rocks!!!'

And the songs, the songs. The musical format is used both as organic, when they start jamming out a song around their dining table, or unapologetically surreal, when the entire show suddenly transforms into an 80s ballad video or a madly futuristic Bowie take-off.

The lyrics are maddeningly brilliant -- 'I'm not crying / It's just been raining... on my face,' sing the boys with hilarious sincerity after first-episode heartbreak -- and their approach is earnest, which is what makes it work. Clearly Bret and Jemaine are deluded enough to believe in their music, and, more importantly, the words they're stringing along together.

The fact that they're very talented musicians who can capably sculpt send-ups of varied songstyles -- everything from Duran Duran to gangster rap -- ensures that while the songs are ridiculously funny, they also make for pretty darned good listening.

The Conchords songs came before the series -- winning the Grammy Award for Best Comedy Album -- and the show was written around them, which is what makes for 12 staggeringly brilliant episodes perfectly mixing zany, largely understated humour, and loony songs that have led to the band gaining massive YouTube-aided popularity worldwide.

The performances are very tight, and the characters are superbly etched. Bret is the 'small,' pensive pushover, while Jemaine is both more assertive and more asinine. Things really get exciting with the supporting cast, though, led by Murray soldiering on as their devoted consulate-neglecting manager, more a 'third Conchord' than any bongo player could ever be. 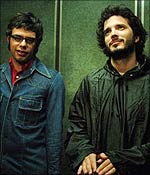 Murray's character -- akin to the inimitable David Brent from The BBC's marvellous The Office -- gives the show its funniest, least expected moments, as well as one of its best songs. (Look up 'Leggy Blonde' and 'Conchords' on YouTube and prepare for the day's biggest laugh, guaranteed.)

Then there's Mel (Kristen Schaal), the band's one-and-only fan, a married Psych professor eagerly stalking the Conchords and staking out their street when she can't see them at their gig -- they play the local aquarium. Yeah, it's that scale of band, one that uses a mobile phone to record a music video, and calls sneaking mixed nuts from the hotel minibar 'a caper.'

Seriously, I don't want to say anymore. Discover this one for yourselves, you'll love it, right from the constant 80s movie referencing to the ever-important roll-call before the band meetings. Call in those favours to foreign-returning buddies, this DVD is essential.

Flight Of The Conchords is the kind of show that demands extreme reaction. Either you are exhausted by the musical format, by these guys bursting into songs mocking (usually) bad songs, and don't want to listen to the lyrics -- and you'll likely just be bugged by the series, and its repetitive conceit.

Or -- like me and Weird Al Yankovic and the late great Frank Zappa -- you'll sit and laugh your head off and bless the fact that yes, Humour Does Indeed Belong In Music.

What's the funniest show you've ever seen? Are you a Fawlty Towers fan or a Blackadder maniac? Or are we going to talk about the best of Seinfeld [Images]? Come on, fellas, recommend! Write in with suggestions or anything else you're in the mood to talk about at senterfold@rediffmail.com. Catch ya next week, cheers.