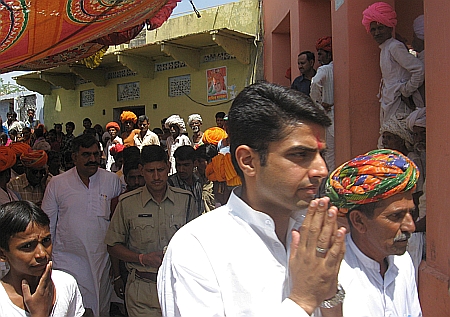 Rediff.com's Krishna Kumar P caught up with Congress MP Sachin Pilot during his campaign in Naseerabad, Ajmer, Rajasthan, a constituency from where he is contesting for the first time.

How and why did you choose Ajmer when Dausa, your Lok Sabha constituency, was reserved after the delimitation process?

It is not a question of my choosing. Post delimitation the party had to decide (where he would contest the election) when my constituency got reserved. Dausa is a constituency that has given the Congress victory eight times in the past. The party spoke to the workers and decided in discussion with the local leadership that I will be a good candidate for Ajmer.

I am very happy that I have been given an opportunity to prove myself here, and I am quite confident that I will register a win for the Congress party.

You are out of your comfort zone. Whatever work you did was in Dausa, but you now have to ask for votes as a fresh candidate...

My comfort zone is people and farmers... the young people in rural areas and small towns. Geographical boundaries are only in maps. Wherever people have affection and regard for me, I will work for them.

Also, my family has had a long association with Ajmer. I have also been coming here quite a lot though this is the first time I am contesting from here. So, I know the people and have had a tremendous relationship in the past.

People here are looking for development. I want to provide that and take Ajmer to where it should have been. It has got so much potential. That is why I am working with development as the focal point.

People here also talk of lack of development though the sitting MP has been around for five consecutive terms. But when you ask them who they will vote for, they say it will be for the candidate from their caste. Even a young candidate like you is not free from the machinations of caste here...

That is why we are starting to make a fresh beginning in Ajmer. We want to create an atmosphere where caste and religion don't dictate to the people whom to vote for. I am taking every section together. Ajmer is a place which is represented by Sindhis, Hindus, Sikhs, Muslims etc. There are about 45 to 50 communities. But they have been living in harmony.

So Ajmer is a shining example. Of harmony and how different communities can live together. That is why I am saying people are going to transcend all these barriers and vote for development.

Are you trying to break the shackles of caste?

If and only when we are able to achieve that, will the young and the educated come into public life. Only if you are able to do that, will it be of any use. That is what I aspire to do. I want to mark a new beginning.

Talking about youth, how much of a part have young MPs like played in Rahul Gandhi's [Images] plans to revive the party?

We all worked together. I am in a few committees Rahulji heads and is part of. As a colleague in Parliament and in charge of the Youth Congress, we have worked and made tremendous headway in re-energising the youth and the cadres. There has been a remarkable difference in the number of people getting into the Congress ideology in the recent past.

The idea is to get young people to be a part of public life, part of the Congress without them having to go through people they know or requests from known politicians. Earlier, the roads for a youngster aspiring to enter public life were limited. Now we have opened the flood gates.

This plan of reviving the party comes at a huge risk of losing power.

Absolutely. Power is only temporary, but the party is the strongest base on which politicians like us can work. Rahulji is completely correct. We are doing what it takes. We also feel there is a need to take the bottom-up approach in these areas to ensure that complacency does not set in.

It is the youth who will charter a new beginning for the party and nation.

Though much lip service has been paid for the importance of having the youth in its fold, not a single young leader was drafted in the UPA (United Progressive Alliance) government till the fag end of its term, when Jyotiraditya Scindia was inducted.

Not at all. We had young people even before that. But your definition is limited to five people. It is only a few who are talked about a lot. Youth is being young, both in age and thinking. It does not necessarily have to be people from certain families or with certain last names. That is easily recognisable.

The feedback and inputs from all kinds of youngsters is what drives the party.

They as a constituent are quite significant. Even in these elections, 43 million people are first-time voters. Our interest lies in ensuring a lot of them come out to vote and become a part of the nation building process. The Congress has opened up membership to all and everyone. We have had a very democratic set-up and had Youth Congress elections in states like Punjab, Gujarat and Uttarakhand [Images]. People have joined in lakhs.

In case the UPA gets another shot at power, what role do you see for youngsters like you?

Our first aim is to ensure that Dr Manmohan Singh [Images] becomes the prime minister. And I am sure he -- like before -- will take us along and make the youngsters stakeholders in the government and nation building.

You've seen Delhi [Images] and places like Dausa and Ajmer. What do you think is the difference between the India of Delhi and that of Ajmer?

My biggest worry is that we are creating two Indias.

But they already exist!

And they are getting more and more different. The chasm is getting bigger. The rich are getting richer and the poor are getting poorer. The top-most priority for any government must be to bridge that gap.

If you see, the divide is greatest in terms of sharing resources and economic empowerment. Villagers, farmers, the minorities and the marginalised people, women, and the people in the fringes, they need to get the resources. But I feel this division will get blurred in the next few years.

What do you think is the standout for rural and interior India? Its biggest strength?

We have a farming community that is so hard working. We feed a country of a billion people. We have that much sufficiency in food grain. They have put in a lot of effort and in terms of input. But they need tools like agricultural implements, seed and fertilisers. Unless we give our farmers these tools, we can't expect them to take on the Western world.

Another thing is that the economy in rural India is very vibrant. A lot of it is consumption driven and the rural parts are self-sustaining. In a sense that is why they have been able to insulate themselves from the global meltdown.

UP schemes like the RTI (Right to Information Act) and NREGA (National Rural Employment Guarantee Act), though good in intent, have been a bit of a disappointment when it came to implementation. Why did it go wrong?

We have had a few teething problems. But the mandate that the government has give to people in terms of legislation is very, very appreciable. Legislation like the NREGA, RTI, land for tribal people, farm loan waivers and the Jawaharlal Nehru Urban Mission are historical legislation. During our term the social sector spending has increased manifold.

What in your view are the deficiencies of our contemporary political system?

As a political class we have to be more accountable. Be more sensitive to the needs and aspirations of all sections, especially young people.

We focus on development issues, rather than as I earlier said the divisions on the basis of language, culture and religion. We can't afford to be divided so much and concentrate on nation building. The time when religion and caste-based politics used to pay off is over. That time is over.

But such elements do keep winning...

It is becoming less and less. In the coming years, all these people will get more and more marginalised. The people who focus on development, progress, harmony, and taking people along are the ones who will sustain.

Your record as a parliamentarian has not been very good. The number of questions you have...

(Interrupting) I don't believe in statistical analysis. The only way people are going to judge me based on whatever I may have done or not done is on polling day when 20 lakh (2 million) people in their collective wisdom vote for or against me. That is a mandate I accept. I accept criticism, but it is for the people to decide.

I have done my best. It is up to you to judge. It might be less or more or better than others. Your judgment and view will have a limited impact. It is not for journalists and colleagues and friends. It is for the people to view it. Ultimately, my performance outside as well as inside Parliament is for my people to decide.

When the Gujjar agitation was on, there was a whisper campaign about you not doing enough and not speaking out. That you were a silent spectator...

I have always raised my voice against people who act against humanity. The issue was that of reservation and it became a human issue. 70 people were shot dead. I am against the government using violence and State power to suppress any agitation. That is something that the BJP (Bharatiya Janata Party [Images]) till date has not repented for.

Not a single enquiry has been conducted. People on the fringes, of whichever community, deserve the help of the State. And affirmative action is mandated in the Constitution.

We have millions of people who have no access to our resources. They must not be discriminated against because of their ethnic background, or caste. No one is against affirmative action. It must be targeted at the needy. When people are using that as a political tool and creating divisions, that is what I have spoken against.