Rajneesh Gupta checks out The Master's unknown records and milestones. When he made his Test and One-Day International debuts in 1989, Sachin Tendulkar was the youngest to appear in these formats for India. He is still the youngest debutant for India in Tests as well as in ODIs.

Tendulkar's first Man of the Match award in a Test was at Manchester in 1990 and he got a Magnum champagne bottle as the prize. He preserved it for eight years before finally uncorking it on his daughter Sara's first birthday.

For seven years after making his Test debut, Tendulkar remained the youngest player in the Indian Test team -- a stretch that lasted for 42 Tests.
The first time Tendulkar was not the youngest member of the team was in the Ahmedabad Test against South Africa in November 1996 when V V S Laxman -- making his Test debut at 22 years, 19 days -- wrested away the honour from the Mumbai right-hander, who was 23 years, 210 days old at that time.

Between his 17th and 25th birthdays, Tendulkar played in 239 consecutive matches for India (54 Tests and 185 ODIs) without missing a single game -- a world record.

Tendulkar is the only player to score an ODI hundred in a tournament final on his birthday. He did so against Australia in the 1998 Coca Cola Cup in Sharjah smashing 134 off 131 balls.

Tendulkar was the first Indian player to score a century and take four wickets in the same one-day international game. He did so against Australia at Dhaka in October 1998 in an ICC Champions Trophy match.
Batting first, he made 141 off 128 balls, then took 4/38 in the Australian innings.

In 1998, Tendulkar won 12 man of the match awards in ODIs -- the most by any player in a single calendar year. 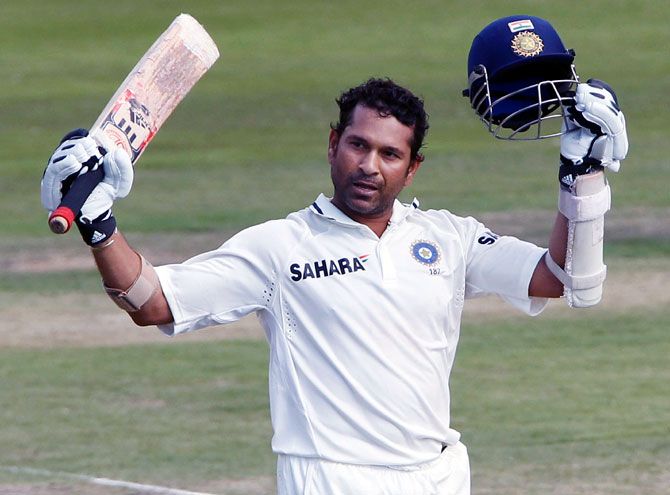 Launched in 2009 by a company founded by former investment banker Karl Fowler, a book on Tendulkar, Sachin Tendulkar Opus, is believed to be the most expensive book on cricket.
The first copy of the book, which weigh 37 kilos, with pages edged in gold leaf, attracted a bid of $350,000.

At the time of making his final appearance in Tests and ODIs, Tendulkar had played in 42.19% of all the Tests and 57.58% of all the ODIs played by India!
Nearly 25% of all centuries made by ALL Indian batsmen in ODIs had come from Tendulkar's bat when he retired from this format in 2012.

In his last game across different formats (Tests, ODIs, T20Is, IPL, Champions LeagueT20 and Ranji Trophy) Tendulkar has ended on the winning side!

Tendulkar played Test cricket with 602 players (110 team-mates and 492 opponents) -- the most for any player in Test cricket.
He played 146 Tests with Rahul Dravid, 122 with Anil Kumble, 120 with V V S Laxman and 103 with Sourav Ganguly.
Nayan Mongia played all of his 44 Tests with Tendulkar!

Tendulkar played ODIs with 866 players (123 team-mates and 743 opponents) -- the most for any player in ODI history.
20 out of Tendulkar's 123 different team-mates had made their ODI debut before him, while as many as 101 made their debut after him.
Two players -- Salil Ankola and Vivek Razdan -- made their ODI debuts along with him.
Tendulkar played 245 ODIs with Anil Kumble and Rahul Dravid, 238 with Sourav Ganguly, 223 with Mohammad Azharuddin and 204 with Javagal Srinath.
Venkatapathy Raju played all his 53 ODIs with Tendulkar!

The 50,192 runs scored by Tendulkar across all formats (first class, List A and Twenty20s) are the most by a sub-continent player.

Tendulkar scored ducks in his first two ODIs. He ended his ODI career with innings of 114 and 52.

Steve Smith dismissed Tendulkar with the first and the only ball he bowled to him in Tests!

Tendulkar has the longest career span (22 years, 91 days) for any player in ODIs and the fifth longest career span (24 years, 1 day) in Tests.
He is the only player to score Test centuries more than twenty years apart. Don Bradman's first and last three-figure scores came 19 years, 7 months apart.