Only 5 batsmen have hit a six to take their team to victory when they needed 4 or more off the final ball.
Rajneesh Gupta gives us the numbers. 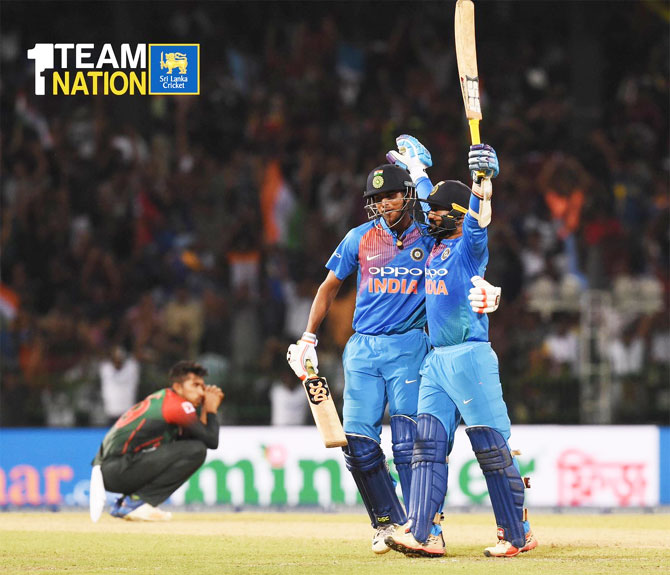 IMAGE: Dinesh Karthik is congratulated by Washington Sundar after he hit the match winning six off the last ball in the Nidahas Trophy final against Bangladesh, March 18, 2018. Photograph: Kind courtesy Sri Lanka Cricket/Twitter

Dinesh Karthik's incredible hitting gave India a thrilling 4 wicket win against Bangladesh off the last delivery of the match in the T20 tri-series final in Colombo on Sunday.

Chasing 167, India were on course for a comfortable win having scored 81 runs in the first 9 overs.

K L Rahul's dismissal in the 10th over hurt India as his wicket was followed by a period of slow scoring.

With Manish Pandey struggling to rotate the strike, skipper Rohit Sharma tried to break free, but perished trying to play a big shot.

For some inexplicable reason Vijay Shankar -- who had not batted even once in the tournament -- was sent ahead of Dinesh Karthik.

Shankar was unable to use the long handle even as the asking rate kept increasing.

With Pandey also struggling to hit boundaries, the game was in danger of slipping away from India.

India had the improbable task of scoring 34 runs from the last two overs.

Rubel Hossain -- who had bowled well till that point -- came on to bowl the 19th over.

Facing his first ball, Karthik promptly dispatched him for a six over long on.

The next five balls read 4,6,0,2,4 with all runs coming off Karthik's bat as the right-hander went on the attack right from the word go to bring India back from the dead.

India needed 12 runs off the last over, which seemed possible even with Shankar on strike. But Shankar's struggles continued against part-time medium pacer Soumya Sarkar much to the annoyance of Indian fans.

With the first three balls producing only three runs, all seemed lost for India.

Shankar finally scored a boundary through third man, but was caught off the next ball at long-on trying to hit one out of the ground.

India needed five off the last ball with Karthik on strike.

Sarkar had bowled well till that point, but the pressure got to him as he bowled a wide overpitched delivery which Karthik smashed over the extra cover boundary for a flat six, giving India an improbable victory.

There have been a dozen instances in international cricket of a batsman hitting a six off the last ball of the match to win.

However, only five of them (including Karthik) have done so when their sides needed four or more off the last ball. Have a look: 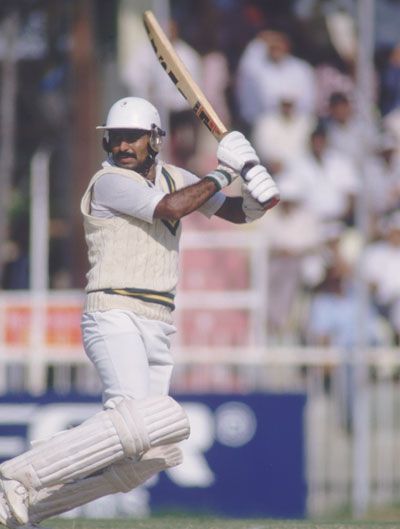 Chasing 246, Pakistan had a sluggish start, before Miandad steadied the innings.

Wickets kept falling at the other end, but Miandad kept them in the hunt with a brilliant century.

11 runs were needed off the last over. Ideally, this over should have been bowled by Kapil Dev, but he had already completed his quota.

So it was the inexperienced Chetan Sharma who had the responsibility of bowling the last over.

The over was eventful. A run-out on the first ball, a boundary off the second, excellent fielding saving a certain boundary off the third, a mindless slog leading to a dismissal off the fourth, the easiest of run-outs missed off the fifth (that would have given India the trophy).

The equation boiled down to a four off the last ball.

Miandad took his time, checked where each fielder was placed, leaving nothing to chance.

Sharma tried for a yorker. His thinking was perfect, but the execution was poor. Or perhaps he was put off by the fact that Miandad was standing well out of his crease.

Whatever it was, the ball ended up a juicy full toss for Miandad at the right height and all he had to do was take a swing.

Even before the ball cleared the midwicket boundary, Miandad had sprinted off the pitch to celebrate a famous Pakistani win. 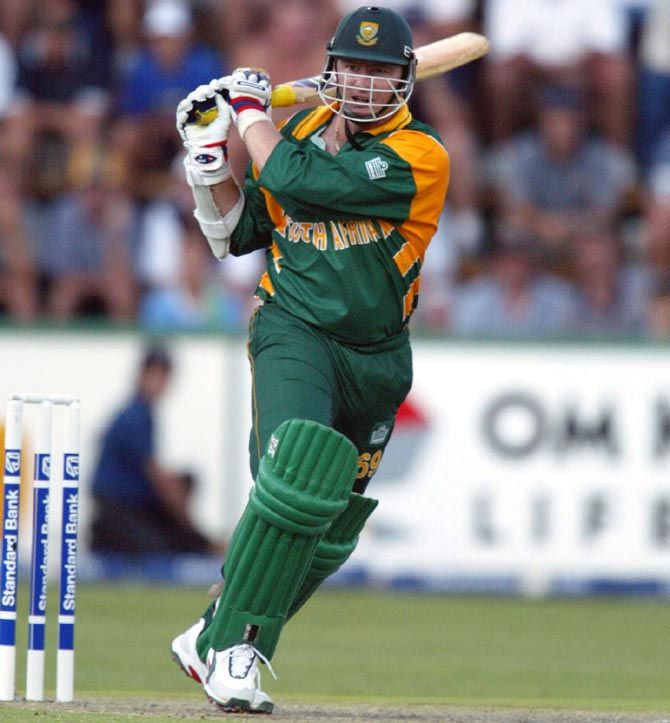 South Africa were chasing 192 in a match reduced to 40 overs because of rain.

11 were needed off the final over bowled by Dion Nash with three wickets in hand.

Only seven runs came off the first five balls.

Klusener was on strike for the last ball with four needed.

Nash tried to bowl a yorker, missed the length slightly and Klusener smashed the low full toss over long on for a six as his team-mates charged onto the field to celebrate a remarkable win. 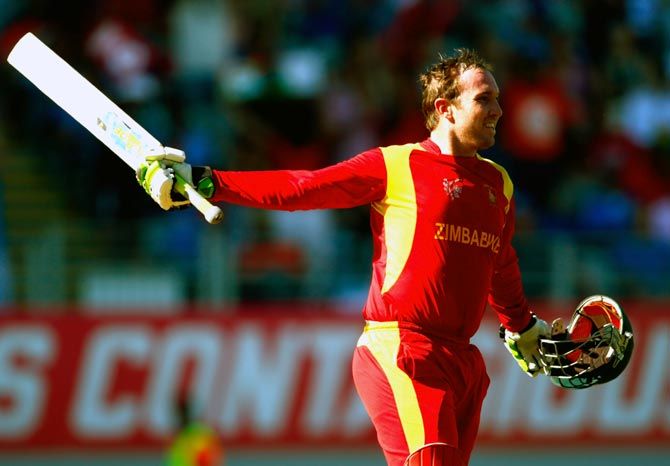 The series was tied at 1-1 when the two teams squared up in Harare.

Brendan Taylor and Tawanda Mupariwa scored 11 runs off the penultimate over, leaving 17 off the last.

Mashrafe Mortaza bowled the final over.

The Bangladesh pacer was hit for a six off his second ball and it came down to nine runs off the last three.

Taylor hit Mortaza for a four and was then involved in a mix-up with Mupariwa that ended in the latter being run-out.

With 5 needed off the last ball, Taylor dispatched the ball over mid-wicket for a six to give his team victory. 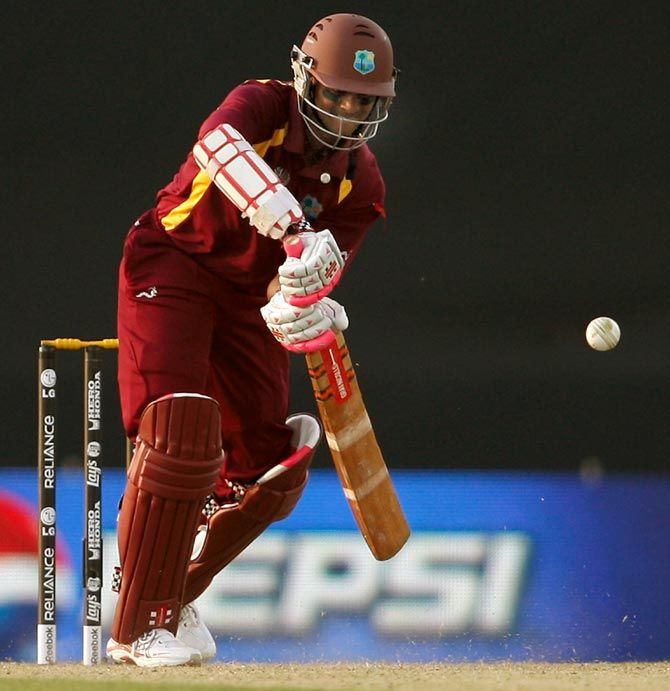 Chanderpaul -- the most surprising entry on this list -- is known for his conservative batting style.

Even more surprising is the fact that Chanderpaul did so against Chaminda Vaas who was deadly accurate with the ball.

The West Indies were 9 down and needed 13 off the last over.

The first four balls produced only three runs, leaving the Windies to get 10 from the last 2 balls.

Chanderpaul took charge, hitting a 4 through long off, and then hoicking the last ball over the midwicket fence to give the West Indies a thrilling win.

In 1992, Pakistan needed 6 runs off the last ball to tie the game against Australia at Hobart. Asif Murtaza hit Steve Waugh for 6 to level the scores.