One cricketer made all the difference when the first All India cricket team toured England in 1911.
Baloo Palwankar startled the English with his guile and genius.
A fascinating excerpt from Prashant Kidambi's Cricket Country: The Untold History Of The First All India Team. Only one Indian player ended the first half of the tour with his reputation enhanced.

Baloo Palwankar established beyond any doubt that he was the greatest Indian bowler of his generation.

Statistics, that ubiquitous yardstick of sporting achievement, offer incontrovertible proof of his success.

By the time the Indians arrived in Leicester, Baloo had sent down 334 overs -- more than any other player in the side -- and was their leading wicket taker with sixty victims in eleven matches.

Significantly, in many of these games, Baloo had only one crack at the opposition.

And four times he narrowly missed out on this honour, with figures of 4-96 against the MCC, 4-74 against Warwickshire, 4-100 against Surrey, and 4-127 against Yorkshire.

The ageing Baloo's bowling feats are remarkable considering that this was his first experience of English playing conditions.

It would appear that he might have even had more wickets, but for poor captaincy and field placement. 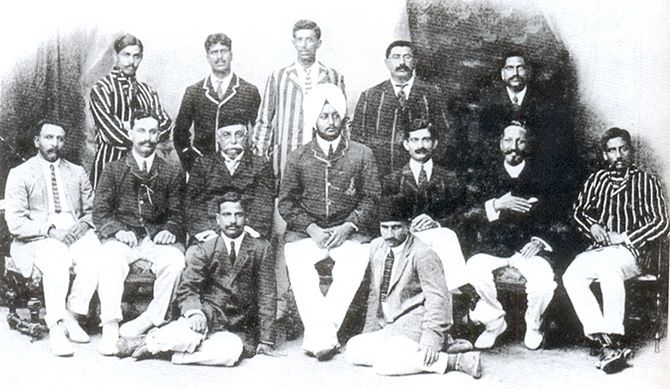 IMAGE: The All-India cricket team, photographed at Bombay on the eve of their departure to London, May 1911.

According to E H D Sewell, Baloo 'was taken off when bowling very well indeed, and lost wickets through having his field in all sorts of incredible positions'.

Sewell also pointed out how in favourable conditions at Old Trafford, Kanga chose to open the attack with Warden and Bulsara despite 'ample proof' that Baloo was 'by a very long way his best bowler'.

Stray remarks in Vithal Palwankar's autobiography also suggest that Baloo was not entirely happy with the manner in which he was treated by Kanga.

On one occasion, the bowler asked the captain for a specific field placement and was brusquely turned down.

The very next ball a catch landed on the very spot where Baloo had wished to station a fielder.

According to Vithal, his brother chose quietly to carry on bowling rather than remonstrate with his skipper.

'Balu's slow ball and his indefatigable uncomplaining disposition will long be remembered by all who have played against the native team,' declared Sewell.

But the Dalit stalwart's best was yet to come.

'The most unfortunate county this year is Leicestershire,' remarked the Manchester Guardian a few days before their match against the visiting Indians. 'They have frequently played a really fine game, and yet they have sustained twelve defeats and have yet to score their first victory.'

The Indian cricketers, at the mid-point of their tour, thus encountered a team with an identical track record. 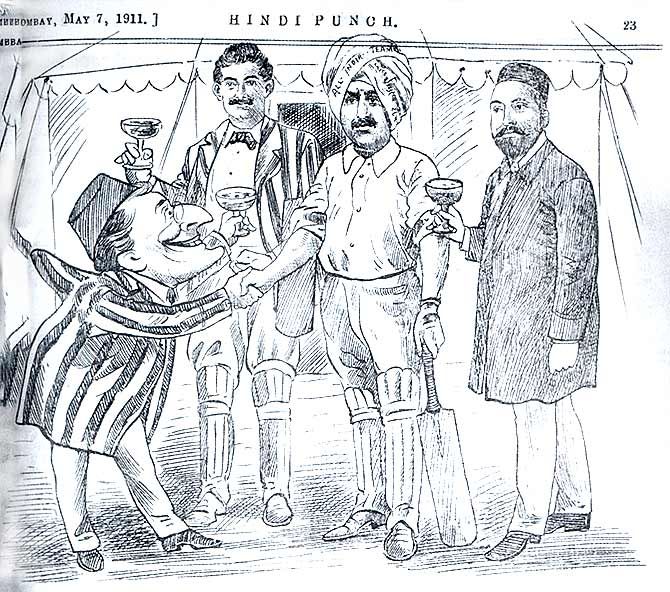 IMAGE: A cartoon depicting the farewell ceremony arranged for the departing Indian cricketers at the Orient Club, Bombay, on May 4, 1911.

Like the Indians, Leicestershire too had problems off the pitch.

'Whatever may have been their failings in their twelve engagements prior to visiting the County Ground, Leicester, yesterday, the All Indians, as they are termed, gave us then as pleasing an exhibition of cricket as we could wish to witness,' reported a local newspaper after the first day of the match.

Batting first on a friendly pitch, the Indians got off to a flying start.

Kanga, recovering from a hand injury, and Meherhomji put on a brisk opening partnership of 178 runs. The Indian captain went on to make 163, and his team ended the day on 431-9.

The following morning, the Indians innings ended on 481, with Shivram falling short of his century by 15 runs.

It was his first notable score since the match against Warwickshire.

When the Indians took to the field, Baloo and Salamuddin bamboozled the Leicestershire batsmen, taking 5 wickets apiece.

'Each man bowled intelligently, and seldom sent down a ball for hitting purposes,' wrote one correspondent.

Bowled out for 283, Leicestershire had to endure the ignominy of the 'follow on'.

Another magnificent bowling performance from Baloo, who took 6 wickets for 93 runs, enabled the Indians to get rid of the home side for 248 in their second innings.

The Indians knocked off the 51 runs required to win the match for the loss of three wickets. The local press was quick to congratulate the Indians on their first victory.

'It was a capital performance, as it was brought about by all-round good cricket and play quite superior to much that has been seen at Ayleston Road this season,' declared the Leicester Daily Post.

But the headline in another newspaper best summed up the visitors' triumph: 'A HULLABALLOO!' declared the Star.

Their comprehensive triumph over Leicestershire galvanised the Indian cricketers. 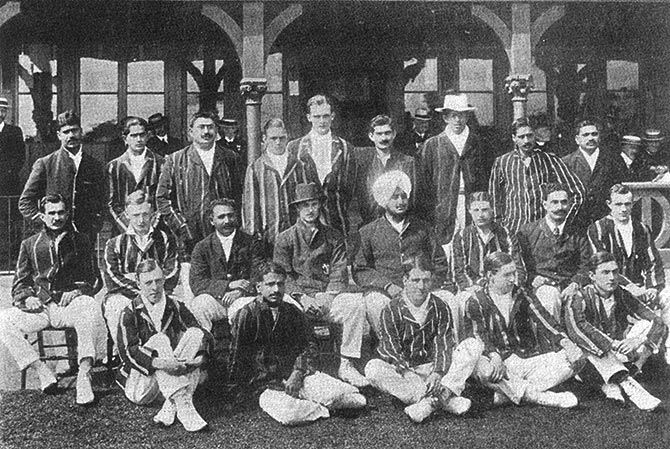 IMAGE: A rare photograph of Maharaja Bhupinder Singh with members of his cricket team, Oxford, June 1911.

In the very next match, they prevailed over Somerset in a nail-biting finish at Taunton.

Once again, there were some outstanding performances on the Indian side. On the opening day, Salamuddin (6-64) and Baloo (4-48) bowled out Somerset for 157.

A chanceless century by the muscular Bajana, who had played on this ground before, enabled the Indians to take a lead of 39 runs. Somerset fared much better in their second innings, with Baloo for the first time proving ineffectual with the ball.

Set a target of 265, the Indians appeared 'doomed to defeat' on the final day when they lost their 6th wicket for 102. At this stage, Baloo walked out to join his brother Shivram.

The Palwankar siblings proceeded to put together a rollicking partnership of 116 in a little over an hour. 'They played delightful cricket, and hit powerfully on both sides of the wicket,' wrote one reporter.

When Baloo was dismissed after scoring an entertaining half-century, the visitors were 47 runs short of the target. Shafqat Hussain quickly followed Baloo back to the pavilion.

Bulsara then offered Shivram dogged support as the latter reached his century. But the portly Parsi departed with the Indians still 22 runs adrift.

Shivram and Syed Hasan now whittled away at the target amidst mounting tension.

With 1 run required to level the scores, Shivram edged a ball to the slips, but the catch was put down.

Fittingly, it was the Dalit batsman from Bombay who struck the winning runs. Praising the centurion, one newspaper noted that 'Shivram batted splendidly and fairly won the match for his side'. 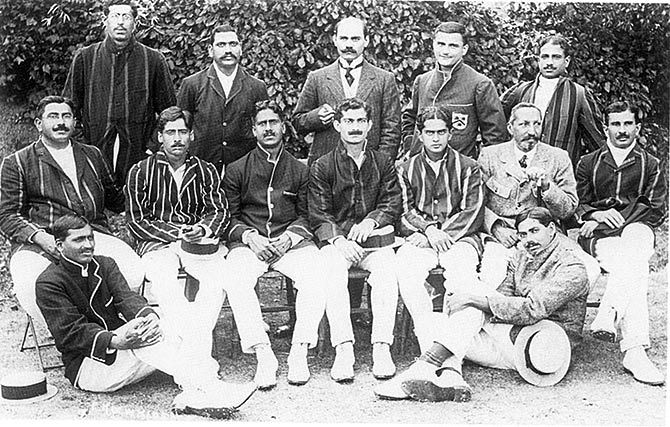 For the second time in a row, the Palwankars had carried the Indian team to victory.

Buoyed by their consecutive victories, the Indian cricketers inflicted crushing defeats on their next two opponents.

Representative cricket at Lincolnshire and Durham was deemed 'second class', and the Indians proved too strong for both counties.

'Since the turning point of the tour at Leicester the Indian team seems incapable of doing anything but win matches,' declared Sewell in his weekly report.

These decisive victories owed much to the strivings of Baloo, Shivram, and Salamuddin.

Against Lincolnshire at Sleaford, Shivram scored 175 and helped the Indians post a score of 463-6.

Salamuddin and Baloo easily got rid of the Lincolnshire batsmen both times in the match to leave the Indians winners by an innings.

Against Durham at Sunderland, Salamuddin scored 85 in the first innings and took 5 wickets in the second innings, as his team coasted to a 7-wicket victory.

'To the large majority of the British public, India was little more than a geographical expression,' Divecha declared.

Hence, the tour 'had done something to bring India more vividly before the eyes of the public there'. 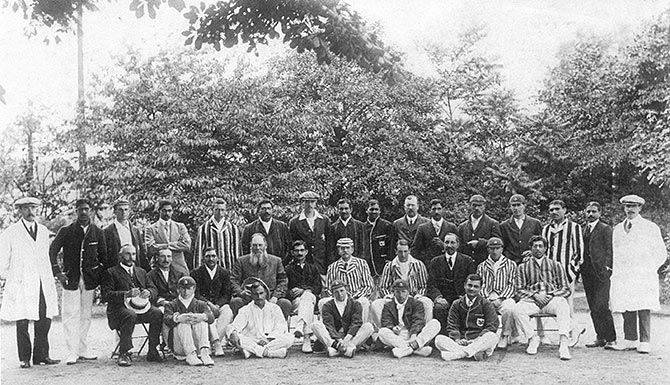 IMAGE: The All-India team with their hosts at the Kent county cricket club. Baloo Palwankar is seated next to the legendary W G Grace, the greatest cricketer of the Victorian age.

The Parsi manager was equally sanguine about the Indian team's performance in Britain.

He highlighted the adversities that the team had to confront over the course of their three-month sojourn in the imperial metropolis: The unhelpful schedule, the constant travel and play, the remarkable heat wave, the unfamiliar playing conditions, and the absence of their captain and best batsman for the better part of the tour.

In these circumstances, he told his interlocutors, the Indian team had acquitted itself 'fairly well and under more favourable conditions it could have beaten all of the weaker of the first-class counties as well as all the second-class counties'.

Baloo Palwankar, the hero of the hour, was notably more critical in his assessment of the Indian performance. The most successful bowler on the tour revealed to reporters, eager to record every word, that 'he did not look upon the result of the tour as satisfactory'.

Baloo offered a clear-eyed assessment of the reasons for the Indian team's disappointing showing.

The eldest Palwankar dwelt on the power dynamics that underpinned cricketing encounters between the colonisers and the colonized.

Thus, 'the bad arrangement of the programme' had been a major factor in the poor performance of the Indians at the outset of the tour.

It would have been 'much better', Baloo said, 'if the first big matches had been interspersed with a few second-class fixtures, so that at the beginning in place of the monotonous series of heart-rending reverses they could have had some successes to cheer then up'. 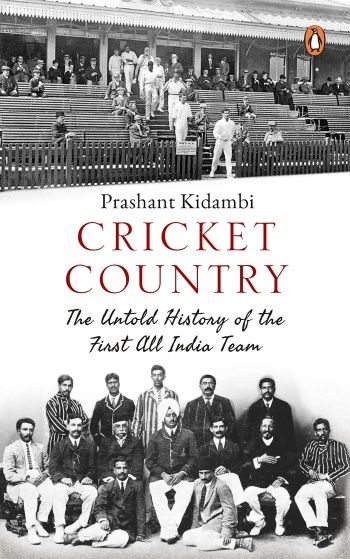 On the cricket pitch too, 'the Indian batsmen were quite at sea with the express deliveries of the English fast bowlers and equally so with the googlies'.

Baloo, noted one reporter, 'was modest about his own prowess with the ball'. Instead of dwelling on his extraordinary feats, he chose to praise his fellow bowlers.

It was left to Seshachari to acknowledge the contribution of his team-mate. Baloo, he told interviewers, 'had been man of the side' and the team 'could not have got on without him'.

Nor was the Tamilian wicket-keeper the only one to applaud the Dalit bowler. The remarkable feats of the Palwankar brothers had transformed them into public heroes.

The day after the Indian team's return to Bombay, a ceremony was held at the Hindu Gymkhana to honour the players who had represented the community.

Ironically, Baloo and Shivram, who were treated with disdain when they had set out for London, now received special tokens of honour 'in appreciation of their services to the team'.

Baloo was presented with a gold medal, while his brother received a silver cup.

The Palwankar brothers were also the guests of honour at a public ceremony organised by representatives of the so-called 'Depressed Classes' in Bombay.

Notably, the address on this occasion was presented by a young man named Bhimrao Ambedkar, future leader of the Dalit masses and the principal architect of independent India's Constitution.

Excerpted from Cricket Country: The Untold History Of The First All India Team by Prashant Kidambi, with the kind permission of the publishers, Penguin Random House India.