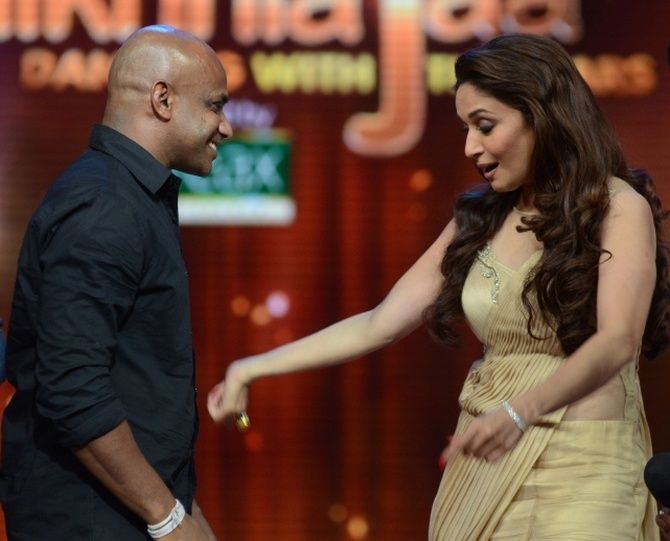 IMAGE: Sanath Jayasuriya with Madhuri Dixit on the dance floor.

It was hardly a surprise that when IPL announced fresh auctions for the 2011 edition, Sanath went unsold.

None of the other franchises, apart from Mumbai Indians, bid for him.

His waning form coupled with his age made him a complete no-go. But Sanath took the omission sportingly.

'I am not disappointed and have no complaints. I was associated with the team for three years and have good memories. They are a fantastic side and Sachin is leading the team brilliantly. I wish them good luck,' Sanath said to The Times of India.

He did, however, make a trip to his favourite city of Mumbai during the 2011 IPL, but to the studio of the host broadcaster, SET Max.

Interestingly, it was during this trip that Sanath gave an indication of what could be in store for him next in Mumbai

During one of the pregame show, Sanath, in a bid to show some support to the dipping fortunes of Adam Gilchrist-led Kings XI Punjab, announced that he would dance if they won.

Almost on cue, Gilchrist heard that and mentioned it in his celebratory post-match presentation interview.

Always a sport, Sanath kept his promise and did a small jig. 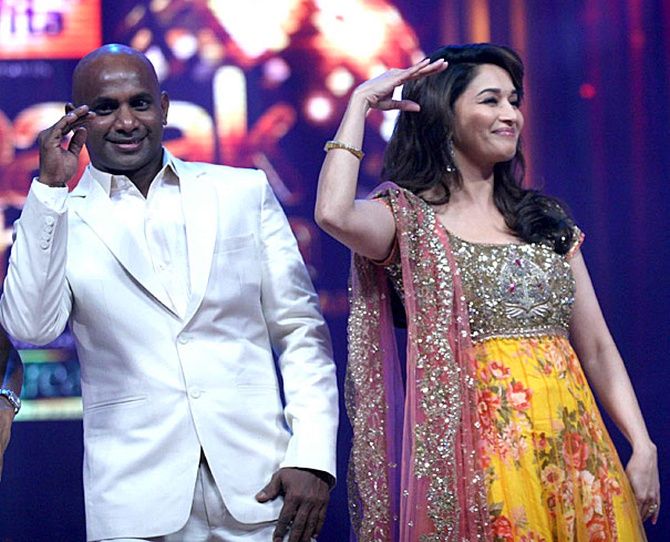 Little did he know that the jig would get him back to Mumbai a year later, not for cricket, but for a completely new ball game.

He was going to appear in the Indian version of Dancing With The Stars -- Jhalak Dikhhla Jaa.

This was going to be the 5th season of the reality show. It featured three very high profile judges.

Leading the pack was Bollywood's female superstar Madhuri Dixit, who was finding her way back into the tinsel town, leading film-maker Karan Johar, and top choreographer Remo D'Souza. Sanath was paired with a choreographer called Suchitra for the show.

The show usually features a celebrity from any walk of life and a choreographer who trains the contestant.

The contest has various challenges. Almost every week, a contestant is eliminated, leading to the grand finale.

'I have never been on a dance field. This is the first time I am doing something like this. But it's a good experience for me,' said Sanath at the launch of the show.

'First, I need to see what kind of dancing I will need to do because we have a culture, we have some kind of a system in our country. We are more conservative people,' he said, adding that his people viewed him as a cricketer.

'Now when I am involved with these things (dancing), they are looking at me differently. So I need to be very careful.'

At the age of 42, Sanath was required to groove to Bollywood, salsa, rumba, Latin, contemporary and hip-hop beats with his choreographer.

But he was not sure he could match the experts on the dance floor.

'We go out and dance at normal parties. But it's not anything close to the dance taught here. It's totally different. My legs can move on the cricketing field, not for these dance sequences,' he said.

The surprise that Sanath was part of the show was unveiled at a grand launch press conference held in Mumbai.

Sanath confirmed that his fears about dancing were indeed right when he hit the dance floor with Madhuri.

It was a sight to behold as Madhuri held the fort, while Sanath just stood there pointing a finger here and there.

He just could not match Madhuri's brilliance and decided that discretion was the better part of valour.

Nevertheless, he won cheers galore from the audience at the launch -- a response he hoped regular show viewers would also provide. 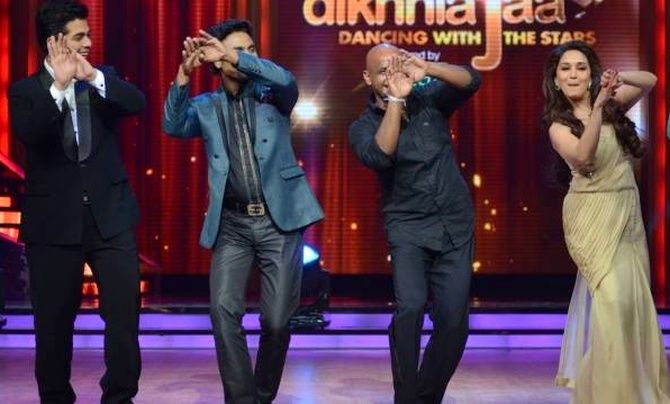 Up against Sanath in the show was a wide variety of contestants, especially a group of television and film actors.

Looking at the field he was up against, Sanath's decision surprised his friends, family and fans when the news of his participation spread.

'My contemporaries are surprised because I am a person of a different kind. And when I say yes to these things, they are a little surprised. They have mixed feelings. So some comments were good, some weren't good, and so I was a bit worried too,' he said.

'I am not nervous. I am just not a good dancer, and so it will take a little time to get into my system. I feel I am stepping into something which is not in my comfort zone. But as a human being, one should try new things. As long as it is not affecting my future career, I am fine with new things,' he added.

When the promo featuring Sanath was unveiled, it featured him in a dressing room receiving a gift from Madhuri.

He then breaks into a dance, which yet again confirmed his discomfiture with dancing, though he did sport a smile.

In the very first episode of the show, Indian off-spinner and Sanath's long-term adversary Harbhajan Singh came on to introduce him.

Harbhajan did the traditional bhangra to welcome Sanath and even pushed the Sri Lankan legend to dance with him.

Sanath for once seemed to be at ease because he had someone he knew accompanying him on the dance floor.

But when the show started, Sanath stunned everyone, especially the judges, with his performance.

The very first competitive performance for Sanath was right up his alley as it required him to be in cricketing whites.

The dance was based on a cricketing song, which required him to use a bat, helmet and just move.

This fitted very well with Sanath. The reactions of the three judges post the dance explained how he had left them amazed.

For Remo specifically, it was the case of a hero performing, albeit on a different field. Then, Madhuri started singing a famous Sinhalese song, Surangini, maali, surangini malu and she got Sanath to sing along.

Karan Johar, on the other hand, could not stop referring to him as 'sir' and hailed his spirit.

The three judges gave him a standing ovation and he could only react with a sheepish smile.

All three gave him 9 points each out of 10, leading him to poll 27 out of the available 30 points.

This was a shocking result and catapulted Sanath directly to the top three after the very first competitive performance!

In the second week of the show, themed as 'Dance Attack', Sanath surpassed all expectations yet again.

But this time, he was nowhere close to the top performer. He totalled 24 points, still a manageable performance for a cricket superstar.

Surprisingly, Sanath was not even close to being part of the eviction list.

Much like the first week of the competition, Sanath and Madhuri had a bit of Sinhala bonding. Sanath got Madhuri onto the stage and taught her the Sri Lankan dance form, Baila, which even got the other two judges interested.

For once, Sanath seemed at peace with himself as Madhuri attempted the Baila dance form on the hit Hindi song Twist from the movie Love Aaj Kal. It was in the third week that things went completely topsyturvy. This episode was on the theme of 'Zodiac Signs'.

Sanath was the lowest scorer in the episode. He polled just 19 votes from the judges and, as a result, was part of the eviction list along with Jayati.

Sanath was finally evicted after the fans voted him out.

Thus ended Sanath's stint as a dancer after just three weeks due to one weak performance.

The daily soap also aired on the same channel, Colors, as his dance reality show.

Sanath's role was brief as he appeared as himself. But his presence played a crucial part in taking the show forward.

The episode aired on June 27, 2012, Sanath is introduced by the show's main male protagonist, played by Kunal Karan Kapoor, to the kids of his love interest on the show, played by actress Akanksha Singh. This was almost meant to be a clincher because the son of the female lead dreamt of becoming a cricketer, and Kunal's character planned something big by taking the entire family to meet Sanath.

Incidentally, Sanath was shown as being on the sets of Jhalak Dikhhla Jaa when the entire crew of the daily soap came to meet him.

Sanath went back from his reality show experience completely amazed at the 'tough experience', but with happy memories.

'The show is completely different from what I do in life but I enjoyed it thoroughly. The contestants are talented and hard-working. The three wonderful judges (Madhuri, Karan and Remo) were really warm towards me, especially Madhuri,' Sanath told wire agency IANS in an interview from Sri Lanka.

'It was an amazing experience overall, but a tough one for me. I tried to put in a lot of hard work and enjoyed to the fullest. It was nice to learn a bit of salsa and jive. Before the show, I had never performed on a stage; am happy I could do so,' he added in that interview.

Excerpted from Sanath Jayasuriya: A Biography by Chandresh Narayan with the kind permission of the publishers, Rupa Publications.