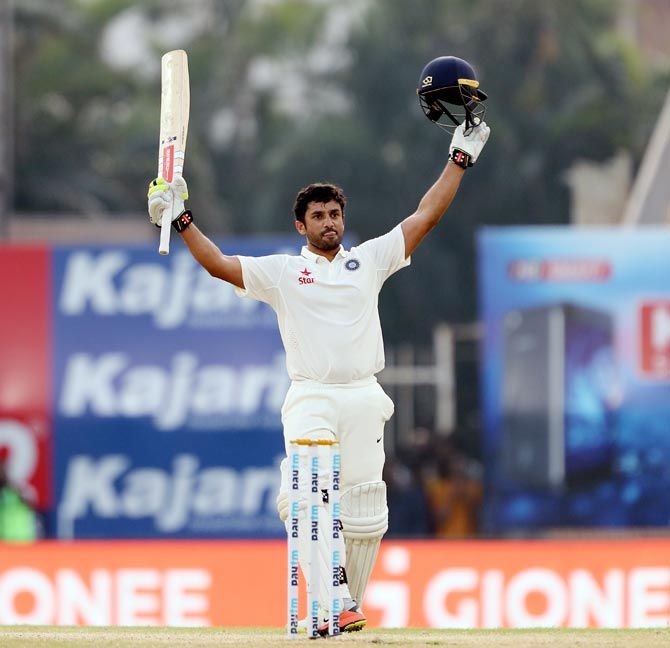 Only the second Indian to score a triple hundred in Test cricket.

Karun's 303 not out came in the fifth and final Test against England at Chennai.

The Karnataka batsman is a member of the Indian squad that is currently touring England, but hasn't been called up for the playing eleven yet, despite the failures of many of his team-mates.

So we asked Rajneesh Gupta -- cricket's Numbers Guru -- how many batsmen who have scored a triple ton have played fewer Tests than Karun after he made a triple Test hundred?

This is what Rajneesh tells us:

Sangakkara's triple hundred, Rajneesh points out, came only towards the end of his career, so it was not surprising that he did not play more than 12 Tests after that.

Similar was the case with Mark Taylor who scored a triple ton towards the fag end of his career and took retirement on his own terms.

Some of these players scored triple tons very late in their career and not playing many Tests after that was obvious, says Rajneesh.

Gayle, on the other hand, was not interested in playing Tests anymore for various reasons.

And that was Andy Sandham, the first man to score a triple hundred in Test cricket -- 325 against the West Indies at Kingston in the 1929-1930 series.

Sandham, who played 14 Tests for England between 1921 and 1930, never played Test cricket again after his historic feat.