Of the 10 times India have made a fourth innings chase under Kohli, they have won only 1 and lost 7, with 2 draws.
Rajneesh Gupta gives us all the numbers from a memorable game. 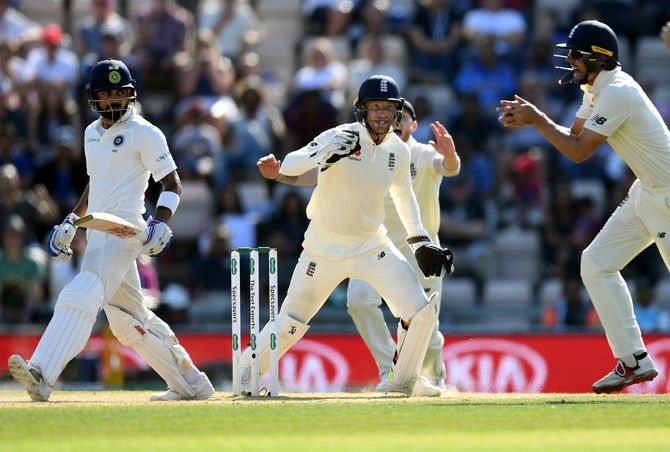 45 Number of consecutive Tests after which India played the unchanged XI from the previous Test.

This, however, is not an Indian record.

Between 1955 and 1964 India played 47 consecutive Tests without playing the same XI as the previous Test.

The Southampton Test was the first time that Captain Virat Kohli was playing the same XI as the previous Test.

Only one player has a longer streak than Kohli's 38-match streak from the captaincy debut.

Most Tests as captain before first unchanged XI

Graeme Smith's tally excludes one Test as the captain of the ICC World XI.

86 Number of Tests taken by Ishant Sharma to reach his 250 wickets. Only one player -- South Africa's Jacques Kallis -- has taken more matches (127) to reach this mark.
Incidentally, Ishant's 250th wicket was also his 50th wicket against England.

119 Number of innings taken by Virat Kohli to complete 6,000 runs in Tests -- the second fastest among the Indians after Sunil Gavaskar who needed 117 innings to accomplish this feat.

29 Rishabh Pant was dismissed for a duck in the first innings after batting for 29 balls, equalling the longest duck by an Indian in Tests on record.
Pant now shares this dubious distinction with Irfan Pathan and Suresh Raina who also recorded a 29-ball duck each.

Longest ducks by Indians in Tests

The following batsmen remained unbeaten on 0 after facing most balls:

271 Runs scored by Sam Curran in the series, all at number 8. The combined aggregate of Indian tailenders (from number 8 to number 11) is only 210.

65 Number of innings taken by Virat Kohli to reach 4,000 Test runs as captain, the fewest for any captain.
Virat is the first Indian captain in Tests to do so and tenth in all.
Not only is Virat the quickest to reach this landmark, he has also reached there with the higher average (66.66) and with more hundreds (16) than anyone else.

Fewest innings to 4,000 runs as captain in Tests

0 Number of Indian captains to aggregate 500 runs in Test series outside India before Virat Kohli.
Rahul Dravid with 496 runs in the series against the West Indies in 2006 held the previous record of most runs by an Indian captain in an away series.
At the end of this Test, Virat taken his aggregate to 544.

3 Number of times Virat Kohli has aggregated 500 runs in a series as captain, the most by an Indian.
He was earlier at level with Sunil Gavaskar with two such instances.

2 Number of times India had lost to England despite taking a first innings lead before this Test -- at Lord's in 1936 and at Nottingham in 2011.

10 Number of times India have made a fourth innings chase under Virat Kohli. They have won only one and lost seven, with two draws.
The only successful chase came against England at Mohali in 2016 when India chased down a target of 104 for the loss of two wickets.
Out of seven such chases outside India, they have lost six and drawn one.