'Good shot, yaar; but why are you batting so aggressively, almost angrily?' Amarnath wants to know.
'Jimmy pa, you don't know, he swore at me in Madras. I have been waiting for an opportunity to give it back!' Yashpal responds. 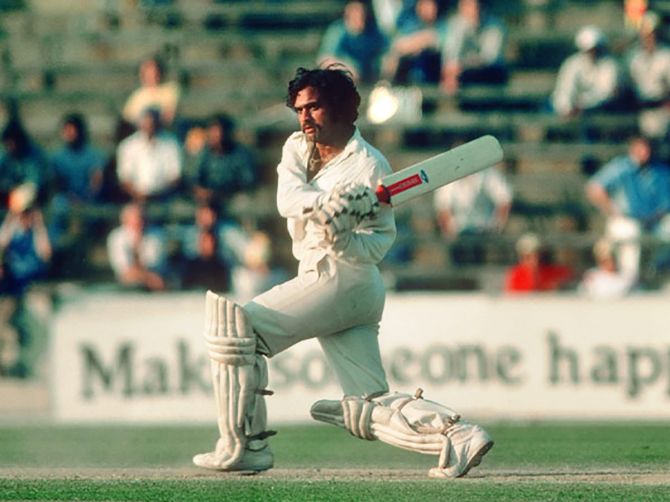 His untimely demise, at the age of 66, shocked India and legions of cricket fans across the world.

While many of his explosive innings will be remembered, it is his contribution to getting India to the 1983 World Cup that will never be forgotten.

The 22 yards at the Old Trafford stadium were waiting to decide which team would make it to the World Cup finals.

India, which was regrouping its team, faced a strong English opposition.

To Yashpal Sharma -- the hearty Punjabi who loved almonds -- that may not have been a factor. His job was to bat and he played a crucial role in getting India to the World Cup finals that made history.

A fascinating except from Miracle Men: The Greatest Underdog Story In Cricket by Nikhil Naz. 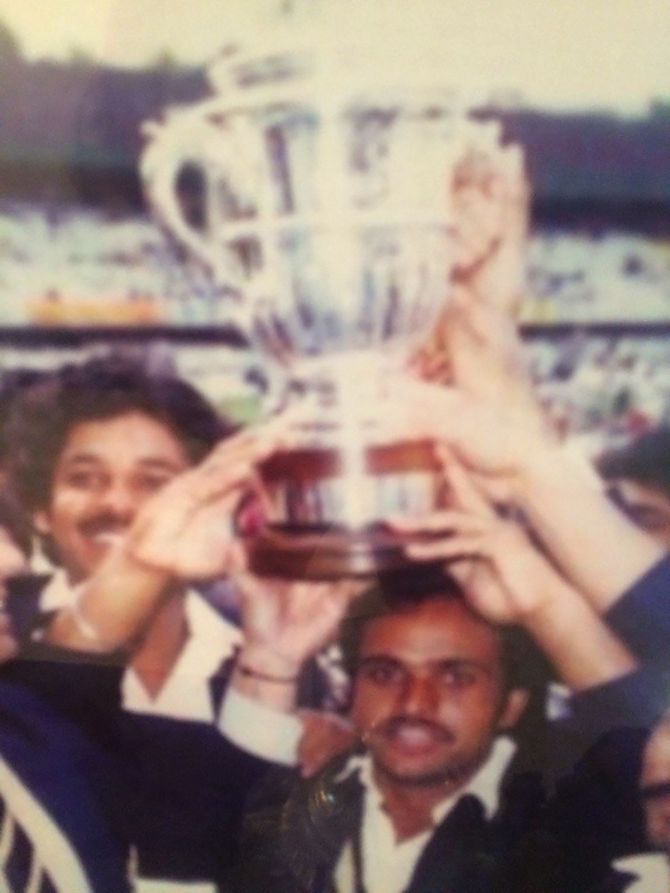 First over after lunch, (captain) Kapil (Dev) throws the ball to Kirti (Azad).

The bowler, not wearing his bowling spikes, knits his brow in confusion before giving his cap to the umpire.

The first ball is a poor one: down the leg-side. Mike Gatting bends down on his knees and gives it the treatment it deserves. Four down to fine leg. The perils of adopting a leg-stump line. Dead accurate, you can stifle runs; slightly wayward, it turns into a gift for the batsman.

Yashpal (Sharma) at short-fine leg has no chance of stopping it.

'Push the fine leg back,'screams restaurateur-turned-cricket expert Mintu Bhatia from the stands. Kapil can't hear him, or is choosing not to. Either way, Yashpal is staying put inside the 30-yard circle.

Same over, similar ball, Allan Lamb tries a similar shot. Only this time, the short-fine leg fielder stops the ball in its path, picks it up, and hits the stumps at the non-striker’s end. All in one motion. Allan Lamb is run-out. The badam-fed strong hands of Yashpal Sharma to the fore.

The English team is unhappy with 213. Yashpal is unhappier still. Someone has polished off the almonds from his plate. He brought them with him from the hotel, for refreshment during the innings break, since there wouldn’t be much on offer at the ground for a vegetarian like him.

It's third time lucky for (right arm fast-medium bowler Ian) Botham. This one (ball) has ballooned up. (Krishnamachari) Srikkanth's natural instincts getting the better of him. He has swung his bat fractionally early, allowing the ball to hit it a bit higher than intended.

(England's captain Bob) Willis is taking no chances. 'It's mine,' he screams, running from mid-off and completing the catch at mid-on.

Srikkanth is walking back to the pavilion, dragging his Slazenger bat along the turf. Visibly disappointed. India are two down for 50.

Make that three down.

Mike Gatting has knocked the stumps down at the non-striker;s end with Yashpal Sharma inches short.

It's the batsman's fault, attempting a suicidal run after the ball has gone straight into the hands of the mid-on fielder. But Yashpal is still in the middle.

It's the umpire’s fault. David Evans has failed to spot the run-out, despite being in the perfect position to do so. The English players are perplexed, the fans vexed.

(Vice captain Mohinder) Amarnath and Yashpal have taken a conscious call to be cautious. Extra cautious. 'No wicket should fall now; doesn't matter if we don’t get runs,' is Amarnath’s standing instruction. 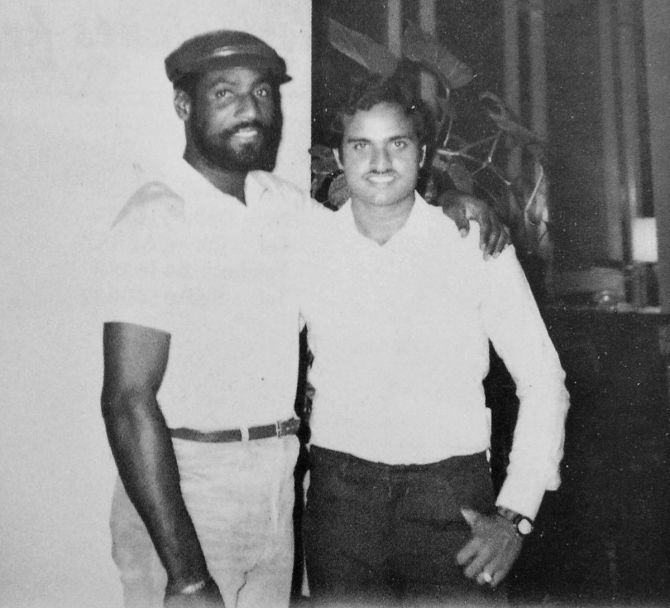 The tension in the Indian dressing room is palpable.

Kirti, Patil and Kapil are sitting on the balcony. Pads on legs, hands in gloves trepidation writ large on their faces.

(Sunil) Gavaskar is sitting a few steps behind. Kapil can't sit still any longer; he gets up and starts pacing around the dressing room.

'Who do you think should go next?' Kapil wants Gavaskar's help.

'Don't panic, all three of you have the ability to up the tempo. Whoever goes, will score.'

Kapil sits back down on his chair..

Yashpal and Amarnath walk into a dead-silent dressing room. The usual chatter is missing. There are no customary pats on the backs from their teammates. No one has bothered to offer them tea either.

The not-out batsmen can sense the tension in the air.

Spotting Man Singh sitting in a corner, sipping tea, Amarnath gesticulates to him to come over. 'Is our scoring rate the cause of worry?' he asks, softly. The manager responds with a set smile on his face.

Amarnath has his answer.

He reciprocates with a broad smile of his own. 'Don't worry, we know what we are doing; just stay calm and relax,' says Amarnath, before taking the last sip from his tea cup, wearing his gloves and heading back on to the field.

The 44-year-old cricket administrator can instantly feel an abatement in his anxiety levels, leading to an increase in his appetite levels. Another cup of tea and an extra piece of cake are had.

True to his words, the first over after tea, Amarnath steps down the track. And collects a four.

'There is no point in both of us taking a risk. I'll go after the bowling, you stay put,' are the vice captain's instructions when the two batsmen meet in the centre of the pitch for a chat.

'Let's have faith in them, guys. If these two stay till the end, we will win,' the experienced Gavaskar has a word of advice for the tense Indian camp.

A couple of steps down the pitch. Leaving the stumps exposed, daring the bowler to hit them. A flat-batted swipe. Off Paul Allott. The ball sailing over the long-off fence. It's a six.

It's Yashpal. Hitting the ball with disdain.

The vice captain is taken aback. 'Listen to me, Yash, just chill a bit; we don't want to lose a wicket.' The hot-blooded Punjabi nods in agreement.

Yashpal has been shuffling across his stumps repeatedly. The bowler has spotted the pronounced movement at the crease. He's now trying to bowl a middle-stump line. Inswingers at that. The idea is to have the batsman dismissed LBW.

Yashpal grins. The line has been cast. He's been working on it for the last four years. Trying it out in the nets. And today, Willis has fallen for it, hook, line and sinker.

Next ball. Willis, running in. Yashpal has his eyes fixed on him. But his mind is elsewhere. 1979 to be precise. The West Indies versus England in a World Cup final.

Viv Richards moves across his stumps, picks up Mike Hendricks's delivery from outside the off-stump, and sends it across to the squareleg boundary for a maximum. Yashpal, sitting in the stands, watches the ball drop -- along with his jaw -- right in front of him.

The cheer from the crowd has brought him back to his senses.

He looks around. The ball is being retrieved from the deep square-leg boundary. The umpire has both his arms up in the air. Bob Willis stands 10 yards in front of him.

Yashpal is standing at one end of the batting strip. The off-stump right behind him. The scorer is adding six runs to Yashpal's individual score. 'Sublime shot!' yells the commentator. He doesn't know it was subliminal.

Amarnath doesn't know what to make of it. He enjoyed the audacious shot, but isn't too pleased with Yashpal's cavalier approach.

'Good shot, yaar; but why are you batting so aggressively, almost angrily?' the senior pro wants to know.

'Jimmy pa, you don't know, he swore at me in Madras. I have been waiting for an opportunity to give it back!' 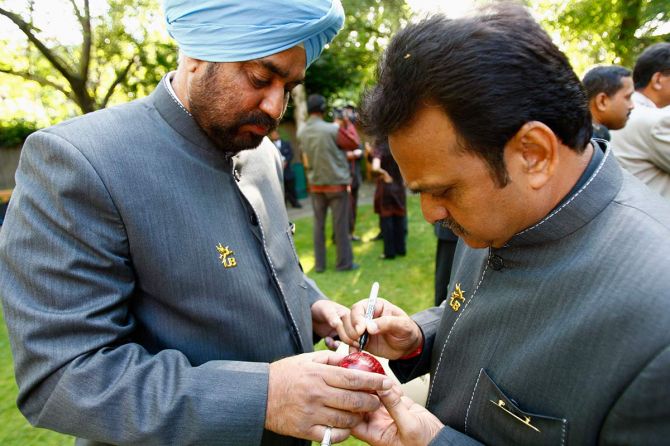 IMAGE: Balwinder Sandhu of India's 1983 World Cup winning cricket side holds his original match ball for team mate Yashpal Sharma to sign on June 25, 2008. They were at the Lord's cricket ground to celebrate the 25th anniversary of their victory. Photograph: Andrew Winning/Reuters

Eighteen months ago: Yashpal Sharma reaches a plucky half-century on day two of the Madras =Test between India and England. Rather than appreciate his batting, Ian Botham and Bob Willis use profanity to describe the landmark.

The temperamental Yashpal is seething. He is on the verge of using his bat for something other than just smacking balls.

His partner at the other end, the ice-cool Gundappa Viswanath, comes to the rescue with his pearls of wisdom. 'Just score a 100 and then not you, but the English media will sledge them back, you watch.'

Yashpal obliges, brings up his second Test century, before the end of the day's play.

The largely ignored Indians in England are feeling boisterous today. They sense a major upset in the cards.

'Angrezon ko sabak sikhana hai -- We have to teach the English a lesson' chants can be heard emanating from the stands, drowning the chorus of an improvised version of God Save The Queen -- featuring words like 'no surrender', borrowed from a xenophobic song of the same name -- being sung by the English supporters.

Yashpal and Amarnath are marching on...

He has lost his partner Amarnath in the process -- run-out for 46.

Sandeep Patil joins him in the middle. 'You please stay till the end, I will take the risks,' is what the dashing stroke maker from Bombay tells Yashpal.

Sandeep Patil looks in the mood. Similar to what he was in exactly a year ago, on this very ground, against the very same bowler: Six consecutive fours in a seven-ball over was what Willis was subjected to by Patil on that occasion.

It's (Paul) Allott's turn now. A quick, short ball is nonchalantly dispatched to the square-leg boundary. Courtesy a textbook pull. 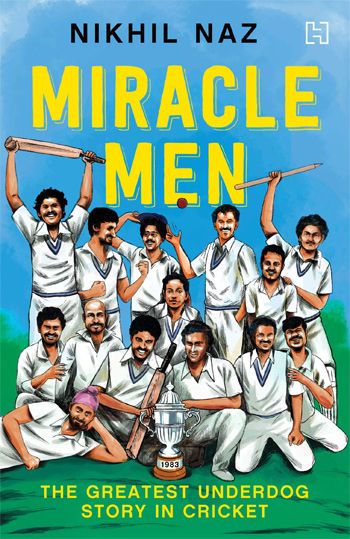 But not all shots from Patil this afternoon are following the coaching manuals. Some are being labelled 'outlandish'. India's 200 is up on the scoreboard. Patil on 36, at the end of the 52nd over.

Man Singh, in his blue shirt and tie, is enjoying the action sitting in the player's balcony.

Syed Kirmani is next to him, chewing his nails out of habit, not nervousness.

Kapil is standing by with his pads on. 'India are sailing home' is the latest pronouncement from the commentators.

Kapil is now walking out to bat. Yashpal is walking off to a standing ovation. Out for 61. Allott taking a stunning catch at the third-man boundary.

Too little too late for England, perhaps? Kapil certainly thinks so.

This edited excerpt from Miracle Men: The Greatest Underdog Story In Cricket by Nikhil Naz, has been used with the kind permission of the publishers, Hachette India. 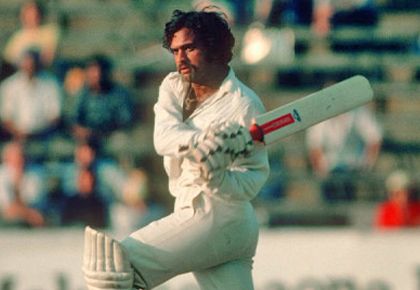