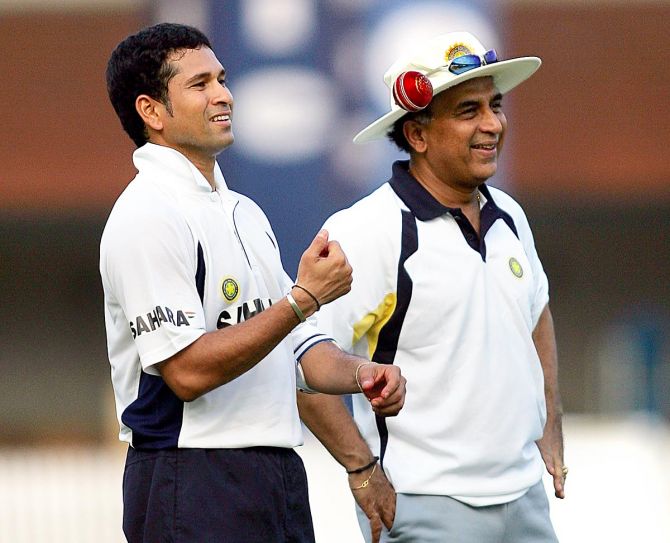 This feature was first posted on Rediff.com in July 1999.

Many years ago -- actually, so many years ago that I hesitate to put a date to it for fear of appearing dated myself -- I had acquired a pass for the Moin-ud-Daulah tournament; a reflection of the fact that my father knew the people that mattered in Hyderabad.

And you don't get more important than being someone who can give a 'pavilion pass' to a star-struck boy.

I had to share it, grudgingly at first and happily later, with my cousin Shrikant.

He was luckier than I was for on 'his' day, he contrived to get lost at the Lal Bahadur Stadium and when he finally emerged through a door, he found himself in front of Sunil Gavaskar.

He thrust his right hand out and smiled (for years thereafter I complained that he had the more innocent smile!) and received a smile and a right hand in return.

I was jealous of him for years.

I had to wait another fourteen years before I could shake hands with him.

I have often wondered what it was about Gavaskar that caused a generation to be so awe-struck.

There was very little television (we had to smile at a friend's father every evening to be able to see the highlights of the 1979 tour of England).

And not everyone had access to the beautiful pictures that K N Prabhu could paint with words.

Perhaps it was the radio broadcasts (will AIR never feel even a twinge of shame at what it puts out today?) of people like Dicky Rutnagar and Anant Setalvad and Raj Singh that created the image.

Perhaps it was a British accent raving over something Indian -- for then, like now, we did not believe in the value of what we had unless it was approved by someone with a different accent.

To all of us who had to live with the thought that being Indian meant being inferior, and who dreamt of the day that would change, Gavaskar was the torch-bearer.

Suddenly, an Indian could score as many runs as anyone else, could face fast bowling as well as anyone else (and in course of time, better than the others) and didn't regard two great knocks as sufficient to find himself a place in Indian history.

Those were wonderful days of self-discovery.

Through school and through early days in college, the transistor was our best friend.

Invariably it was switched off when Gavaskar got out.

Often, we took it to bed and it was there that we heard Suresh Saraiya announce India's Test win at Auckland in 1976 (of course, Gavaskar scored a century! And he was captain! And he handled Prasanna brilliantly!).

It was there too that the dulcet tones of Anant Setalvad (another person I always wanted to be like!) announced the start of another century against Jeff Thomson and Wayne Clark.

Those three second innings centuries took away valuable hours from my ISC preparation and had it not been for Sunny's relatively smaller contributions in the first innings (which, of course, led to the transistor being switched off!), I would have struggled to do even as well as I did.

But the quality was awful and I still believe that had the thought of producing a good telecast even briefly figured in Doordarshan's plans, Gavaskar would have been a far bigger hero.

For we remembered his shots even though we had to wait till India travelled abroad to see them.

His shotmaking on that 1979 tour was awesome, and I remember thinking then, as I do now, how much of that was denied to us because the highlights were all we could see.

He had his Duncan Fearnley on that tour; the same one with which he scored so many runs in Pakistan in 1978 and in the flood of Test matches that followed immediately after that.

It had holes drilled onto its playing surface (six if I remember) and I remember being convinced by the argument that it facilitated the flow of air and in doing so, helped his driving.

And so Duncan Fearnley was the best bat in the world.

And Gray-Nicolls was the worst because Gavaskar switched to it on the 1981 tour of Australia and didn't score as many runs as we would have liked him to.

I remember contemplating writing a letter to him asking him to switch back to the Duncan Fearnley.

The one with holes drilled into it.

Then, of course, he moved to the SG bats and nobody could convince us that it stood for Sanspareils Greenlands.

To us, it was a clumsy effort at meaning Sunil Gavaskar and saying somethig else! That great innings of 96 at Bangalore came with his Sunny Tonny.

If only Channel 9 or the TWI/ESPN Star combine could have produced that! Luckily for us, the BBC did a great job of filming his 188 at Lords (strangely with a Morrant sticker on the bat!) during the MCC Bicentennial.

Again it was the BBC World Service that brought us the radio broadcast but we got to see the highlights and I will never forget an astonishing assault on Clive Rice.

A couple of years later, I stood transfixed in one of Calcutta's metro stations watching it again on the television sets they had placed there.

His square driving was awesome and it was like we were watching the Palmolive commercial come alive (when I had to buy my own shaving cream, and couldn't pinch my father's any more, it had to be almolive!).

Gavaskar had that effect on us.

But we saw so little of Gavaskar, and that is why we remember specific shots, specific moments.

He had, of course, other contributions to make as well.

If Indian cricketers are very well paid today, it is because he fought for better remuneration, though he might permit himself a chuckle as he recalls his biggest advertising pay-day.

But nothing can quite match the impact he made on a generation -- and in doing so, he ensured that cricket stayed in very good health for another twentyfive years.

He was a pioneer in much the same way Kapil Dev was to be a few years later.

One showed us that Indians could play fast bowling, the other showed us we could actually bowl it.

A couple of years ago, I asked him how he handled crowds, how he could still spend a long time signing autographs.

"The greatest joy this game has given me", he said, "is to be able to touch people's lives. And an autograph or a shake of the hand is all they sometimes want."

He is right. He didn't know, he probably still doesn't, that I would have given anything to have been in my cousin's place so many years ago in Hyderabad.