IMAGE: Mahendra Singh Dhoni's pyrotechnics with the bat made him a fan favourite. Photograph: Kamal Kishore/Reuters

Mahendra Singh Dhoni will always be remembered as the one who had a great role in taking Indian cricket to the next level.

His calm approach to captaincy and his amazing finishing skills with the bat changed the entire dynamics of batting in limited overs cricket as India emerged as potent force in ODIs and T20s.

Dhoni's pyrotechnics with the bat made him a fan favourite and he achieved stardom when he led a young India to the World T20 title in 2007.

A few years later, Dhoni did the double when he guided India to the ODI World Cup title in 2011, while also captaining the team to the ICC Champions Trophy two years later. The knock is more famously known for the six that India won the World Cup!

This was perhaps one of the most important knocks of Dhoni’s career. The captain took the responsibility upon himself to guide India to victory in a high-pressure World Cup final against Sri Lanka in the 2011 World Cup in Mumbai.

Chasing a stiff 275 for victory, the match was evenly balanced at 114/3 in the 22nd over when Dhoni took the decision to promote himself ahead of the in-form Yuvraj Singh at No 5 to counter the threat of the Sri Lankan off-spinners.

Gautam Gambhir had rallied India after the early fall of openers with a brilliant 97, but it was Dhoni, who played the knock that mattered.

The skipper ensured that India stayed in control in the middle overs, with a cracking innings of 91 from 79 balls, to take India to a 6 wicket win with 10 balls to spare, finishing off it in grand style with that six! This was the innings that announced his arrival on the big stage.

After an indifferent start in his first four ODI innings, Dhoni made it count when he was promoted to No 3 in the second ODI against Pakistan in Visakhapatnam.

He then dominated the 149-run stand for the fourth wicket with Rahul Dravid (50) to put India on course for a huge total.

The Pakistani spinners bore the brunt of Dhoni's attack as he smashed a magnificent 148 from 123 balls, hitting 15 fours and four sixes. Six months later, Dhoni again set the stage on fire. This time it was Sri Lanka's turn to face the music.

Chasing a stiff 299 for victory, India were rocked by Tendulkar's early dismissal as Dhoni was again promoted to No 3.

He produced another masterclass in attacking batting as he tore apart the Sri Lankan bowling attack.

Dhoni rallied India along with Sehwag (39) before building another partnership with Captain Dravid.

The Jharkhand wicket-keeper with the long locks became the toast of the nation as he hammered 183 not out from 145 balls, having hit 15 fours and 10 sixes to take India to an easy 6 wicket victory, with 23 balls remaining. 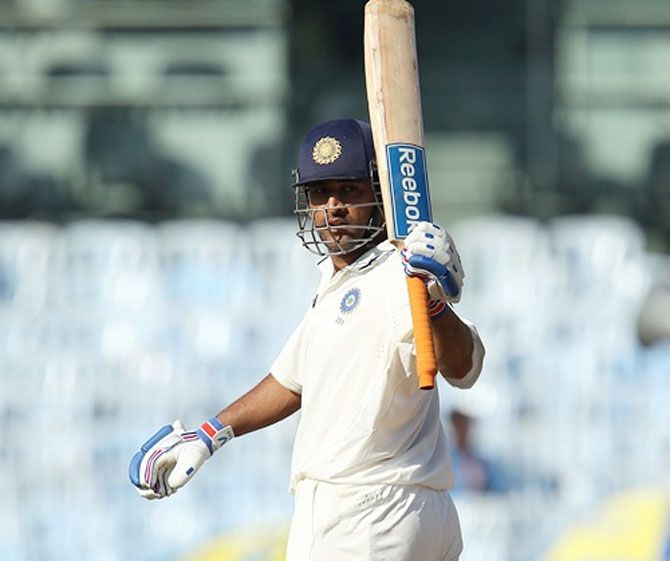 Dhoni stamped his class with his maiden double century in Test cricket.

Australia had scored a healthy 380 after electing to bat first on a wicket helping the spinners before India looked in some strife at 196/4.

Dhoni's arrival changed the complexion of the game completely.

He took the attack to Australia putting on a brisk stand of 128 runs for the fifth wicket with Virat Kohli, who made 107.

After Kohli's dismissal, Dhoni single-handedly took on the Australian bowlers with the tailenders giving him good support.

He changed gears after reaching 150, taking just 46 balls to complete the next fifty to complete his maiden double hundred from 231 balls. IMAGE: Mahendra Singh Dhoni hits out during the ODI against Australia in Mohali, October 19, 2013. Photograph: BCCI

India were reeling at 76/4 after being put into bat before Captain Dhoni set about the repair job in Kohli's company.

The duo put on 72 runs for the fifth wicket before Kohli was dismissed for 68, leaving Dhoni with only the tailenders for company.

He got much-needed support from Ravichandran Ashwin (28) as the duo added 76 runs for the 7th wicket.

After Ashwin's dismissal, Dhoni then took majority of the strike and scored some quick runs at the end as he helped India cross the 300 run mark.

The India captain finished unbeaten on a splendid 139, hitting 12 fours and five sixes in his 121 ball knock.

It was only the blinder from James Faulkner (64 from 29 balls) that helped Australia clinch victory from the jaws of defeat.