'What we are about to watch in Australia is a mid-table contest -- 3rd versus 5th in the ICC Test championship table.'
'Both teams seem full of flaws.' 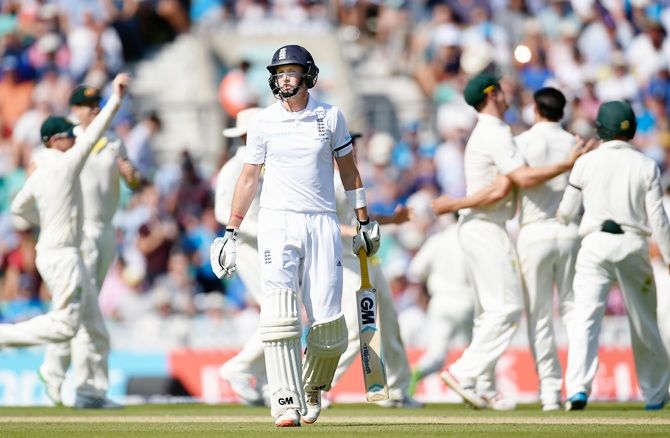 IMAGES: Joe Root walks off after being dismissed, caught Mitchell Starc off Mitchell Johnson's bowling, for 11.
This was the final Test in the last Ashes series at The Oval, August 22, 2015.
Australia won the game by an innings and 46 runs, but lost the series 3-2.
Root, now England's captain, will be eager to erase memories of the 2013 Ashes series in Australia which the Aussies won 5-0.
Photograph: Stu Forster/Getty Images

The Ashes -- cricket's oldest rivalry -- gets underway at the Gabba in Brisbane on Thursday, November 23.

David Warner, Australia's pugnacious opener, set the tone for the series early on -- even before the tourists had boarded their flight at Heathrow -- when he spoke of the contest as war.

Both sides seem equally confident of victory in the five Test encounter.

England seized the Ashes two years when they outpointed the Aussies 3-2 at home.

Two years earlier, in 2013-2014, the Englishmen had been pulverised when they traveled to Australia, losing the series 5-0.

'Australia like to hit the opposition hard early and we have been talking about going hard ourselves,' Englad's coach Trevor Bayliss told the media after his wards drew their last warm-up game against a Cricket Australia side over the weekend.

'We are not here to make up the numbers. We are here to win,' Bayliss declared.

The Gabba is where the Aussies like to begin their Ashes campaign.

It is the ground where they are most invincible -- not having lost a Test since November 1988.

The last time the two sides played at the Gabba, almost four years to the day in 2013, Australia beat England by 381 runs.

Set to score an improbable 561 runs for victory, Alistair Cook's side was decimated by Mitchell Johnson (5/42).

So how does Gideon Haigh see Ashes 2017 playing out?

Haigh -- an Aussie who is widely considered the finest cricket writer around -- has an unusual take on the contest. A MUST WATCH video!

The third of a multi-series video conversations on cricket.