Rajneesh Gupta lists some amazing coincidences in cricket -- a feature guaranteed to amuse you in these anxious times.

England played Australia at Perth in 1979/80

Playing in that match for England were Peter Willey and Graham Dilley, while Australia included their star bowler Dennis Lillee.

'What would be the chance of these three being involved in one dismissal?' joked the commentators before the match.

By a freakish coincidence (the odds must have been more than 100:1 against), Dilley found himself bowling to Lillee, who edged the ball to gully where it was caught by Willey.

Result: The oddest sounding dismissal of all time: Lillee c. Willey b. Dilley 19

Though, much of the credit for this win should go to the bowlers, the V V S Laxman-Zaheer Khan stand of 70 runs for the eighth wicket in third innings of the match proved to be the very crucial.

On all three occasions, India won the match by a margin of 153 runs. 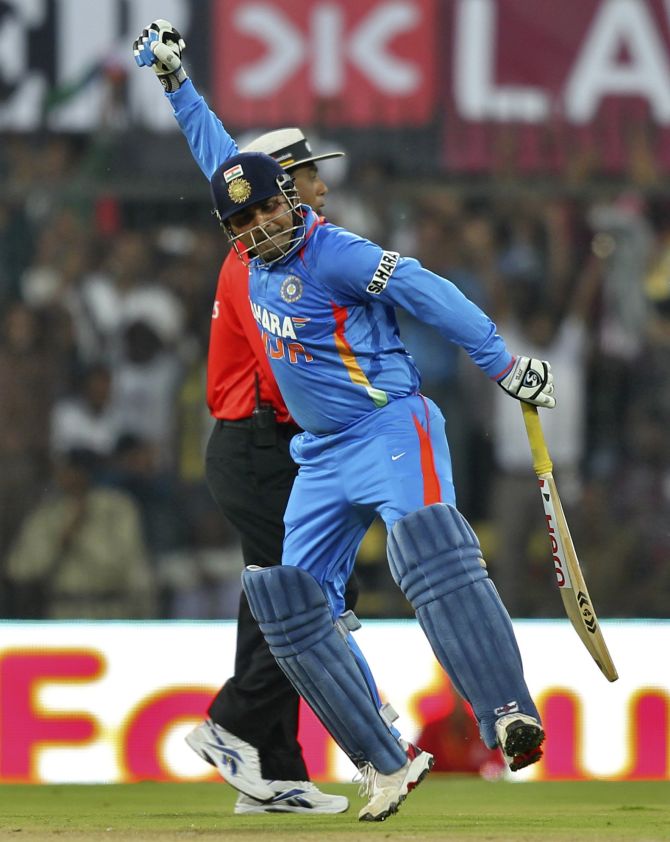 South Africa's Mark Boucher retired from international cricket in 2012, one wicket-keeping dismissal shy of the magic number of 1,000.

Of his 999 dismissals behind the stumps, 555 came in Tests and 444 in one-day and Twenty20 internationals.

After the first 12 Tests, the West Indies's Darren Bravo had the identical figures as his much-celebrated cousin Brian Lara at the same time.

The first-ever Test was played between Australia and England at the MCG in 1877.

100 years later, marking the centenary of Test cricket, a special match was played again between Australia and England again at the MCG.

During the Adelaide Test against England in 1990/91, four of Australia's top six batsmen were dismissed in identical fashion in both innings.

He scored the same number of runs, wickets and catches in both Test and one-day international cricket.

When Sri Lanka hosted Zimbabwe in 2001/02, the tourists were dismissed for the same total in all three Tests.

In the opening match at Colombo, the Zimbabweans were bowled out for 236 after following-on.

The South Africa-Australia Cape Town Test of 2011/12 has been described as one of the most drama-packed and statistically-significant encounters of all time.

The second day of the match saw both sides bundled out for less than 100 with a total of 23 wickets taken.

The third day was also memorable.

England's Tony Greig took 4/53 in the second innings of his debut Test against Australia in 1972.

Incidentally, his brother Ian Greig had the same figures of 4/53 in the first innings of his debut Test against Pakistan in 1982.

Bangladesh fast bowler Abul Hasan had a fairytale start with the bat as he scored 113 on Test debut against the West Indies in Khulna in November 2012 batting at number 10.

The debutant then went on to concede exactly the same runs with the ball as he had scored with the bat without picking a wicket.

In the 1978 first-class season, former England cricketer David Steele scored 1,182 runs in 31 completed innings and finished with an average 38.12.

His younger brother John also scored exactly 1,182 runs in 31 completed innings, to finish at an average of 38.12.

In 1924, England beat South Africa in the first two Test matches at Edgbaston and Lord's.

On each occasion the margin was an innings and 18 runs, and in each match South Africa's top scorer was Bob Catterall with 120.

In 1961 when Australia faced England at Old Trafford, both sides batted for the same length in the Test -- 235.2 overs.

Remarkably, both sides faced a unique set of overs in both the innings:

Playing at the MCG against the West Indies in 1968/69, Ian Chappell had the distinction of scoring the 1,000th century in the Test cricket.

His 165 just happened to be the same score as that achieved by Charles Bannerman when he made the first-ever Test century, also at the MCG in 1877.

Australia's Arthur Richardson finished the 1924/25 Test series against England with the identical batting and bowling average of 31.00.

In eight innings he made 248 runs and with the ball took eight wickets for 248.

Nasser Hussain and Alec Stewart both made England debuts in the same Test, against the West Indies at Kingston in 1989/90.

Both were caught off the bowling of Ian Bishop for 13, both faced 12 balls and hit three fours.

In the third Test at Melbourne in 1977/78 India's Bhagwat Chandrasekhar returned the identical figures in each innings with both bat and ball: 0 & 0 and 6/52 and 6/52.

In 1956, Jim Laker famously took 19 of the 20 possible wickets against the Australians at Old Trafford.

The other wicket was taken by Tony Lock, meaning all 20 wickets were taken by bowlers with surnames beginning with an 'L'.

A more unlikely coincidence came in 1983 when New Zealand beat England at Headingley.

At the time, Richard Hadlee was near the peak of his bowling powers, but the 20 England wickets were all shared by Coney, Chatfield and Cairns -- an all 'C' combination.

After being dismissed for 100 by Sri Lanka in the first innings at Galle in 2012, Pakistan scored 300 in the second innings.

It was for the first time in the history that a team had been bowled out twice in the same Test for a round-figure total.

In 2000 for the first time in Test history two players and that too of the same country appeared for their 100th Test in the same Test match.

This is what happened when Alec Stewart and Mike Atherton stepped out at Old Trafford to play the third Test against the West Indies.

That their 100th Test coincided with the queen mother's 100th birthday and that the venue was the home ground of one of these two (Atherton) was a remarkable coincidence.

To add to all this was the fact that by scoring a century, the next day Alec Stewart became only the fourth cricketer to score a century in his 100th Test.

India's Kris Srikkanth, who played in 43 Tests and 146 one-day internationals, finished his career with an identical highest score in both forms of the game.

In Test cricket he made two hundreds, the highest of which was 123 against Pakistan in 1986/87.

The highest of his four one-day international centuries was also 123, also against Pakistan in the same season.