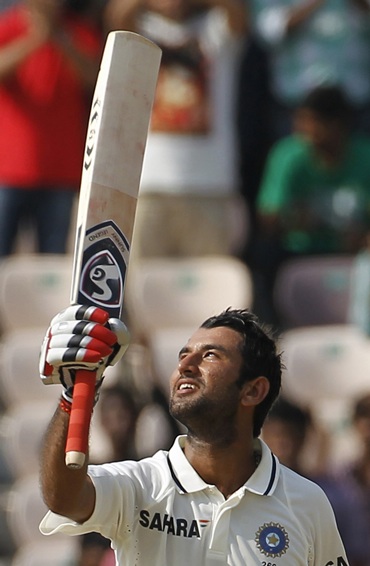 The city of Rajkot is basking in the glory of its illustrious son Cheteshwar Pujara's maiden Test hundred.

Not only is his family, but a number of cricket enthusiasts are also delighted by the laurels he has brought to Rajkot with the brilliant century on the opening day of the first Test between India and New Zealand in Hyderabad on Thursday.

As Cheteshwar completed his century, there were celebrations at many places in the industrial city of Gujarat. Firecrackers were lit, sweets distributed and cricket lovers danced in groups to the tune of musical instruments.

"We had been waiting for this moment for a long time. He has brought such a rare honour for all of us and we must celebrate this proud moment," said Satyadev Hirani, a young computer wizard and cricket nut.

'It was a flawless innings' 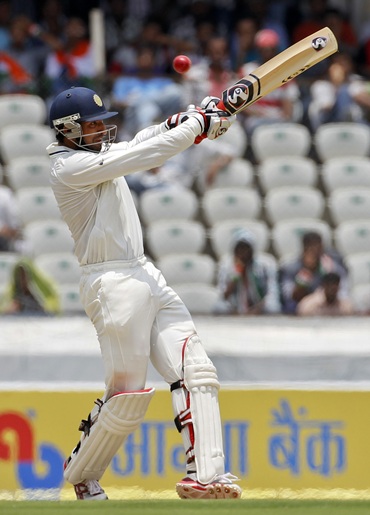 "I'm humbly proud of Chintu. He played really well today and proved his ability and class. Even before the start of the Test he was under a lot of pressure because people were comparing him with Rahul Dravid and expecting him to take his place.

"His captain, too, showed confidence in him and sent him at one-drop, where Dravid usually used to bat," a visibly ecstatic Arvind Pujara told Rediff.com about his prodigiously gifted son at his home in Rajkot.

"More than the century, it's the manner and the circumstances in which he made his runs that is important, I think. It was a flawless innings and he played each delivery on its merit.

"What I liked the most about Chintu's game was that he was willing to play his shots, as usual, and didn't slow down even when approaching his hundred," his father added.

'Chintu has already made all of us proud' 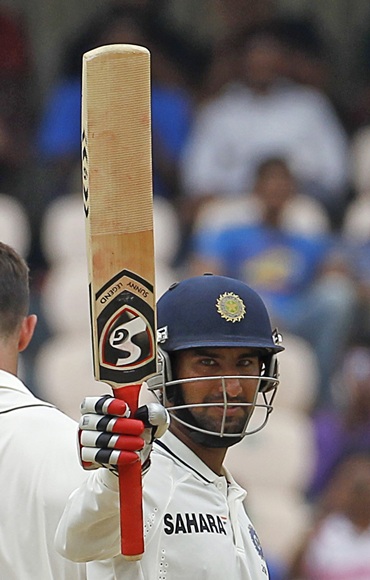 Image: India's Cheteshwar Pujara raises his bat to celebrate scoring a half century during the first day of their first Test match
Photographs: Vivek Prakash/Reuters

A former Saurashtra player, Arvind further said: "His mother, who died of cancer in October 2005, always wanted him to play for India. It was her dream that Chintu played for India and scored a Test century. I'm so happy that he has realised her both dreams now. I must say that even in her death she is a constant source of inspiration for Chintu.

"I know how determined he was to stage a successful comeback after being out of Team India for so long because of injury.

"Though he did not have a good Ranji Trophy season by his own high-scoring standard, he justified the national selectors' confidence in his ability and did quite well in the West Indies both as batsman and captain of India A," said Cheteshwar's uncle Bipin Pujara, also a former Saurashtra player who toured the West Indies with India's Under-19 team in the 1980s as a wicketkeeper-batsman.

"Chintu has already made all of us proud by being the first Saurashtra player in many years to play Test cricket. Now that he has scored a Test hundred, we're doubly proud of him and his achievements. He showed a lot of maturity while playing the way he did today. His chanceless innings was marked with passion, patience and perseverance." 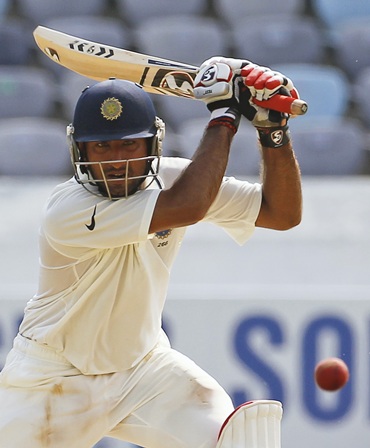 Has Cheteshwar filled the gap left by Dravid?

"No way. It's just not possible for anyone to fill the void left by someone like Dravid.

"Chintu has just started playing Test cricket. He has a long way to go and so much to prove still. But, yes, I'll be naturally very happy if he continues to bat like this and one day makes all of us feel that he has indeed replaced Dravid in a true manner," said Bipin Pujara.

"Cheteshwar has always been a very special batsman. We knew very early that he had the makings of a true Test batsman. So neither his Test debut two years ago nor his century now is really surprising. All this was on the expected lines.

"Yes, it would have been shocking if he had not played for India. This is just the beginning and I'm sure he'll bring many laurels to the country in the coming years," said Niranjan Shah, Saurashtra Cricket Association secretary, who was also the BCCI secretary for two terms.