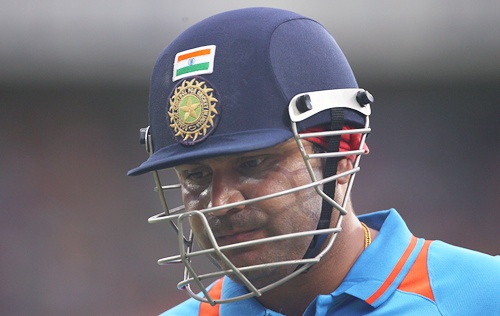 The Indian team's way of handling senior opener Virender Sehwag and the player's own attitude in this ongoing World Twenty20 is certain to raise questions whether all is well in the Indian camp.

-Don't criticise 5-bowler theory on basis of one failure: Dhoni

On the eve of the high-voltage match against arch rivalsPakistan, Sehwag was again seen skipping the entire net session although he did participate in a football game.

While skipper Mahendra Singh Dhoni and Virat Kohli also did not bat during the hour and half net session having played Friday's match, it was inexplicable to watch Sehwag relax and enjoy a chit-chat with other team members when serious questions are being raised about his form and commitment in the shortest format.

During the afternoon training session, the Indians enjoyed their game of soccer for close to 75 minutes -- a lengthier session by their standards.

Sehwag was goalkeeper of one team and played the entire duration.

Won't be surprised if Sehwag walks alongside Gambhir 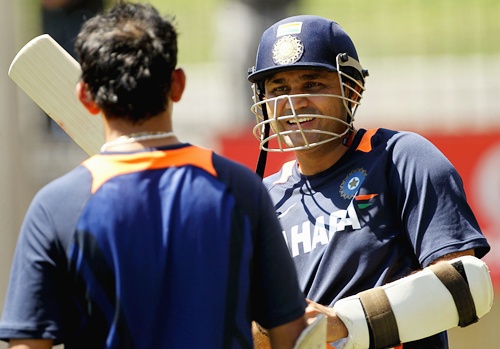 Finally, when the net session started, it was again Irfan Pathan who was all padded up and had the first hit in one of the two nets.

The fact that Pathan, who scored 31 off 30 balls against Australia, batted first in the batting session is seen as an indication that he may again open against Pakistan.

Skipper Dhoni has always had a penchant of bowling 'wrong one' to Indian media and it won't be a surprise if Sehwag walks alongside Gautam Gambhir against Pakistan as Irfan Pathan's technique was not good enough for handling a crafty bowler like Umar Gul.

However one expected Sehwag to have a decent hit at the nets when likes of Yuvraj Singh, Suresh Raina and Gambhir all looked serious during the session.

Lot depends on Sehwag to change the current script 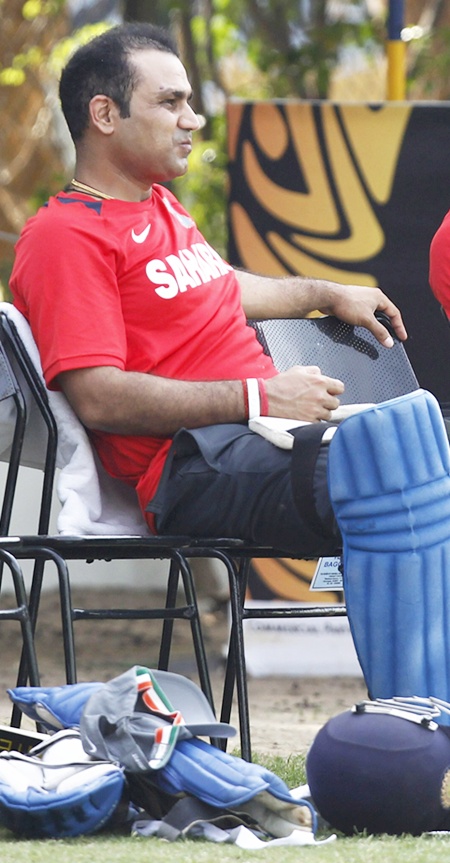 Sehwag was seen present in a melee chatting in a relaxed manner with Dhoni and Kohli.

While Dhoni and Kohli had a reason not to bat, Sehwag, if he is fit (as claimed by team management) had no reason not to bat at all.World T20's over the years have not been a happy experience for the 'Nawab of Najafgarh'.

Even during India's victorious campaign in the 2007 edition, Sehwag missed the final giving Yusuf Pathan a chance to make his international debut.

During 2009 edition in England, there was a huge controversy as to whether the opener had carried an injury into the tournament which led to skipper Dhoni marching in with the entire team to read out a press statement.

In the 2010 edition in West Indies, Sehwag missed the entire tournament with an injury as India went in with Murali Vijay.

The 2012 edition is also turning out to be an unhappy one for him and it only depends on Sehwag to change the current script.

Tags: Kohli , Murali Vijay , India , T20 , West Indies
More
© Copyright 2022 PTI. All rights reserved. Republication or redistribution of PTI content, including by framing or similar means, is expressly prohibited without the prior written consent.
Write a
Comment
Print this
article