Sign in  |  Create a Rediffmail account
Rediff.com  » Cricket » WC T20 warm-up: India on look out for ascendance against Pakistan

WC T20 warm-up: India on look out for ascendance against Pakistan 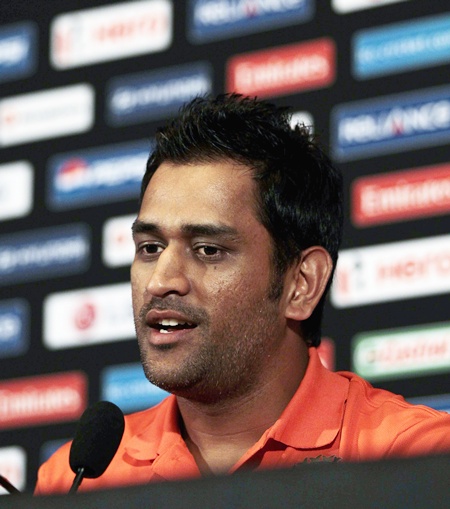 Their tails up after an easy outing against hosts Sri Lanka, India would like to keep the winning momentum going when they take on arch-rivals Pakistan in their second warm-up game in Colombo on Monday ahead of the ICC World Twenty20 beginning on September 18.

The Mahendra Singh Dhoni-led Indian team would, however, want their batsman to come good against a superior Pakistani bowling unit to maintain a clean slate ahead of their World Twenty20 opener against Afghanistan on September 19.

Though, India won comfortably against the hosts in their opening warm-up game, they certainly need to put up a better show with the bat against Pakistan, who boast of quality bowlers like Saeed Ajmal and Umar Gul in their ranks.

Injury to opener Gautam Gambhir, who hurt his wrist against Sri Lanka, would be a concern for the Indians but Virender Sehwag along with other top-order batsmen need to redeem themselves against Pakistan following their dismal show with the bat in the first match.

India, in particular, would like Sehwag to fire against Pakistan and get some runs under his belt ahead of the tough battle ahead.

Kohli has been a consistent performer 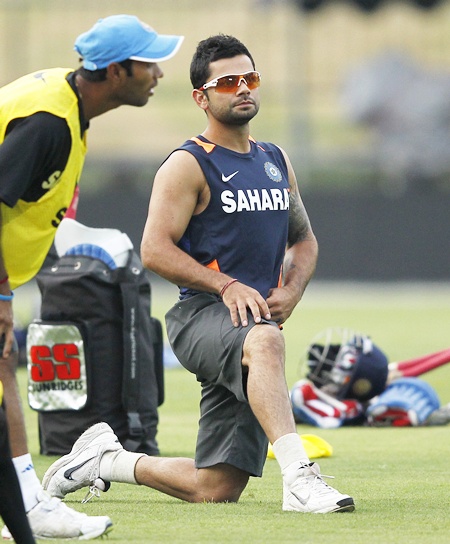 Virat Kohli, on the other hand, has been a consistent performer, but the young Delhi lad would look to settle down and get battle ready with a solid knock against Pakistan at the R Premadasa Stadium.

Yuvraj Singh, who made a comeback to world cricket after recovering from cancer with a cameo of 34 runs against New Zealand in the second T20 game in Chennai, also needs to get some more runs under his belt.

And the match against Pakistan will provide the gutsy left-hander with an opportunity to prove that he is ready and looking forward to take on the world with the same zeal as he had left it a year ago following the critical illness.

While Suresh Raina would also look to spend some more time on the crease, Dhoni showed why he is still rated as one of the great finishers of the game against Sri Lanka the other day.

But against Pakistan on Monday, the Indian skipper needs to be much more focused both with the bat and with his leadership skills.

Of late, Rohit Sharma has been erratic with bat which might prompt Dhoni to give Manoj Tiwary a chance ahead of their campaign opener. 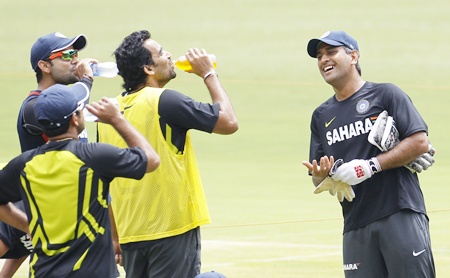 The Indian bowlers led by Irfan Pathan, however, looked in good stead in the previous match and they just need to continue their positive run against Pakistan.

Pathan continued his fine run and scalped five wickets to guide India to a comfortable 26-run victory over Sri Lanka in the first practice match on Saturday.

The only concern for Dhoni would be lack of wickets in pace spearhead Zaheer Khan's kitty.But comeback man Harbhajan Singh looked composed against the hosts and bowled a tight line, which definitely is encouraging for the team.

Pakistan, on the other hand have been a bit inconsistent in the run-up to the sporting extravaganza. They won two successive T20 matches against Australia, but their 94-run loss to the Kangaroos in the final T20 tie showed that their batsmen are vulnerable to quality bowling.

Pakistan has the necessary fire power to upset any side 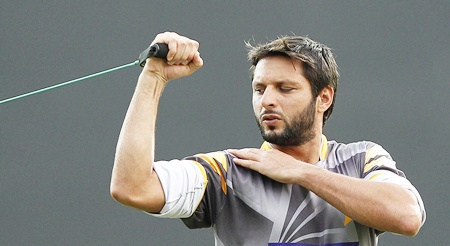 Pakistan's batting line-up exhibits immaturity at this level, but with the likes of Abdul Razzaq, Shahid Afridi and skipper Mohammed Hafiz in the ranks they really have the necessary fire power to upset any side.

Young Nasir Jamshed has shown tremendous promise with the bat and the game against India would certainly test his temperament.

On the bowling front, Pakistan has a much settled line-up with off-spinner Saeed Ajmal and speedster Umar Gul leading their respective departments.

The experience of Razzaq and Afridi with the ball gives Hafiz plenty of options to dismantle any batting side.

With both the teams having tasted success at the big stage -- India winning the inaugural World T20 in 2007 and Pakistan lifting the trophy two years later -- an exciting battle awaits cricket loving fans of both the countries.