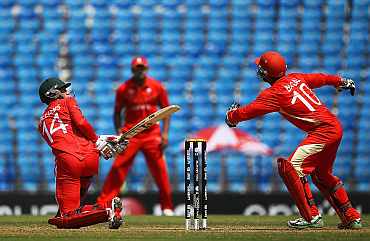 The ICC's decision to trim the number of contestants at the World Cup to ten, says M P Anil Kumar, is like a line commentators often spew forth: Brilliant shot, but straight to the fielder.

The piercing drone of the vuvuzela horns became the soundtrack of the 2010 football World Cup. Though there is an insect by name cricket that can drive people batty with its grating sound, the ongoing cricket World Cup has not been blighted by an aural nuisance like the vuvuzela.

That is if one disregarded the screechy theme song De Ghuma Ke. After A R Rahman, it's the turn of Shankar, Ehsaan and Loy to compose another dud of a theme song. No, I do not have a tin ear for Shankar-Ehsaan-Loy; I feel De Ghuma Ke can give an ear ache to those with soft tympanum! Play Waka Waka, any day.

Cricket's quadrennial do, to the shrill beats of De Ghuma Ke, has finally chugged on to the home straight. Of the 42 league encounters, only nine had us on the edge of our seat.

One could easily blame the presence of four associate teams plus Zimbabwe for the surfeit of lacklustre contests.

Prevent the 50 over game from going extinct 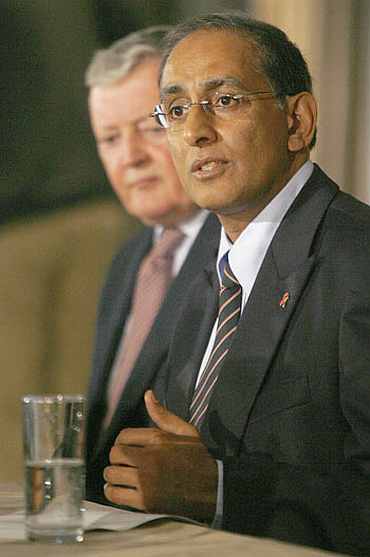 Last month, Haroon Lorgat, the CEO of the International Cricket Council, confirmed a cap of 10 teams for the next edition of the World Cup to be hosted by Australia and New Zealand in 2015.

It implied only the ten full status countries would participate, the associates would watch the action from base.

Justifying the decision, he said, 'The 50 over format is more skill-based and suitable for the top teams.' He added, 'We have felt in the past few years that Twenty20 is the best format to develop the game worldwide and it provides a better environment for competition.'

With the popularity of Twenty20 on the ascendant, with the 'insightful' commentariat forewarning the demise of the 50 over game (reminds one of Mark Twain's retort: 'The reports of my death have been greatly exaggerated'), it's apparent that this ICC decision is an effort to forestall the prophesied extinction of the one-day game. Why not?

There's enough space (and market) for all the three formats to co-exist without threatening the other. 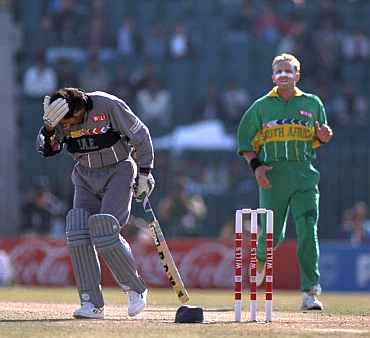 Does this mean shutting out David-slays-Goliath headlines?

The shepherd boy David first felled Goliath by slinging a brook-stone onto the giant's forehead, then unsheathed the prone, motionless giant's sword and decapitated Goliath, and King Saul did the rest to vanquish the Philistines.

Let me recollect a David-versus-Goliath face-off with a twist. Sultan Zarawani, the skipper of the United Arab Emirates, who earned brief fame for dismissing Sachin Tendulkar in the 1994 Australasia Cup, took guard as the number eight batsman, (foolhardily) wearing a sun hat.

Mind you, he was up against the tearaway Allan Donald in the 1996 Cup match at Rawalpindi. Predictably, Donald fired a bouncer, which struck Zarawani's brow.

Unlike the Bible, in a brief reversal of the David-Goliath exchange, Zarawani waved off the helmet, readjusted the sun hat and stood his ground un-intimidated.

He lasted six more balls, but won the hearts of cricket fans.

Minnows more than capable of creating an upset 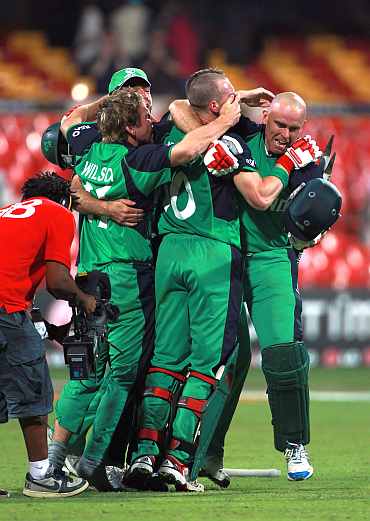 The annals of the cricket World Cup too have chronicles of David downing Goliath.

Sri Lanka drew first blood by spread-eagling India at Manchester in 1979. Zimbabwe emulated the feat four years later by prevailing over Australia at Nottingham. Zimbabwe was at it again, this time Eddo Brandes tripping England at Albury in 1992.

At Pune, in 1996, Kenya turned giant-killer by humbling the West Indies and entered the lore. In 1999, Bangladesh overran Pakistan at Northampton and Zimbabwe pipped India at the post at Leicester. A combo of fortuitous events and upsets vaulted Kenya to the semi-final in 2003.

In 2007, Bangladesh sent India packing, and Ireland scripted the mother of all fairytales by upturning Pakistan and Bangladesh, and tying with Zimbabwe. In the ongoing edition, Bangladesh did unto England exactly what the Irish did to the English!

This time, of the two lesser teams, Bangladesh was overrated; Zimbabwe was listless, and therefore moot whether they deserve to be reinstated into Tests.

Of the four associates, the Dutch flattered to deceive (would a dash of Dutch courage been inspiriting?), Canada and Kenya never looked the part. Besides the two victories, the Irish, despite the underdog tag, competed terrier-like in every other match.

And the Irish captain William Porterfield was very impressive, and to me, he's the skipper of the tournament. In fact, I would stick my neck out and affirm aloud that Ireland looks a better team than both Zimbabwe and Bangladesh when they were gifted Test status in 1992 and 2000 respectively. Sauce for the goose must be sauce for the gander.

Why not elevate Ireland to Test status? Or, has the ICC foreclosed further Test status by delimiting the next Cup to 10 teams? 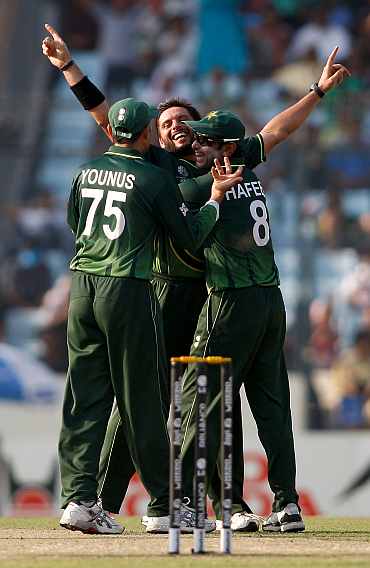 Even though I have a soft corner for the 'minnows', I strongly believe that they have it in them only to topple a complacent biggie or two, and there inflict mortification on them, but are incapable of challenging the world order. Yet, the ICC precluding an associate team like Ireland from 2015 was unfortunate.

FIFA -- the world body of football with 207 member associations -- can afford to organise a World Cup with 32 teams, but the ICC cannot enjoy a similar luxury of packing the Cup with lesser teams.

While the idea of a World Cup being a platform to promote the lesser teams is unexceptionable, I believe it is more important for the World Cup to be the acme of finest skills and fiercest contests (and also a treat for the viewers through absorbing telecast and riveting commentary).

Worst advertisement for the ODI format is a boring game 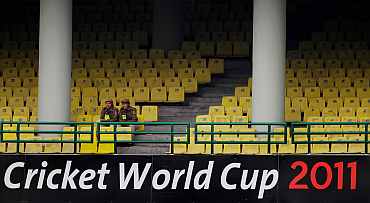 Hence I welcome the ICC's bold decision to trim the number of contestants to ten. However, I feel Lorgat's decision is like a line commentators often spew forth: Brilliant shot, but straight to the fielder!

The full status teams get automatic entry to the competition, which I believe is not a good thing. They must work their passage to reach there.

It precludes countries like Ireland to ply their wares and to take a shot at the big fellows.

In the ongoing Cup, of the 42 league matches, the Big Eight played each other only in 12 fixtures, the rest 30 featured at least one minnow.

As I observed above, one could count just nine matches that went down to the wire. The lesser teams were involved in three of these primarily because of a jaded English team (which seemed to be blessed with more lives than a cat).

The ICC should remember that the worst advertisement for one-day format is a boring game or a lopsided match, that too in a World Cup. To increase the probability of level, red-hot contests, why not grasp the nettle tighter and further reduce the teams for the 2015 World Cup to eight?

ICC should have qualifying tournaments 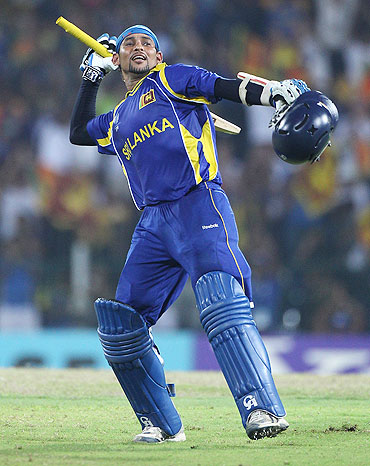 In hockey, a certain number of teams book places automatically for the world cup and the rest have to come through a qualification tournament. For 2015:
The top three teams qualify for the World Cup.

This process will compel the full status teams to take ICC ranking seriously (else they will have to sweat it out to qualify), and ensure a fair crack of the whip for the associates.

Replace the Champions Trophy with the qualification tournament.

Like in the 1992 World Cup, let the first stage be a round robin tournament -- each team plays against the other seven. So we'll have 28 league matches followed the semi-finals and the final.

Apart from greatly increasing the probability of even, cliff-hanging contests, the tournament will be over in a month flat, thus saving the yawns.

The ICC apparently does not lose sleep over the yawns, for, more teams mean more matches, more matches mean more money. Forget the ICC, any takers for my eight-team World Cup proposal?