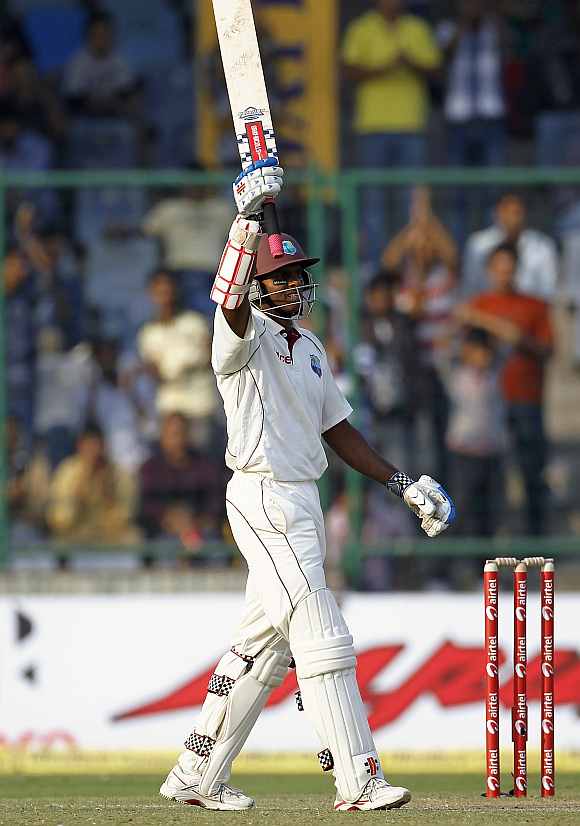 Shivnarine Chanderpaul brought all his experience into play as he notched up an unbeaten 111 to steer West Indies to 256 for five and share the honours with India on day one of the first Test in New Delhi on Sunday.

At stumps on the first day of the three-match Test series, wicketkeeper-batsman Carlton Baugh was giving Chanderpaul company on 19 off 45 deliveries. The duo have so far added 56 runs for the sixth wicket in 13.4 overs.

Opting to bat, West Indies' innings revolved around Chanderpaul's unbeaten knock, for which he faced 167 deliveries and spent 236 minutes on a Ferozshah Kotla track where Indian spinners Pragyan Ojha and debutant Ravichandran Aswhin threatened to run through the visiting side's top-order.

India's new spin-twins shared the five wickets between them. Ojha finished with creditable figures of three for 58 in 29 overs while Ashwin had two for 79 in 25. 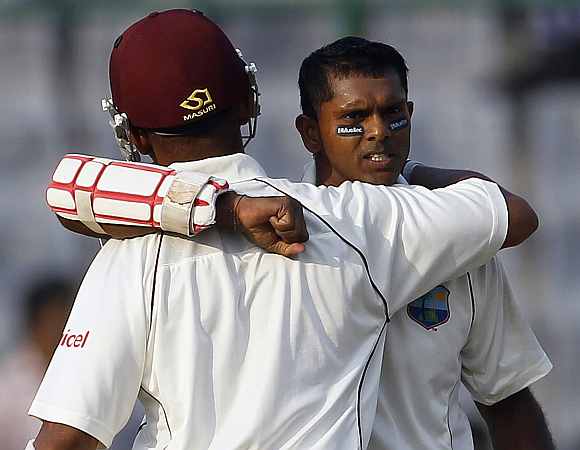 It was Chanderpaul's seventh Test century against India and 24th overall. Only Garfield Sobers and Vivian Richards (both 8 centuries each) have scored more centuries against India.

In West Indies' last tour of this country way back in 2002, Chanderpaul, one of the only two members from the current squad along with Marlon Samuels to feature in that series, had smashed a staggering three centuries in four Test matches.

That the 38-year-old left-hander's special liking for the Indian attack could be gauged from the fact that he has scored nearly 2000 runs with seven centuries and 10 fifties.

And, at a staggering average of over 70.Chanderpaul got to the century when he swept Ojha behind square for a single in the 83rd over. He had faced 144 balls and spent 195 minutes to reach the landmark.

Chanderpaul found an able ally in opener Kraigg Brathwaite, with whom he added 108 runs for the fourth wicket to frustrate the Indian bowlers, especially in the session before tea. 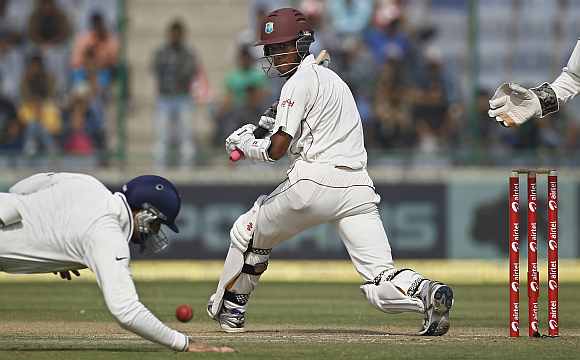 Brathwaite struck 63 off 212 balls before India skipper Mahendra Singh Dhoni pulled off a smart stumping off Ojha to bring an end to his hard-fought innings.

The 18-year-old Brathwaite's dogged resistance, during which he found the fence four times, was very crucial from the West Indies' point of view as Ojha and Ashwin were beginning to pose problems for the batsmen.

After Ojha's double blow in the first session, which saw him remove opener Kieran Powell and Kirk Edwards, Ashwin bowled Darren Bravo right after the lunch break to put the visitors under pressure.But Brathwaite, along with Chanderpaul, stitched together a handy 87-partnership for the fourth wicket to steady the West Indian ship.

Even as Brathwaite got his runs with nudges and steers through the third-man region, Chanderpaul looked intent on attacking the bowlers, especially the spinners, against whom he was not afraid to go down the wicket. 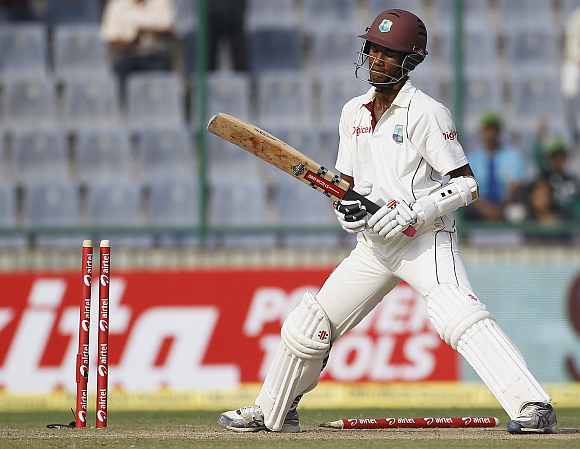 After the tea break, he meted out a similar treatment to Ojha who was hoicked over the long-on boundary. Brathwaite, meanwhile, got to his fifty, his second in this form of the game, with a push to mid-on.

Chanderpaul followed suit soon after, to bring up his 57th half-century in Tests.

The tide, however, seemed to have tide in India's favour in the post-lunch session when Ojha and Ashwin both got a wicket apiece, of Brathwaite and Samuels respectively, who was done in by the Dhoni-Ashwin combo, which gave the skipper his 200th dismissal, the first Indian glovesman to achieve such a feat.

Ojha strikes in the morning session 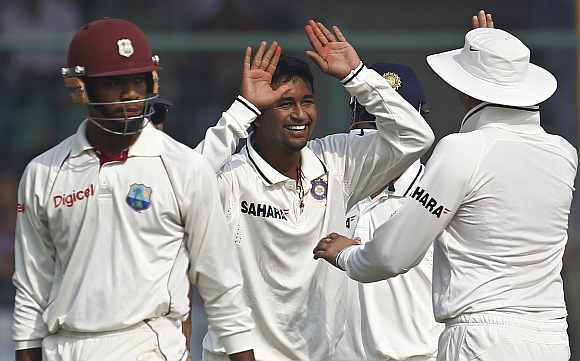 Earlier, in the first session, Ojha had struck twice as India enjoyed the upper hand leaving the visitors at 69 for two at lunch.

After Sammy had won the toss, left-arm spinner Ojha, playing Test cricket after almost a year since New Zealand's tour of India, had Powell trapped in front with big turning delivery in his second over, and the innings' 12th.

Ojha then had Edwards, on a high after slamming a century and a fifty in his last Test, against Bangladesh, caught and bowled with a one that stopped at the batsman.

The right-hander pressed forward, looking for the drive but was a touch early into the shot.The spinner, in the process, made amends for dropping a sitter off his own bowling, the batsmen being Powell, in his first over, with the scoreboard reading 25 for no loss.