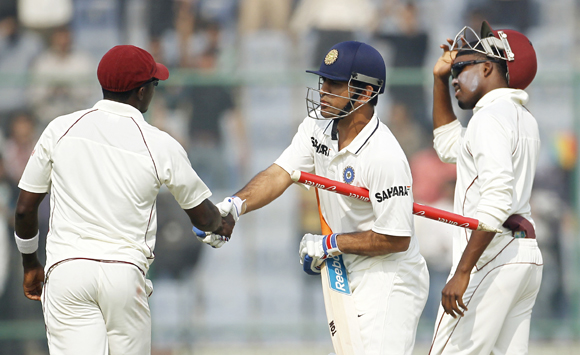 Sachin Tendulkar's quest for a record 100th international ton continued, but India rode on his fluent 76 to script an admirable come-from-behind five-wicket victory over the West Indies with more than four sessions to spare, at the Ferozshah Kotla on Wednesday.

Chasing 276 for victory, VVS Laxman (58 not out) and skipper Mahendra Singh Dhoni (0) were at the crease when India successfully completed the chase to take a 1-0 lead in the three-match series, on the fourth day of the match.

This was the second-best chase on Indian soil, equalling the one by the West Indies, incidentally at this very ground in 1987, when Vivian Richards stroked his way to a century to guide his team to victory.

The highest remains the 387 for four India, scored against England in Chennai in 2008-09.

India can pip South Africa to second position in the ICC Test rankings if they win the ongoing series against the West Indies 3-0, and if Graeme Smith's side loses the upcoming two-Test rubber against Australia. 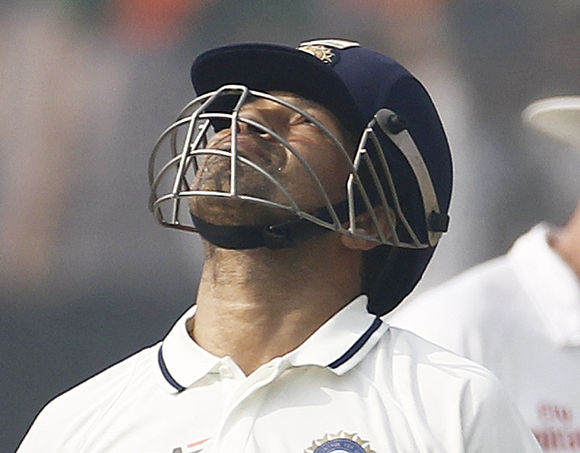 Starting at his overnight score of 33, Tendulkar looked set to achieve the incredible feat of scoring his 100th international century till Devendra Bishoo spoilt his plan with a well-disguised googly, leaving over 10,000 spectators at the Kotla stadium stunned.

The champion batsman faced 148 deliveries and spent 201 minutes, 93 of them today, during his stay at the crease. His knock was studded with 10 sweetly-timed hits to the fence.

India were just 43 runs away from achieving a hard-fought come-from-behind victory when Tendulkar made his way back to the dressing room, much to the disappointment of the crowd.

Edwards gave the West Indies a glimmer of hope 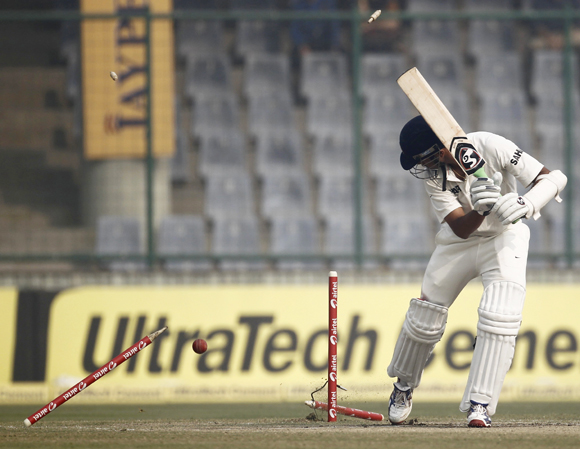 Resuming at 152 for two, and needing another 124 runs to win with eight wickets in hand, India lost Rahul Dravid (31) early on the fourth day.

Edwards gave the West Indies a glimmer of hope when he breached through the defence of Dravid with the one that jagged in a long way on landing.

However, Tendulkar was in his elements from the word go.

Another half-century in the fourth innings by VVS 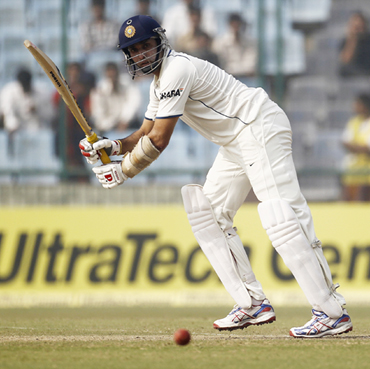 VVS Laxman stood firm to guide the Indians with yet another half-century in the fourth innings of a match.

His 58 not out was his 55th Test half century, his 11th against the West Indies. 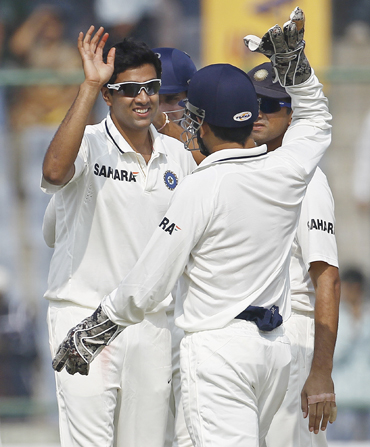 Off-spinner R Ashwin, who took match haul of nine for 128, including six wckets in the second innings, also played a big role in India's triumph.

He became only the third player to win the man-of-the-match award on debut.