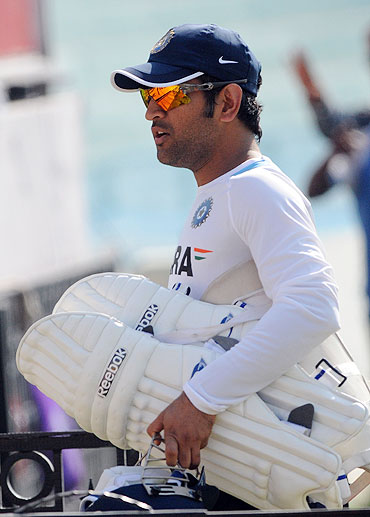 The controversy over poor umpiring in the ongoing Test series between India and the West Indies has taken a new twist as it has now emerged that Mahendra Singh Dhoni was given out off a no-ball on the first day of the second match in Bridgetown, Barbados.

In what could erupt into a major controversy, the television replays ordered to check if Fidel Edwards had bowled a no-ball didn't show that particular delivery, instead some other legitimate delivery was shown to give Dhoni out.

Incidentally, Dhoni was given out off a no-ball even in the first Test in Jamaica.

The latest case was the final delivery of Edwards's 15th over, the 59th of the innings, which had Dhoni offering the catch to Shivnarine Chanderpaul at mid-on.

As Dhoni headed for the pavillion, umpire Ian Gould asked him to stay put as he wanted a reconfirmation from the third umpire that the delivery was legitimate and Edwards had not overstepped the bowling crease.

The Indians have been distrustful of the DRS 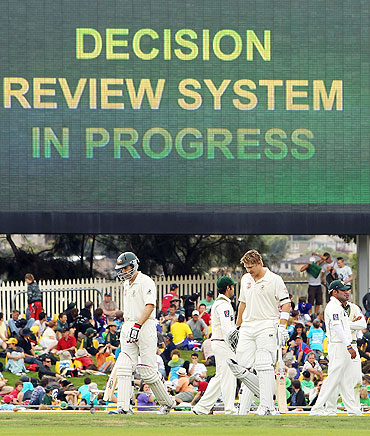 The replays showed that Edwards's front foot had stayed within the crease but it was not the same delivery but a previous legitimate ball which was shown in television replays to judge Dhoni out.

The real delivery, as umpire Ian Gould had suspected, was indeed a no-ball.

India, then 167 for 5, collapsed after the fall of Dhoni's wickets to be all out for 201 in the final session's play.

The Indians have been distrustful of the Decision Review System (DRS), the tracker system in particular, since they believe the person officiating it can make a mistake.

In the case of Dhoni's dismissal, the producer handling the replays for the broadcasters erred by flushing out the replay of some other delivery while the one in question was indeed a no-ball from Edwards.

It further rubbed salt into the wounds of the Indians who are already fuming at the wrong decision which ruled Suresh Raina (53) out and broke his prospering fifth wicket stand of 117 runs with VVS Laxman (85).

Raina was wrongly given out by Umpire Rauf Umpire Asad Rauf had sent Raina packing though the deemed catch to forward short leg had come off the batsman's thighs and not his gloves. A crestfallen Raina stood transfixed at his spot, dropped his bat before slowly trudging back to the pavillion.

Raina was later adjudged to have breached the ICC's code of conduct and docked 25 per cent of his match-fee by Broad.

The first Test had earlier stirred a hornet's nest when Dhoni had publicly chided the umpires as no less than six dismissals were deemed to have gone against his team.

Virat Kohli, Suresh Raina, Harbhajan Singh and Dhoni himself were wrongly given out while the West Indies players were reprieved which opened a can of worms. All these decisions related to officiating umpire Daryl Harper.

The Indians made little secret of their dislike for Harper who now has added his own fuel to the fire by stepping down from the final assignment of his international career -- the third Test of the present series in Dominica which begins from July 6.