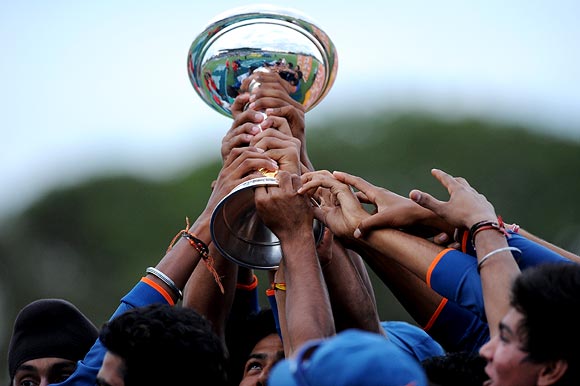 Unmukt Chand led from the front with a magnificent hundred as India Under-19 lifted their third World Cup title after beating formidable defending champions Australia by six wickets in the final in Townsville, on Sunday.

This was India U-19s first triumph after Mohammed Kaif and Virat Kohli led their respective teams to victory in 2000 and 2008 editions respectively.

A magnificent unbeaten 111 by Unmukt and his unbroken partnership of 130 runs with wicketkeeper Smit Patel, helped India overhaul a competitive target of 226 on a bouncy strip with 14 balls to spare.

It was one of the best centuries one could have witnessed at the junior level as Unmukt hit seven fours and as many as
six sixes during his 130-ball knock. 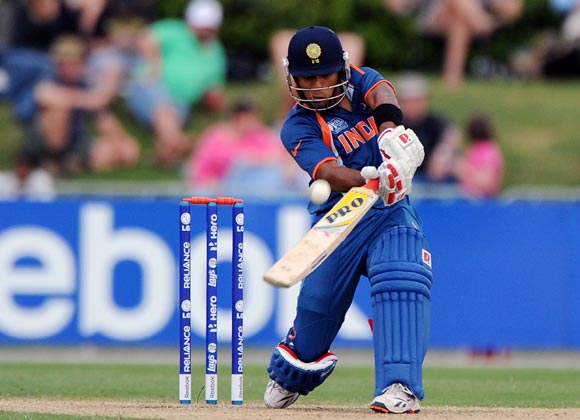 He completed his century with a six over extra cover off Alex Gregory but the celebrations were very muted. The skipper
knew that the job was only half done.

Once Smit, who hit an effective 62, slog-swept off-spinner Ashton Turner towards deep mid-wicket for a four a number of Indian supporters rushed to the ground along to celebrate with the team.

Though four wickets were lost in the chase, it never looked like an uphill task for the Indians, who were subdued in the middle overs but accelerated towards the end to get to the target with ease.

After Prashant Chopra caught down the leg side off Mark Steketee for a duck, Unmukt and in-form batsman Baba Aparajith (33) took the attack to the opposition.

The duo added 73 runs for the second wicket playing the Aussie pace trio of Steketee, Joel Paris and Gurinder Sandhu
with ease.

Chand was phenomenal in the closing stages 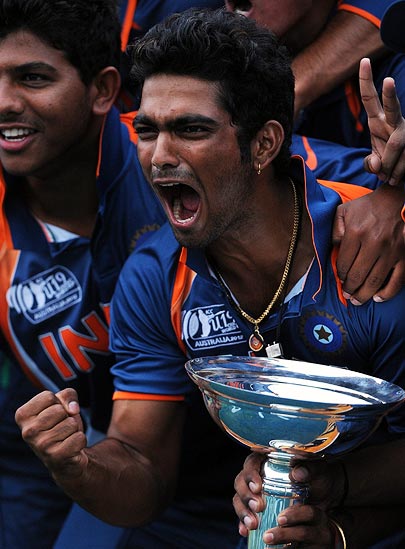 Unmukt, especially, was phenomenal in the closing stages hitting a couple of glorious sixes off Sandhu's bowling.

The first was over long-off while second looked even more spectacular as he presented a full face of the bat with a nice
follow through.

Aparajith on the other hand hit a nice hook shot off Paris and some lovely cover drives that pierced the field.

However, Sandhu had the last laugh when he forced Aparajith to drive on the up and was brilliantly caught by Ashton Turner at short cover.

The Tamil Nadu all-rounder scored 33 off 38 balls with five hits to the fence. Hanuma Vihari (4) and Vijay Zol (1) didn't score much but some damage was done by the number of deliveries that were consumed in the process.

Zol's discomfort against the moving deliveries also frustrated Unmukt who didn't get much of the strike. The Indian captain finally completed his half-century in 68 deliveries.

Zol's agony ended as he edged one off Paris to wicketkeeper Jimmy Peirson. The Bowling Powerplay proved to be useful for the hosts as they conceded only 11 runs in the five overs. 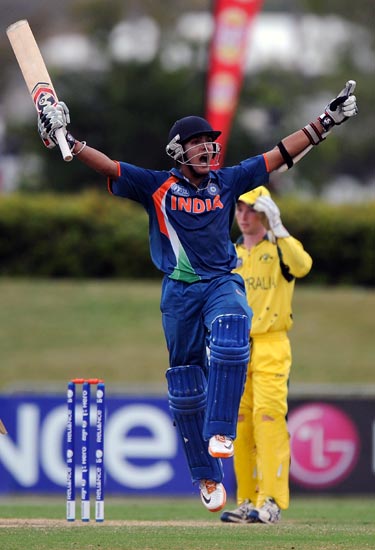 At 97 for four, Smit Patel joined Unmukt and the circumstances were difficult. The boundaries dried up and so did the singles.

It was Smit, who hit fine straight drives as India got their first boundary after 44 deliveries.

Slowly, the two resurrected the innings with singles and twos. There were the occasional boundaries but only a few compared to the flurry of fours that Unmukt and Aparajith hit in the first 15 overs.

Sharma shines with the ball

Earlier, India frittered away the early advantage as defending champions Australia recovered from a shaky start to post a competitive 225 for 8.

Electing to field after winning the toss, India had the Aussies on the mat at 38 for 4 before host skipper William
Bosisto (87 not out) rebuilt the innings with the help of some otable contributions down the order from Tavis Head (37) and Ashton Turner.

Sandeep Sharma who got four for 54 was the most successful bowler.

Both teams named the same XIs that had got them through the knockouts. While Australia, aiming for a fourth title, entered the final undefeated, India had lost one game in the first group stage to the West Indies.