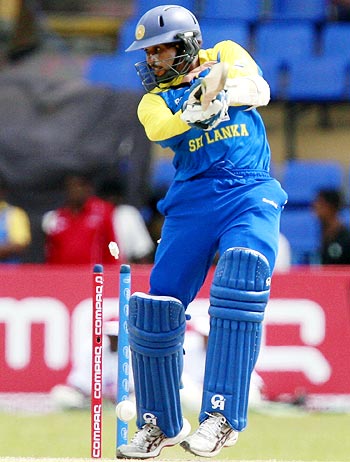 Sri Lanka's Tillakaratne Dilshan looks back as the ball hits the wickets in the opening match of the tri-series against New Zealand in Colombo on Tuesday.

After winning the toss and opting to bat first, Sri Lanka would have ideally liked to have a blazing start to their innings. Opener Dilshan threatened to do just that when he bludgeoned the ball to the boundary to open his account. But he only flattered to decieve and he became a victim of some accurate bowling by Darryl Tuffey.

Sri Lanka went on to win the match by 97 runs in a low-scoring encounter at the R Premadasa stadium.

Jayawardene out for a duck 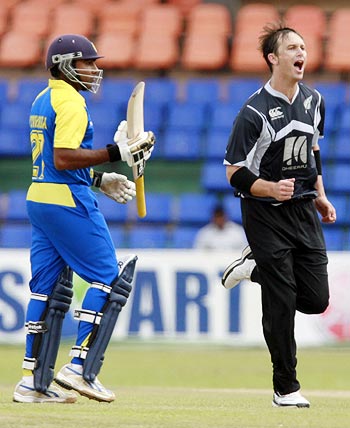 Sri Lanka's Mahela Jayawardene (left) walks off the field after being dismissed by New Zealand's Shane Bond in Colombo on Tuesday.

Former ICL recruit Shane Bond made a magical comeback to international cricket. He bowled with a lot of venom and extracted extra bounce off the pitch to decieve Jayawardene, who was trying to guide the ball through the third man region. The former Sri Lankan skipper failed to read the bounce and only guideed the ball into the hands of Ross Taylor at slips. 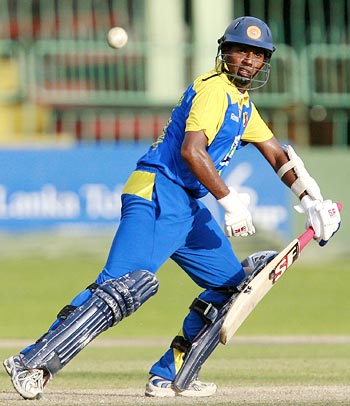 Along with Angelo Mathews, he guided the Sri Lankan innings and helped post a respectable total to give the Lankans something to defend. 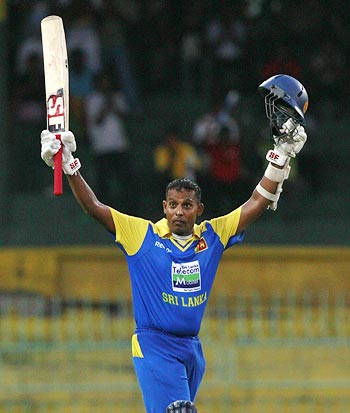 Samaraweera raises his bat and helmet after completing a century.

He showed a lot of character, and after a bad start gave fans something to cheer about when he finally got a boundary in the 27th over off Bond, the first boundary for the hosts after 24 overs. After settling down and gauging the slow pitch, he finally completed his century off 122 deliveries in the 49th over.

Samaraweera became the oldest Sri Lankan to register a maiden century in ODIs, surpassing former captain Arjuna Ranatunga, who was 31 when he got his maiden ODI ton. 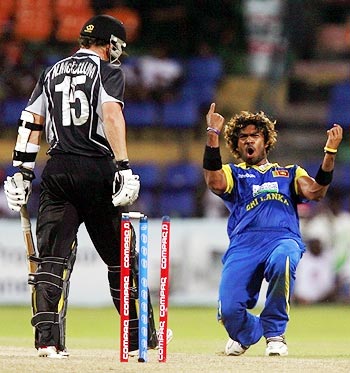 New Zealand failed to get going and lost a few early wickets in the opening overs to be reduced to seven for three in the fifth over of the innings.

But it was Malinga who took the stuffing out of New Zealand's batting, claiming three wickets in his fourth over, including both the McCullum brothers.

Brendon McCullum's misery ended when he was bowled by Malinga while attempting a huge heave across the line. The Kiwi wicketkeeper, known for his dashing batting, scored just 14 from 52 deliveries with a boundary to his credit, as his team plunged into further trouble. (37-4, 18.2)

Three balls later Malinga got the wicket of Oram, caught behind for four, Sangakkara completing a sharp low catch. (41-5, 18.5)

Nathan McCullum lasted just one delivery when he was beaten all ends up by the very next delivery -- a fast, full one -- from Malinga that disturbed his stumps. (41-6, 19)

Sri Lanka have it easy in the end 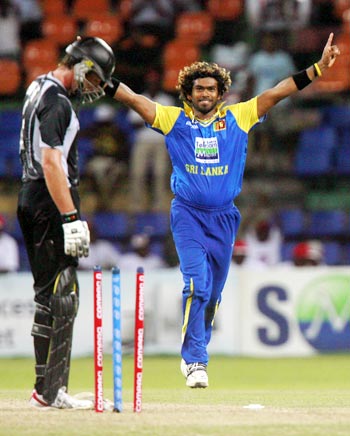 Malinga finished things when he bowled Ian Butler for 25 with a perfect yorker that crashed into the middle stump.

New Zealand were bundled out for 119 in 36.1 overs, giving Sri Lanka a huge 97-run victory and a bonus point along with it.

Malinga was Sri Lanka's star bowler with impressive figures of four for 28 in 6.1 overs.