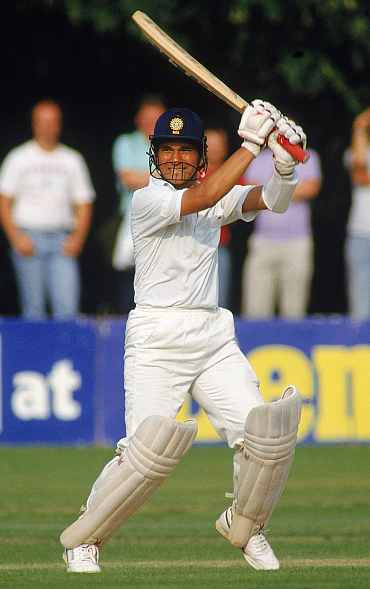 The impact of Sachin Tendulkar on cricket, India and Indians is unparalleled. Shreekant Sambrani on what made the Mumbai Maestro the greatest pan-Indian hero of modern times.

One winter morning in February 1992, we wondered whether India playing Australia on a truly bouncy Perth wicket would get 200, after losing all its star batsmen -- Krish Srikkanth, Navjot Sidhu, Dilip Vengsarkar, Sanjay Manjarekar, Mohammad Azharuddin -- to the pace Merv Hughes generated. At close of play on the second day, India were 135 for 5 with the baby of the team, one Sachin Ramesh Tendulkar, not yet 19, batting on 31.

The next day he went on to score 114, his third Test century. India lost the match, but a star was born. He made 48 more Test hundreds and had many higher scores, but by common consent, that was the very best innings he has ever played in his 200-Test long career ending next month.

My wife remarked that Sachin had become the India sheet anchor. I (and Hughes) agreed wholeheartedly. We wondered whether it was fair to burden one who so young with the awesome responsibility of carrying a team of many recognised stars. The 1826 poem Casabianca by Felicia Dorothea Hemans, which opens "The boy stood on the burning deck/Whence all but he had fled" came to mind. Shoulder the burden he has, for 21 long years since then.

'Yet beautiful and bright he stood,/As born to rule the storm' 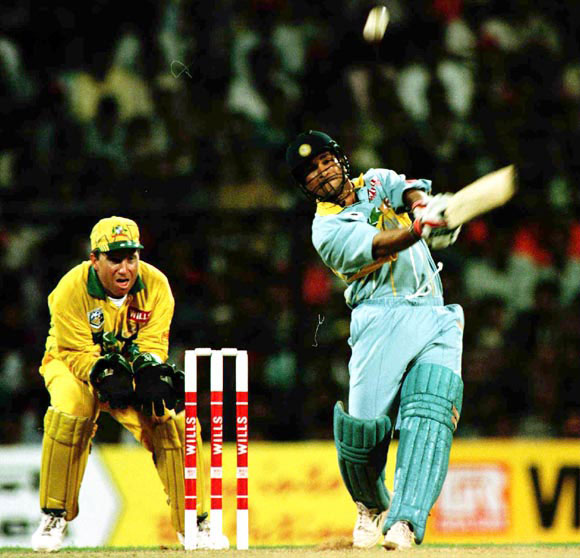 That poem was to be relevant yet again six years later. On 22 April 1998, India were about to be eliminated from the Sharjah three-nation One-Day tournament.

India faced Australia in the last league match and were struggling at 140 for 4 in reply to Australia's 284. A fierce sandstorm interrupted the game. Sachin stood in the players' enclosure, looking grimly at the sand swirling around, much like Casabianca, "Yet beautiful and bright he stood,/As born to rule the storm."

The storm receded, and India had to score 237 in 46 overs to qualify for the final on net-run-rate basis. Sachin and VVS Laxman took the score to 242 in 42 overs, Laxman contributing just 22 to a 104-run partnership. Two days later, Sachin celebrated his 25th birthday by scoring another century against the same Australians, this time winning the match and the cup.

Those two hundreds, again by common consensus, are his best One-day innings, even though he added 34 more centuries, including the first-ever double century since then. 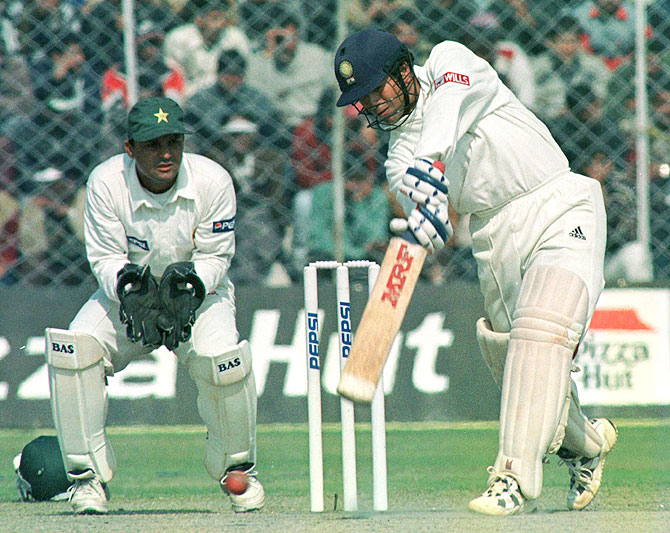 Sachin owns most records in both forms of the game -- most appearances, most runs, most hundreds. Great as these are, they do not half measure his contribution to the game. But India won only 16 Tests when he scored a hundred and drew or lost the remaining 35. Team India was so unreliable for the first dozen years of Sachin's career that it lost despite his stellar performance. The Perth Test was one such.

The Chennai Test against Pakistan in 1999 (when Sachin was captain as well) is a far more poignant case. India needed 271 in the second innings to win. As usual, wickets kept tumbling while Sachin batted on to make 136. Nayan Mongia's 52 was the only other noteworthy knock. Sachin's was the seventh wicket to fall at 254, and the remaining three had to make only 17. But Anil Kumble, Sunil Joshi and Javagal Srinath could add just four.

Later that year, he led the team to Australia, only to lose the three-Test series 3-0. Yet such was his master class in batting that he was named the player of the series. Everyone remembers tall scores in winning causes, but how many recall heroic performances ending up in failures? That was Sachin's lot for most of his career.

Sachin shines with his rectitude and spotless personal reputation 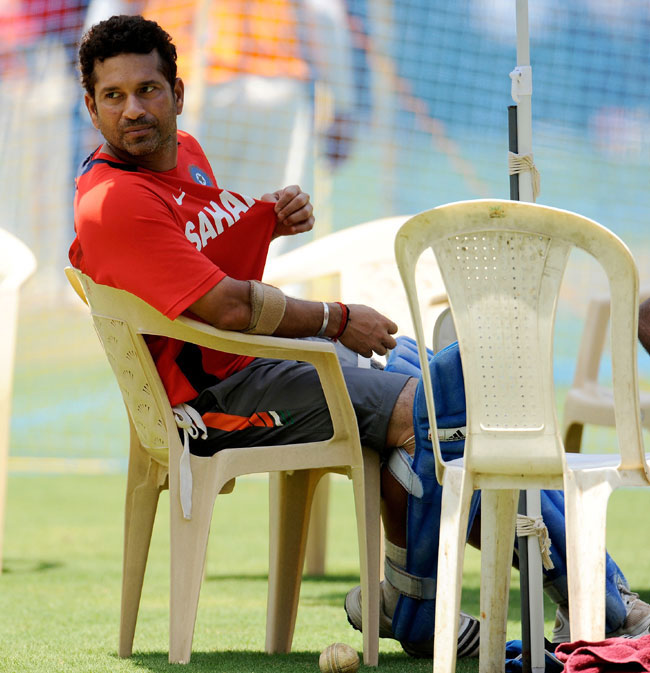 Sachin's greatest strength was the indomitable spirit that drove him. Physical and emotional stress only spurred him on to greater determination. He made a stoic century in the 1999 World Cup two days after he had attended his revered father's funeral.

Sachin shines with his rectitude and spotless personal reputation, at a time when many contemporary athletes with a similar dominance of the game and grip over global audiences have bitten the dust because of unbridled peccadilloes. Sachin is the son every parent wants, a big brother every child looks up to and a student every teacher dies for.

He has made cricket truly India's national sport and a media money spinner. It was his heroics in the early 1990s that started attracting crowds to match telecasts. Advertisers followed and soon the Board of Control for Cricket in India realised that it had an enormous money spinner on its hands. The rest is history.

Sachin has brought the much-needed seriousness of purpose to the game in India. In the process, Indian players and the team as a whole have improved in performance and world rankings. 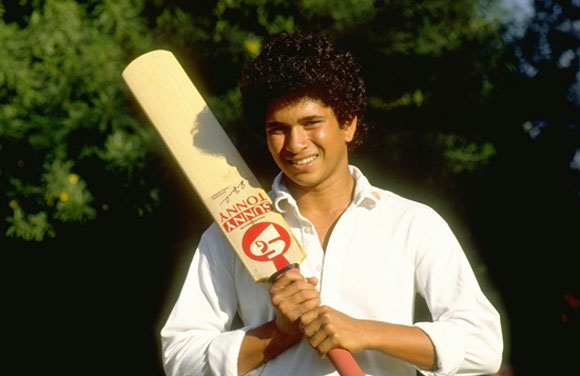 Sachin's feats made us proud when there was very little to be happy about India. He is without exception the greatest pan-Indian hero. His followers are from all walks of life, all classes, and all ages. And he has decisively broken the communal-linguistic-gender walls that otherwise box us into compartments. The very large, knowledgeable, female following of the game in India, is unquestionably due to him.

Sachin unites us all. A Punjabi viewer said after Sachin's double century in ODIs that he had seen God: he is 5 feet 5 inches tall, Maharashtrian and bats for Mumbai.

Murali Kartik, a Tamil who plays for the Railways, said that he had not seen God, but suspected Sachin came close. Javed Akhtar, the poet-laureate of the silver screen, wanted a Bharat Ratna for Sachin. Nana Patekar, the firebrand actor who has occasionally espoused the Marathi cause, said some of the runs were in Gujarati, some in Bhojpuri, but they were all Sachin's.

To be alive, they say, is bliss, but to have watched Sachin play for 24 long years is heaven. Thank you, Sachin, for bringing indescribable joy to our hard lives. Doubtless the greatest cricketer, you will be remembered long after the records have been forgotten or erased for something infinitely more worthwhile: being a Good Man.