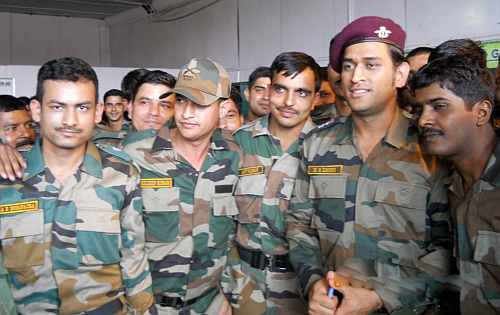 India cricket captain Mahendra Singh Dhoni met with soldiers on the Line of Control (LoC) on Jammu and Kashmir's border with Pakistan on Saturday.

Dhoni, who was conferred the honorary rank of Lieutenant Colonel in the Territorial Army, visited the forward areas on day one of his visit.

The excitement of standing shoulder to shoulder with the tough army jawans in the forward areas was tangibly visible on the face of Lt Col (Hony) Dhoni, who is also affectionately known as 'Mahi' to his countrymen.

For the Jawans it was an opportunity for a vigorous handshake with their icon, who has kept them captivated with his 'helicopter' and other shots for a long time now. 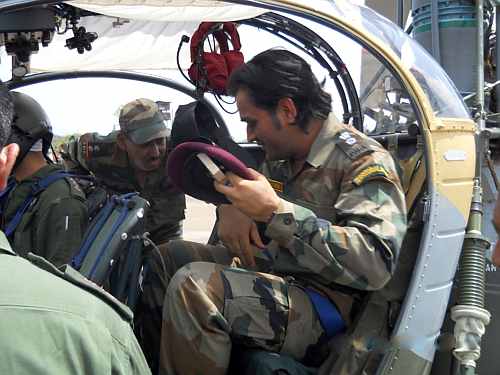 On arrival at Jammu airport, Dhoni interacted with the troops.

On arrival at Nagrota, he first called on the General Officer Commanding, White Knight Corps Lt Gen A.S. Nandal, in his office, where he was presented a souvenir to mark his maiden visit to the Corps.

He took a helicopter ride later.

"Why I got here is because of cricket. I would like to serve actively only after cricket. I don't want my cricket to suffer because that is something I am good at. Once my cricket career is over, I would definitely like to serve in the army," Dhoni said. 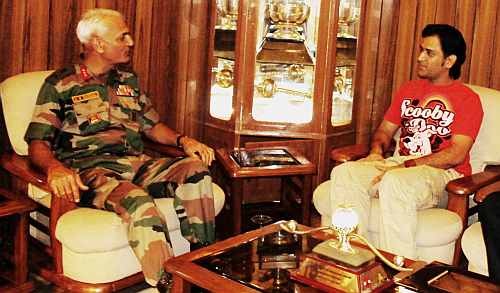 Dhoni is expected to will visit the Northern Command headquarters in Udhampur on Sunday before leaving for Srinagar on a tour of 15 Corps. From there he will head for the 14 Corps area in Leh and also the Siachen base camp.

He will visit north Kashmir's Baramulla district to witness the final of the first phase of Kashmir Premier League at the Shaukat Ali Stadium.