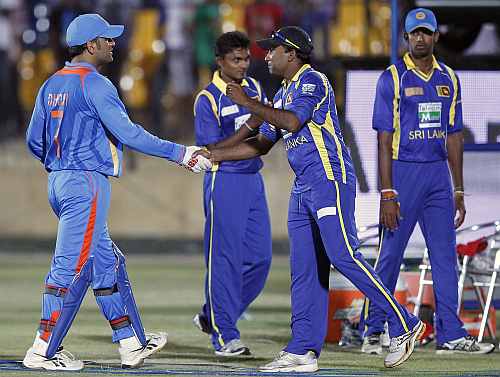 Seamers Thisara Perera and Angelo Mathews shared six wickets as Sri Lanka came back strongly to level the five-match series at one-all with a crushing nine-wicket win over India in the second One-day cricket International on Tuesday.

India, who won the toss and opted to bat, were shot out for 138 off 33.3 overs with only Gautam Gambhir making a noteworthy contribution with a patient 65 off 96 balls, including four fours.

Perera, with figures of three for 19, was named man of the match. Mathews took three for 14.

Sri Lanka knocked off the runs in 19.5 overs, scoring 139 for one with openers Upul Tharanga and Tillakaratne Dilshan posting a first-wicket stand of 119.

Dilshan was dismissed for 50 scored off 49 balls when he top-edged a sweep off spinner Ravichandran Ashwin for wicket-keeper Mahendra Singh Dhoni to hold on to a simple catch with Sri Lanka needing 20 for victory.

Tharanga was unbeaten on 59 scored off 60 balls with eight fours and Dinesh Chandimal was on six not out. 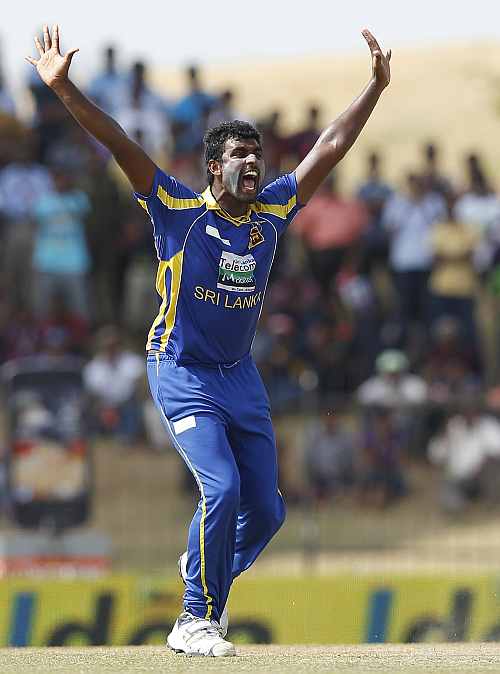 India looked like running away towards another huge total, as they did in the first one-dayer here which they won on Saturday, when debutant Isuru Udana conceded 17 runs in his opening over which included five wides and two crisply hit fours by Virender Sehwag.

Perera, who replaced Udana after that eventful over, turned the game around for Sri Lanka with the wicket of Sehwag (15) whom he brilliantly caught and bowled in his first over.

Off his next over, Perera had the in-form Virat Kohli edging a catch to wicket-keeper Kumar Sangakkara for one. 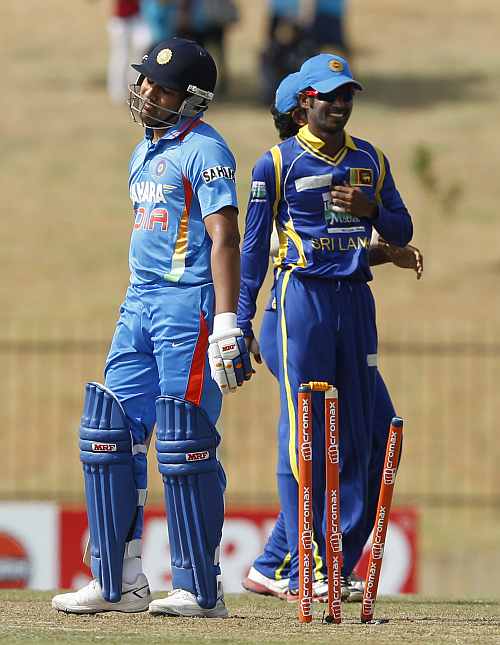 Image: India's Rohit Sharma reacts as he walks off the field after his dismissal during their second one-day in Hambantota
Photographs: Dinuka Liyanawatte/Reuters
Rohit Sharma once again flattered to deceive as he played on while going for an ambitious cut off a very wide delivery from Mathews.

Suresh Raina too dragged one from Perera back onto his off-stump.

Dhoni hit a couple of fours but then went for a non-existent cut shot off a Mathews delivery. The ball reared up from short of good length and there was virtually no room to play the square cut and Sangakkara took the edge.

Gambhir stood tall amongst the ruins 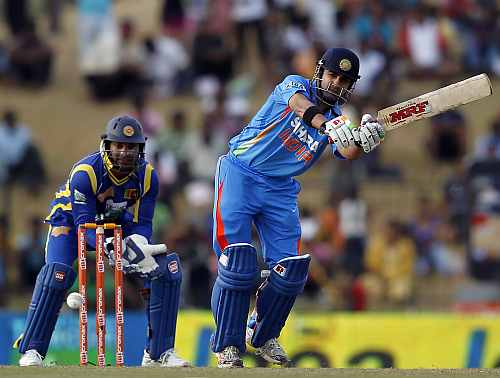 With all the top-order batsmen save Gambhir back in the pavilion before completion of first 15 overs, the southpaw had an onerous task of saving his wicket as well as scoring some runs.

Irfan Pathan too didn't stay long but Ravichandran Ashwin did throw his bat around during a 28-run eighth wicket partnership after which the burly Tamil Nadu offie was needlessly run-out.

Gambhir, meanwhile, got to his 32nd half-century with No 10 batsmen Pragyan Ojha for company. He ultimately ran out of patience as he tried to steer a Lasith Malinga delivery, only for Sangakkara to effect a brilliant one-handed catch. 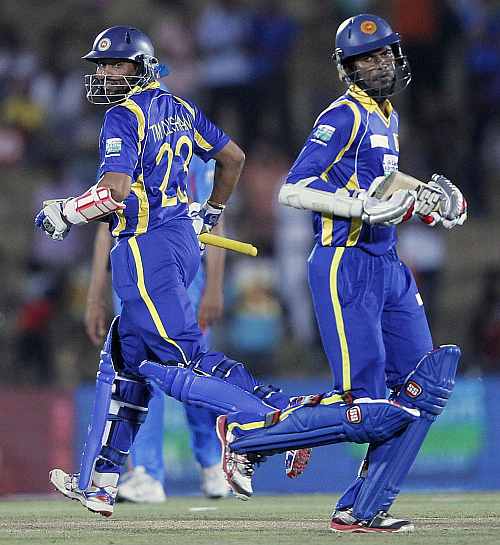 Defending a small target was always going to be difficult irrespective of the conditions and India needed early breakthroughs.

However, the pace trio of Zaheer Khan, Irfan Pathan and Umesh Yadav presented the opening duo with a lot of width as they raced to 64 for no loss before break.

Chasing a target which isn't good enough for even Twenty20 format, Sri Lankan openers Upul Tharanga and Tillekaratne Dilshan added 119 runs as the hosts hardly broke sweat while racing to the target in only 19.5 overs.