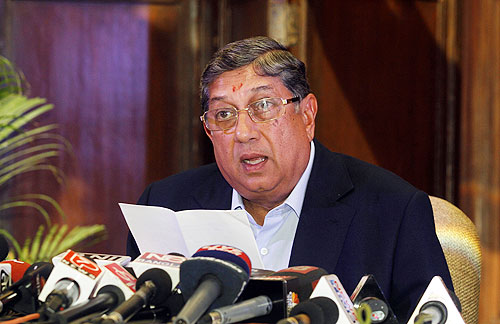 While it is all but certain that beleaguered BCCI president N Srinivasan will have to step down from the president's post, paying heed to the popular demand from the affiliated units, it is learnt that the Tamil Nadu strongman wants three of his demands to be met before he quits.

- BCCI chief Srinivasan likely to step down on Sunday

Srinivasan will face the toughest test in his administrative career in Sunday's emergent Working Committee meeting where members are likely to push for his ouster in the wake of the spot-fixing scandal that has rocked Indian cricket.

Here are the BCCI chief's demands: He should be reinstated as President if he comes out clean after the probe; He should represent India in ICC meetings; Secretary, Sanjay Jagdale, and Treasurer, Ajay Shirke, should not be in the new panel as they ditched him.

However, it is learnt that BCCI members are not in favour of ignoring Jagdale and Shirke in the new panel and are unlikely to accept that demand.

Top Board members are working on a strategy to force Srinivasan to step down, at least till investigations against his son-in-law and CSK Team Principal Gurunath Meiyappan were completed.

Srinivasan will be told clearly by the members that his position was "untenable" under the circumstances and it would be in the interest of Indian cricket that he stepped down on moral grounds.

'Mood in the Board heavily against Srinivasan' 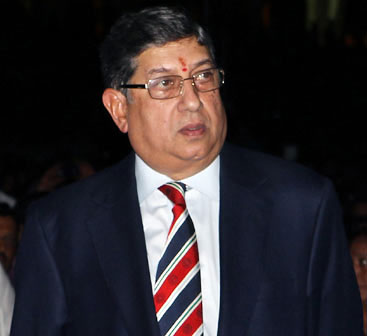 If he continued to remain adamant, most of the Board officials will then have to quit and create a constitutional crisis within the Board, leaving him with no option but to step down.

The working committee has 24 members and it has been largely summoned to gauge the mood which was heavily against Srinivasan.

As per norms, the resignation letters of Shirke and Jagdale will be tabled at the meeting for discussion and the members are likely to vehemently oppose the acceptance of the letter.

"Jagdale and Shirke have done nothing wrong and we expect that majority of members to oppose their resignation. It will be interesting to see how Srinivasan reacts in that situation", "an influential member of the working committee said.

Even if Srinivasan volunteers to step down from his post in order to allow free and impartial investigation into the spot-fixing and betting scandal, he may be questioned over not keeping tab on the activities of his son-in-law Meiyappan.

The other important issue that will come up for discussion is the status of the three-member probe panel as one of members -- Jagdale has already resigned from his post.

"Whether a new member will be added with two retired judges from Tamil Nadu or a fresh panel will be formed will also come up for discussion," the member said. 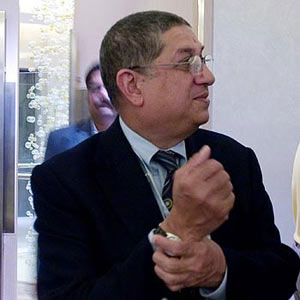 If one goes by the book, Srinivasan can accept Jagdale and Shirke's resignation and choose an interim secretary and treasurer.

As of now, Haryana Cricket Association supremo and IPL governing council member Aniruddh Chaudhary's name is doing the rounds to take over as interim secretary but a lot of associations are averse to taking the plunge right now keeping in mind the far-reaching consequences it can have at the post-September AGM in case Srinivasan is not there.

Key members like Rajeev Shukla, Anurag Thakur and Arun Jaitley along with Shashank Manohar are also planning an "honourable" exit route for the current president.

Manohar's name is being proposed as the interim president but it remains to be seen if that actually happens since he is not part of any affiliated body right now. Shivlal Yadav, the Vice-President from South, is also seen as a possible candidate.