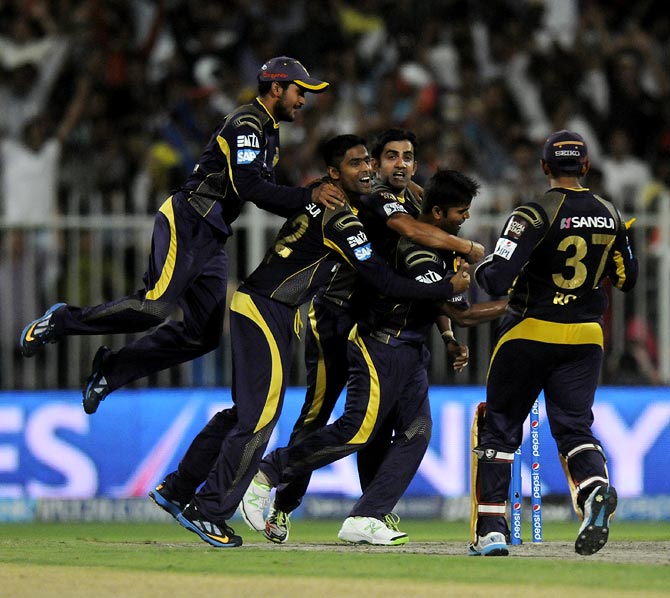 Chris Lynn did the star turn as Kolkata Knight Riders scored a thrilling two-run victory over Royal Challengers Bangalore in the Indian Premier League match in Sharjah on Thursday.

The 24-year-old Australian, playing his first match in this year's IPL, first scored a breezy 45 off 31 balls and then took two catches, the second a breath-taking one on the boundary line to dismiss AB de Villiers in the last over of the match as Kolkata clinched victory off the last ball.

Chasing 151 for victory, Royal Challengers lost their way after a good start and could muster up just 145 for 5 in their 20 overs. 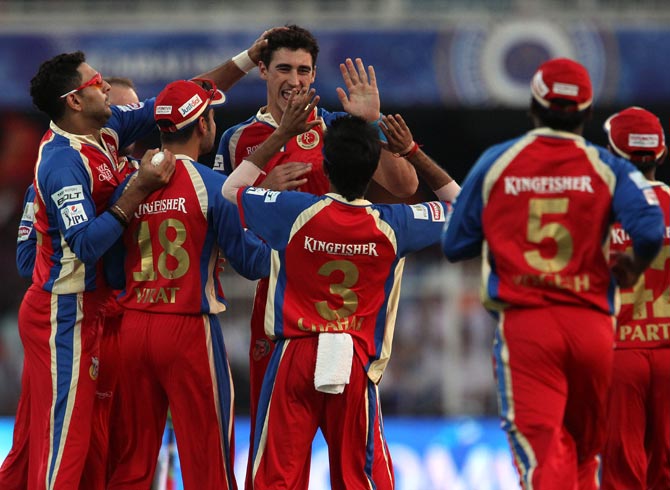 Earlier, Kolkata Knight Riders recovered from the loss of two early wickets to post a fighting 150 for 7.

Sent in to bat, they had yet another disastrous start, losing skipper Gautam Gambhir for a duck for the third straight time in the ongoing seventh edition of the cash-rich event.

The left-handed India discard was trapped leg before wicket by Mitchell Starc, off the third delivery of the innings. He tried to turn a full delivery from the Aussie bowler on the leg side, missed it and was out for a first-ball duck.

Having also failed to score against Mumbai Indians and Delhi Daredevils, this was his tenth duck in the IPL. He now owns the record for most ducks in the IPL, going past Amit Mishra and Jacques Kallis, who failed to score on nine occasions in the event. 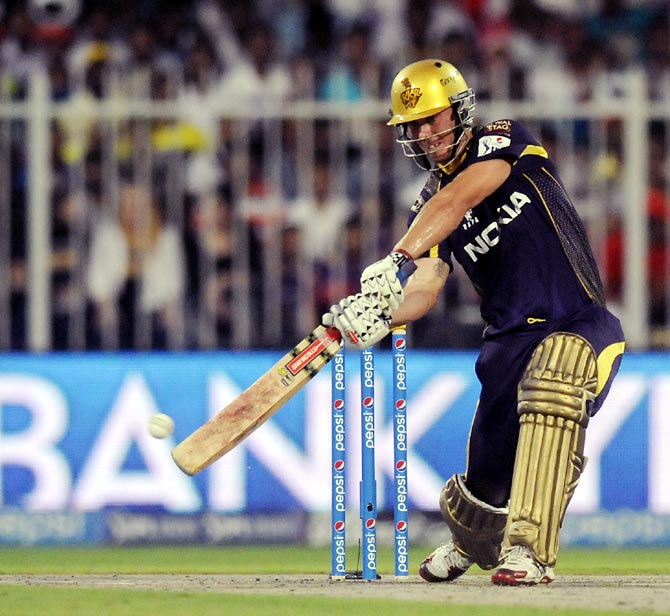 With Manish Pandey (5), who replaced Gambhir,  also departing cheaply, the Kolkata side was in deep trouble at 10 for 2 in the second over. But young Australian batsman Chris Lynn (45) and South Africa veteran Jacques Kallis (43) revived the innings in a third-wicket partnership worth 80 runs.

Lynn, playing his first match in the IPL, hammered three fours and as many sixes in his entertaining 31-ball 45 before he was caught by AB De Villiers, off the bowling of Varun Aaron.

Yusuf Pathan also perished in the same over without scoring, going for a big shot before getting his eye in. He tried to loft Aaron over mid-off but mistimed his shot and was caught by Virat Kohli on the off-side. 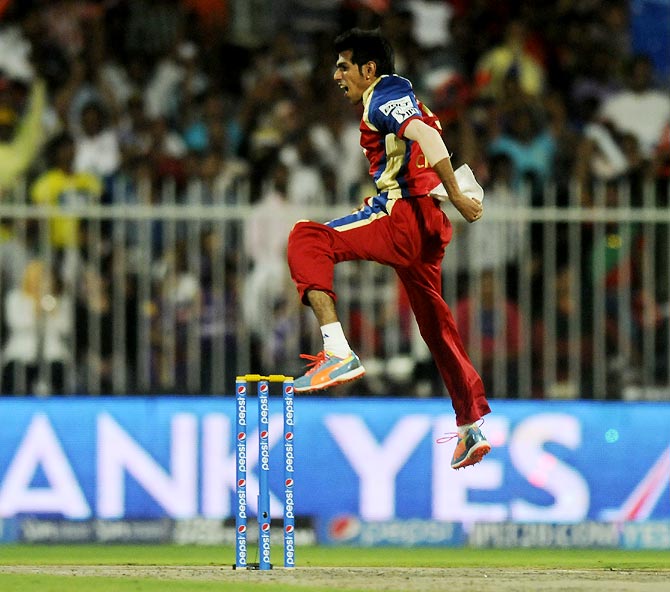 With the top order gone, Kallis went for big hits and picked on leg spinner Yuzvendra Chahal. However, he was unable to get distance and skied a high catch off the 23-year-old bowler to Yogesh Takawale at sweeper cover.

The South African veteran walked back dejectedly after scoring 43 from 42 balls, leaving KKR in trouble at 107 for 5 in the 16th over.

Aaron finishes with three for 16 in four overs 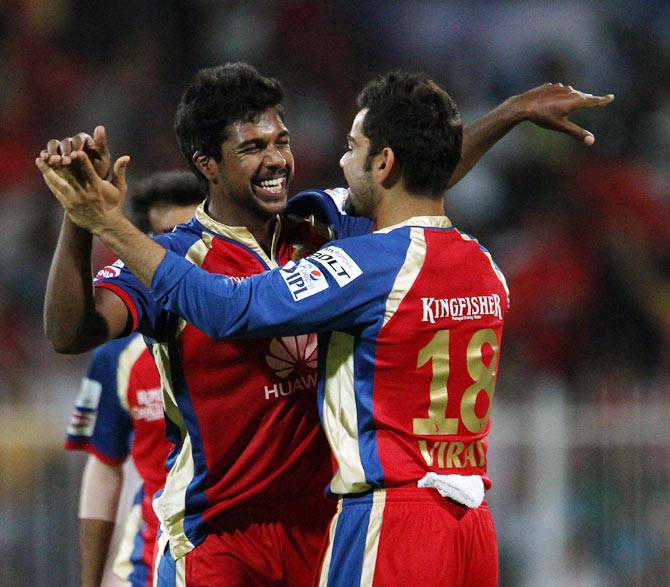 With Kallis also gone, the onus of amassing the runs was on Robin Uthappa. He boosted KKR's run-rate with a couple of sixes, but was thwarted by Aaron, who returned for his final over.

The right-hander targeted the mid-wicket region but failed to get enough distance and was caught in the deep by Starc after scoring 22 from 18 balls.

Suryakumar Yadav (24 not out) was nearly out off the next delivery. Trying to upper cut a short delivery from Aaron, he came down the track, swung wildly and missed, but was lucky to survive.

Aaron conceded just four runs in the over and finished with splendid figures of three for 16 in four overs. 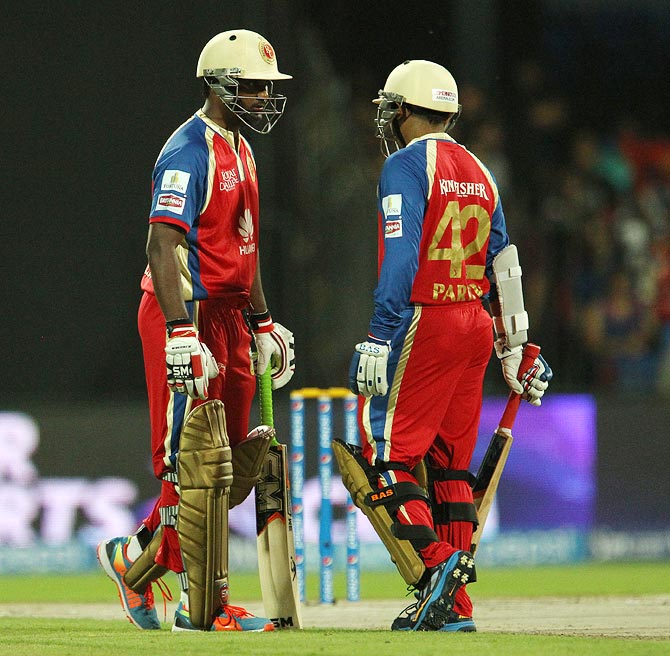 Parthiv Patel and Yogesh Takawale gave Bangalore a flying start as they put on 67 runs for the opening wicket from 46 balls.

Takawale, playing in place of the injured Nic Maddinson, played a smashing innings of 40 from 28 balls, while Patel scored 21 from 19. 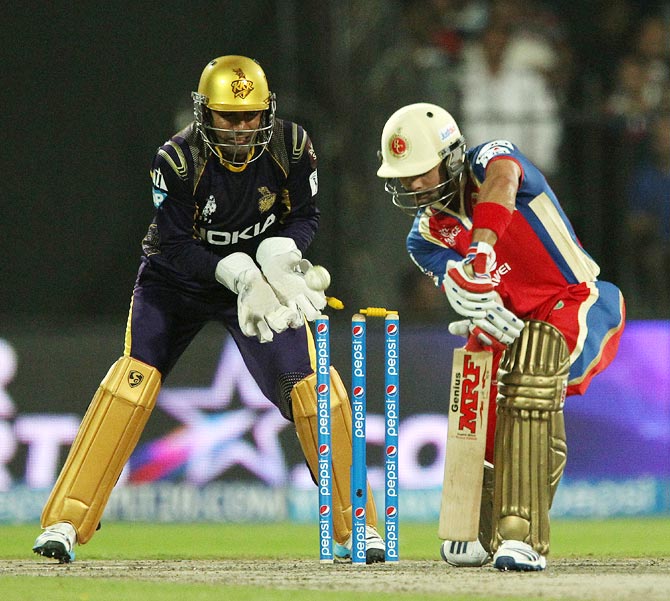 Sunil Narine led Kolkata's spirited comeback with the key wicket of Virat Kohli in his final over, bowling the in-form batsman for 31.

Yuvraj Singh struggled to get going in the closing stages, scoring 31 from 34 balls before he hit a wide delivery straight into the hands of Yusuf Pathan at deep point off Umesh Yadav. 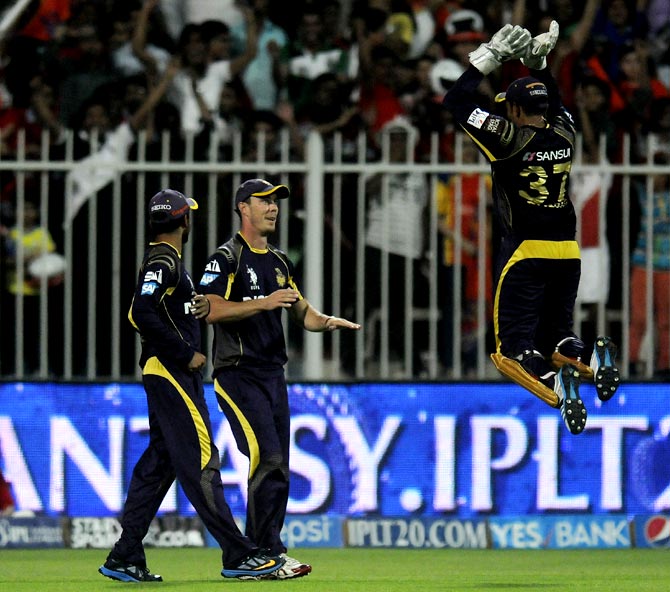 Lynn's stunning catch at deep mid-wicket proved to be the turning point of the match.

The Australian looked out of balance as he initially seemed to have misjudged the catch, but kept his composure and balance to complete a breathtaking catch just inches inside the ropes.

That catch helped dismiss AB de Villiers off Vinay Kumar in the final over, leaving RCB with six to get from two balls. In the end, they fell short by two runs.