Sign in  |  Create a Rediffmail account
Rediff.com  » Cricket » 'I keep coming back to play the IPL because I enjoy it' His Indian Premier League career started almost a year after he quit international cricket. It is his fifth season in a row in the IPL, and he is showing no signs of stopping. This despite the fact that in between two seasons of the IPL he seldom played any serious cricket.

Asked about his fondness for the tournament, Adam Gilchrist's response was immediate.

"I really enjoy playing the IPL. That's why I am keen to comeback and keep playing," he explained.

During his time at the fledgling tournament, the three-time World Cup winner and former Australia captain led the Deccan Chargers to the title in the second edition, in South Africa, an achievement he looks back with pride.
Tags: IPL , Adam Gilchrist , South Africa , Australia

'I have great incentive and desire to be successful here' "I have been very fortunate at experiencing a lot of things in a long career and I have had the good fortune of winning the IPL as well," he gushed, before pointing out the same as the reason for him continuing playing in the tournament.

"I have great incentive and desire to be successful here," he explained.

A glance at his statistics -- an aggregate of 1636 runs in 62 matches (two hundreds and nine fifties) makes him the third highest scorer in tournament, behind Suresh Raina and Sachin Tendulkar -- might just corroborate his explanation, but a closer look at his indifferent recent form negates it.

Most of Gilchrist's success in the tournament came in the first three seasons, with his former team (Deccan Chargers). Since he moved into Kings XI Punjab last year, the Australian has been a shadow of his own self.
Tags: Sachin Tendulkar , IPL , Kings , Gilchrist , Suresh Raina

Gilchrist's Punjab side has been inconsistent Even his wicketkeeping has suffered. At 40, his reflexes aren't what they used to be, and sans them Gilchrist is clearly not the player he was in his heyday.

There were flashes of brilliance reminiscent of yore -- like the 106 against Royal Challengers Bangalore at Dharamsala in his side's penultimate match last season. But they were few and far between.

In a majority of the matches he featured for the Punjab outfit, Gilchrist disappointed with the bat, and his captaincy wasn't inspiring either. The fact that he is helming a mediocre team isn't helping matters as well.

In his first year in charge, Gilchrist's Kings XI side was inconsistent, to say the least. Having started on a good note – winning three of their opening four matches, the Mohali team lost five straight matches thereafter before winning four of their last five and finished fifth, thereby missing out on the knock-out rounds.
Tags: Gilchrist , Royal Challengers Bangalore , Punjab , Mohali , Dharamsala

'Against Pune we had two errors of judgment that cost us' The start to the fifth season is rather forgettable, humiliating defeats in their opening two matches -- to Rajasthan Royals and Pune Warriors India. To his credit, Gilchrist minces no words when dissecting the double disasters.

"Our bowling lacked discipline in the first game," he explained, adding, "It was good in the second till the final 10 minutes. The end wasn't quite right.

While the batting of Kings XI has looked brittle, their captain thinks otherwise.

"It's not a horrific situation with the batting," said Gilchrist.

"We scored 160-odd runs in Jaipur," he continued, adding, "Against Pune we made two bad calls, two errors of judgment and that cost us."
Tags: Gilchrist , Pune Warriors India , Kings XI , Rajasthan Royals 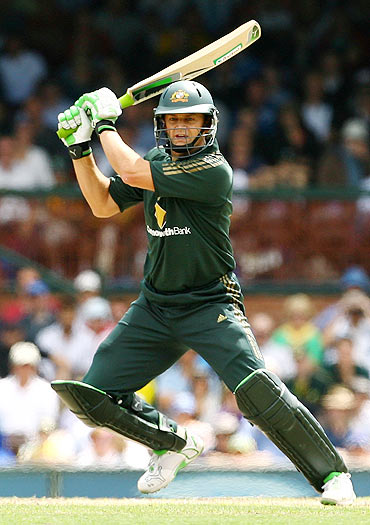 "I've been encouraging the team to press hard while running between the wickets. It's a feature of T20 cricket. It is both risk and reward."

Rather, it is bowlers who need to pull up their socks, believes Gilchrist.

"I think we need more discipline with the ball," he said, categorically.

Gilchrist though isn't ready to throw in the towel yet. He is keen to work out on the flaws of his team, rectify them and ensure the team owners the results they expect.

"At the moment I have got a role with the team and I am really enjoying that," he explained, adding that his own form is not a cause of concern either.

"When I think I'm not performing and not up to the standards, that's the time I'll stop playing," he signed off.
Tags: T20
More
Write a
Comment
Print this
article