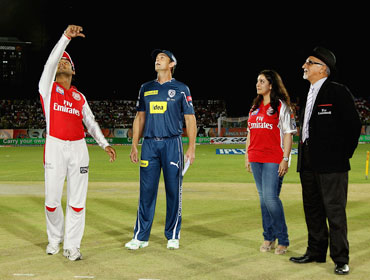 Dharamsala made an entry into cricket's record books on Friday when Adam Gilchrist and Kumar Sangakkara stepped out on the Himachal Pradesh Cricket Association stadium turf for the toss in the Indian Premier League match between Deccan Chargers and Kings XI Punjab.

The HPCA stadium lost the opportunity to host IPL matches last year because of a last-minute change in venue of the tournament to South Africa. 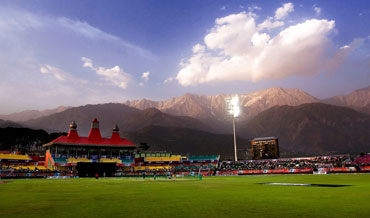 With snow-capped mounts as a backdrop, the Himachal Pradesh Cricket Association stadium is one of the most scenic cricket grounds in India.

It is also among the most modern venues in the country, perched atop the hills of the Himalayan range at a height of 1,457 metres above sea level, surrounded by the majestic Dhauladhar ranges. 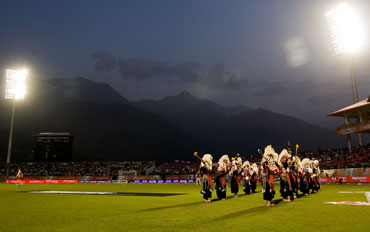 The HPCA stadium became a part of the international cricket map in 2005, when it hosted a warm-up match between the touring Pakistan team and the Indian Board President's XI.

Since then, the stadium has hosted a few of Himachal Pradesh's home matches in the Ranji Trophy, apart from zonal one-day matches.

Constructed with initial cost of Rs 35 crore, it has seating capacity of 18,500 visitors.

It will also host the Chennai Super Kings - Kings XI Punjab match on April 18, when the Dalai Lama will be the chief guest.