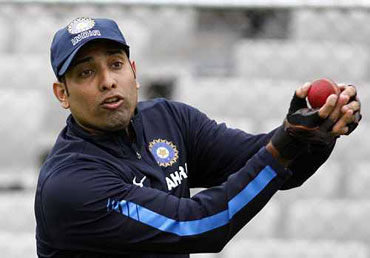 Indian captain Mahendra Singh Dhoni has added more fuel to the intense speculation about his strained relationship with VVS Laxman, when he revealed that he was not invited for a late night party thrown by the retired cricketer at his residence.

Laxman, who retired from the game in controversial fashion just ahead of the series against New Zealand, even though he was selected for the two Tests, threw a party on Tuesday for senior team members Sachin Tendulkar, Virender Sehwag, Gautam Gambhir and Zaheer Khan at his residence in Manikonda in the suburbs of the city. He, however, chose to ignore Dhoni for the bash.

When Dhoni was asked at the pre-match press conference on Wednesday if he was invited by Laxman, he replied in a clear "No".

The skipper also chose to pay little attention to the fact that Laxman could not get through to him to inform him about his immediate retirement plans ahead of the series.

"You think it's a controversy but people who know me always complained that I'm someone who is quite difficult to get hold of. That was one of the reasons why Laxmanbhai could not get hold of me," Dhoni said.

"That's not something new. I have tried to improve but it seems I have not really improved," he said.

Laxman, Dravid's absence will give youngsters chance to prove themselves 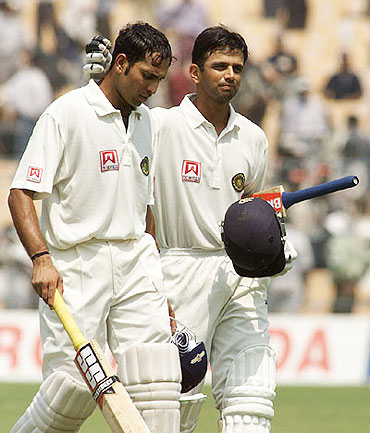 Asked about Laxman's sudden retirement, pat came Dhoni's reply: "You need to ask Laxman about it."

Laxman, who trained hard at the NCA for about four months and also played in two local matches keeping in mind the fresh season ahead, suddenly announced his retirement last week, fuelling speculation that all was not well in the Indian camp.

According to unconfirmed reports, Laxman was handed a two-match ultimatum by one of the selectors.

The elegant middle-order batsman, known for his second innings heroics including an epic 281 against Australia in Kolkata, was unhappy about the ultimatum which is believed to be the reason behind his sudden retirement.

Laxman's retirement came after Dravid bid adieu to the game in March in the aftermath of India's 0-8 rout in England and Australia.

Dhoni said the team would miss the duo but felt that their absence would provide opportunity to youngsters to prove their mettle.

'We are hoping we won't miss them in the slip cordon' 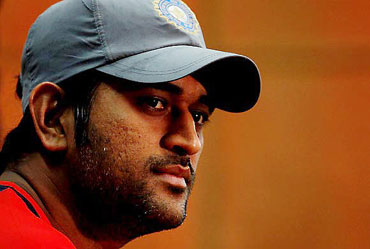 "Definitely these are our two great players and we will miss them on the field. But that's how it is," he said on the eve of series opener.

The duo's absence would mean that India would have to fill in the void at the slip cordon, of which Laxman and Dravid were integral part. But Dhoni hoped that Virender Sehwag, Suresh Raina and Virat Kohli would take up the responsibility.

"We are hoping that we won't miss them in the slip cordon. When it comes to scoring runs and the experience they had, it would be quite difficult. That's one area where we will definitely miss them," the skipper said.

"But we don't think we will be short of fielders. We have players like Virat Kohli, Suresh Raina, Virender Sehwag who are already fielding at the slips. We have seen the youngsters catch the ball really well. Sehwag most likely will stand at the first slip.

"With the spinners, there might be a bit of issue. It's challenging when there's bounce. We will miss Rahul over there. But let's look ahead and hope one of the youngsters take this opportunity and take a few good catches there," he added.
© Copyright 2022 PTI. All rights reserved. Republication or redistribution of PTI content, including by framing or similar means, is expressly prohibited without the prior written consent.