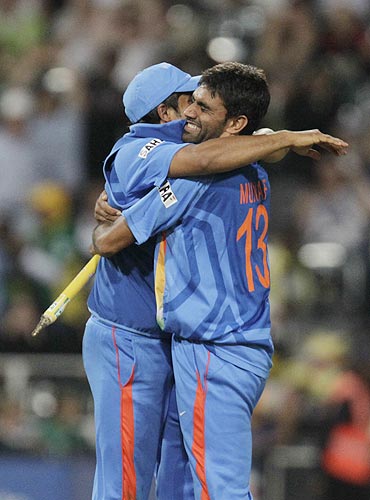 Although the batting department flopped yet again, the bowlers led by a brilliant Munaf Patel brought India back in the series with the narrow one-run win over South Africa in the second ODI in Johannesburg, India captain Mahendra Singh Dhoni said.

With figures of four for 29, Munaf led India's stunning comeback to bowl out South Africa for 189 after the visitors had posted a paltry 190 on the board at the New Wanderers stadium on Saturday.

Munaf, who accounted for important scalps of dangerman Hashim Amla and Graeme Smith, combined well with Zaheer Khan (2/37) upfront to script the historic win and help India level the series 1-1.

"We got off to a decent start though it was bit slow but then we lost wickets in quick succession and because of that we could not post a big total. During the batting power play we lost vital wickets," Dhoni said in the post-match press conference.

"Bowlers brought us back in the game. Munaf did the trick for us as getting Amla out was crucial. I think Munaf's spell was brilliant. He bowls straight and varies his pace well. He deserved the man-of-the-match award," he said.

'Bhajji's contribution was vital too' 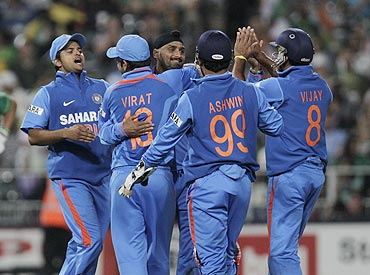 The India skipper also lauded off-spinner Harbhajan Singh (1/32) for his spell in the middle overs.

"Bhajji's (Harbhajan) contribution was vital too as he bowled that 7-8 over spell in the middle. The momentum was on South Africa's side when Bhajji came on to bowl. The South African batsmen took a decision not to attack him and by doing so they shifted the momentum slightly in our favour," Dhoni said.

The bowlers' performance, notwithstanding, it was Yuvraj Singh (53 off 68 balls), who together with Dhoni (38 off 61), revived India's innings with an 83-run fourth-wicket after the visitor's lost their first three batsmen for 67 runs.

And Dhoni admitted that Yuvraj is a crucial cog in the Indian ODI team.

'Yuvraj crucial to our batting' 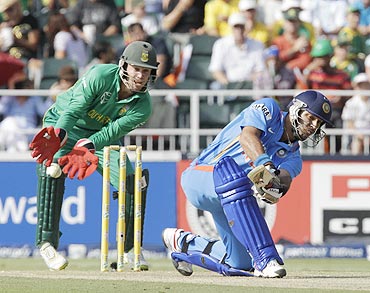 "His (Yuvraj's) role in the batting lineup is crucial. If we get good start then he can come and score quick runs and if we lose few wickets then he can control the game with a solid innings. He played very well in the match.

"It is important that Yuvraj gets into good form. He is  now a decent all-rounder for us as he also bowls a few overs," the Indian captain said.

With South Africa needing 12 more runs to win from 60 deliveries with two wickets in hand, Dhoni gave the ball to part-time spinner Suresh Raina and the Indian skipper said it was a chance he took which could have backfired. 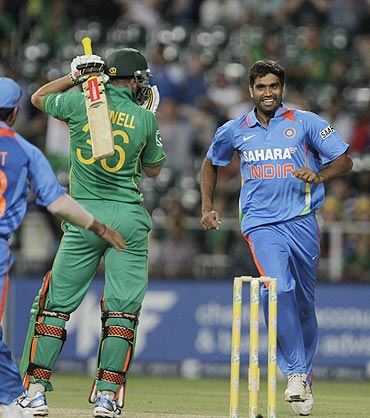 "It was an important decision. I thought that if a spinner bowls he may hit the pads and get one batsman out. Normally, he (Raina) bowls well to left handers. Sometime you have to take chance like this," Dhoni said.

He said the narrow loss in the second ODI will continue to haunt South Africa, who are desperate to shed their "chokers" tag in world cricket.

"Playing under pressure is totally different scenario. If South Africa lose matches like this they have to face the criticism of being called chokers. That's one thing which will haunt them," Dhoni said.

"Same is the case with India as far as playing in the finals of tri-series is concerned." 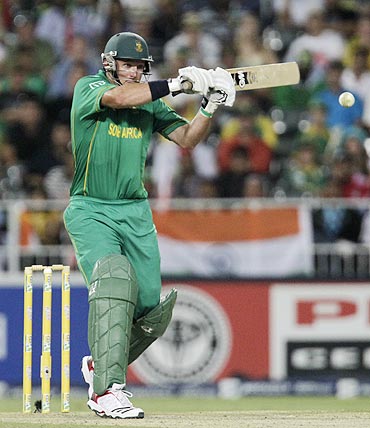 South Africa captain Graeme Smith, who led from the front in South Africa's run chase on Saturday with a fluent 77 off 98 balls, was of the view that the Wanderers pitch was not suitable for stroke-making and the batters needed to apply themselves to score runs.

"I think it was not a free-flowing wicket. It was not easy to play shots on this wicket. The ball was stopping and coming, especially the change of pace deliveries. You need a solid performance to win this type of match and not personal glory," he said.

"It would have been wonderful if I could have batted through but I was done in by a good slower ball. While batting we lacked in decision making. We have to work on our shot selection," Smith said. 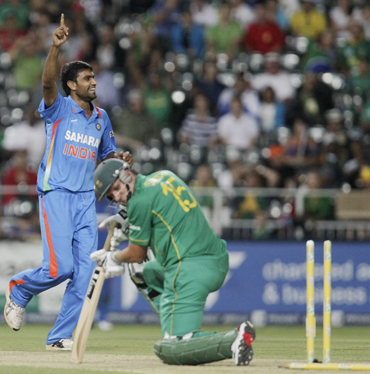 "We were great with the ball as well as in the field but we were not smart enough at crucial times. We need to work on these areas. One loss doesn't make us bad players," Smith added.

Asked whether South Africa used their batting power-plays to perfection on Saturday, he said, "The decisions to take batting power plays were right but unfortunately we lost wickets. It was quite disappointing for us not to have crossed the winning line. We were not at all complacent coming in to this match."

He also lauded India's wrecker-in-chief Munaf Patel, who accounted for him as well as dangerman Hashim Amla during his four for 29 runs match-winning spell.

'Hope Tsotsobe continues to bowl well for us' "This type of wicket suit Munaf's bowling style. He has got lot of variation in his bowling. He mixes up those slower balls very nicely," Smith said of the Indian right-arm pacer.

He was also full of praise for South Africa's left-arm fast bowler Lonwabo Tsotsobe (4/22), who notched up his second successive four-wicket haul in the series.

"He (Tsotsobe) started well in Abu Dhabi while playing against Pakistan. He has gained a lot of confidence. He bowled very well today and I hope he continues to do well for us," Smith said.