The turning points of the Edgbaston Test 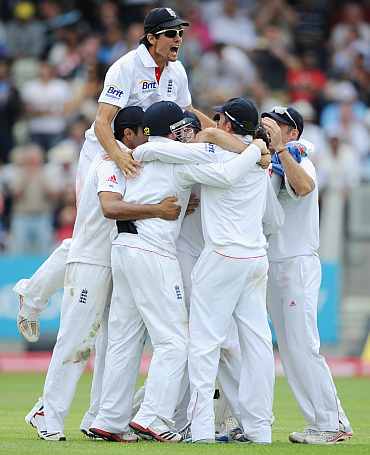 Where did India go wrong in the third Test? How did England win in four days? Bikash Mohapatra, who was at Edgbaston, identifies the turning points in the match.

It's all over for Team India.

England's thumping innings and 242-run win at Edgbaston ensured them the series (3-0) and the possibility of inflicting a whitewash.

Besides, it meant the hosts succeeded their guests as the top Test-playing nation in the ICC rankings.

If the defeat at Lord's was disappointing, and that in Nottingham was, well, shattering, at Edgbaston it was a catastrophe.

No words can explain the calamitous show that Team India put up in the third Test, the result itself being self-explanatory.

A first series defeat in three years -- after the 2-1 reverse in Sri Lanka in 2008 -- will no doubt be a difficult pill to swallow. So would be losing out the top spot in such a humiliating manner.

As the battered Indian team regroups and tries to prevent the score line from getting worse at The Oval next week, rediff.com takes a look at the turning points in the Edgbaston Test.

Day One: Sehwag back in hut off the first ball 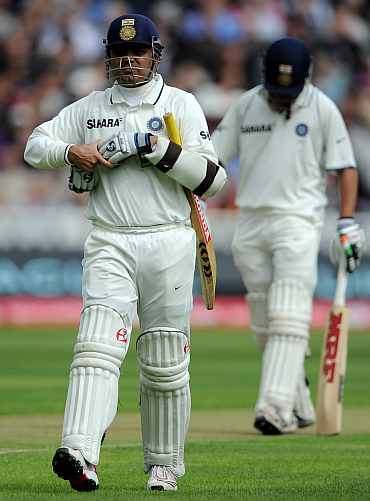 It has to be the start of the Indian innings.

Losing the toss in overcast conditions, it couldn't have been worse, so to speak.

Down 0-2 in the series, with the chance of squaring it at most, the visitors got an early shock at Edgbaston when Virender Sehwag, expected to bring a change to India's fortunes despite not playing any form of cricket in more than three months, perished first ball -- caught behind off Stuart Broad.

The Master Blaster, in particular, was guilty of playing a loose shot, edging an away swinger from Broad straight to Anderson at third slip.

The visitors lost four vital wickets in the opening session, going into the break at 75 for four.

Three more wickets soon after resumption meant the visitors were reduced to 111 for seven.

There was no coming back thereafter. 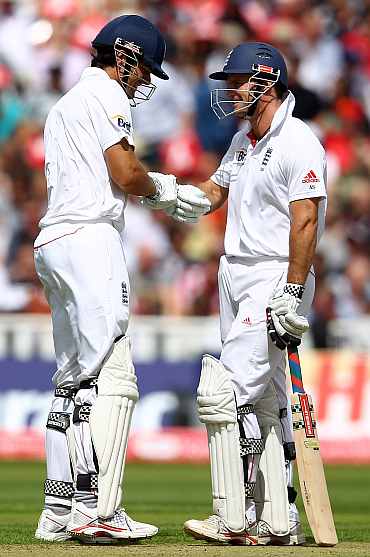 An early morning drizzle may have threatened to affect the second day's play, but it was good news for India.

As the rain escalated, it increased the hopes of the many ardent fans that came a long way to watch this Test. It would help the Indian bowlers make crucial breakthroughs early on, they felt.

Only 17 runs came off the first 10 overs and it took 86 balls (14.2 overs) before the first boundary was scored, courtesy an Andrew Strauss edge to third man off Ishant Sharma.

The second boundary didn't take as long. Two balls later, Cook leaned on to a full delivery and hits an exquisite drive to extra cover. It was only the fourth scoring shot of the day for the 26-year-old but it marked the point where the England openers broke the shackles.

The fact that the weather cleared subsequently, with the sun hitting hard at the surface, further compounded the visitors' woes. With the wicket offering no assistance whatsoever, the Indian bowlers went through the motions, making scant impact.

There were a slew of boundaries thereafter, with both the batsmen freeing their arms. Going into the lunch break, the home team was comfortably-placed at 157 without loss.

It was a poor session from an Indian point of view. The body language of the players said it all. They were hoping for things to happen, rather than making them happen.

And that was the point when they completely handed over the initiative to England. 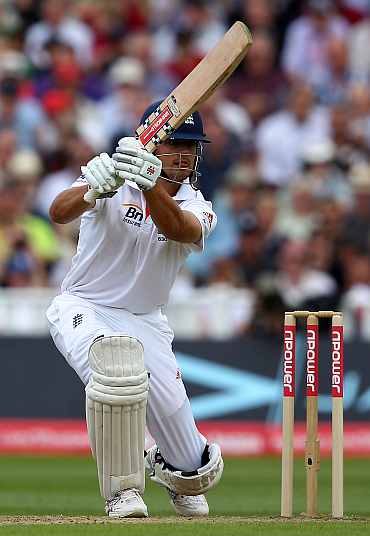 Alastair Cook it was. Who else?

It was an innings that will be remembered for a long time to come.

It wasn't about class. It was about grit, determination, and fortitude.

In the final analysis, Cook may have fallen short by six runs (of a deserving triple hundred), but he ended up bolstering his fast-growing reputation.

The 26-year-old's 294 was the pivot around which England amassed 710 for seven (declared) in their first innings, his 545-ball innings inclusive of 33 hits to the fence.

It was the sixth highest Test score by an England batsman -- only behind Len Hutton, Wally Hammond, Graham Gooch, Andy Sandham and John Edrich.

The home team declared the moment he was dismissed, leaving the visitors a tough last hour to negotiate.

The pressure of having to score 487 runs, just to make England bat again, definitely played on the Indian batsmen's minds. Sehwag achieved a dubious record (a king pair), when James Anderson had him caught by Andrew Strauss at first slip.

It was hope against hope thereafter. Having lost Sehwag early, it was imperative that the frontline Indian batsmen stood up and performed on day four.

However, it was not to be.

When Gambhir guided the first ball he faced in the day, off Anderson, safely to Graeme Swann in second slip, the writing was on the wall.

With Anderson coming back to dismiss Rahul Dravid in the next over, the visitors had lost both their overnight batsmen inside the first four overs of the day, both failing to add to their overnight score.

Laxman, Suresh Raina and Tendulkar followed, reducing the visitors to 116 for six at lunch.

Expecting the team to comeback from then on would have been wishful thinking.

Kudos to them for reducing the margin of defeat; it could have been India's worst Test defeat ever!