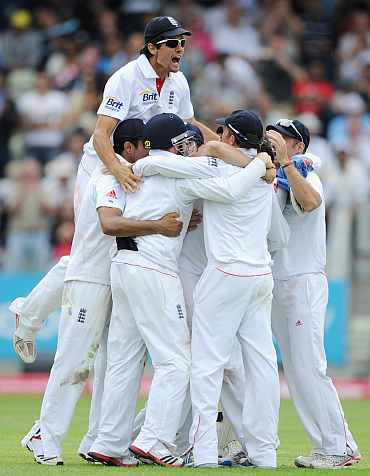 A spineless India tamely surrendered their number one status to a ruthless England as they slumped to an innings and 242-runs defeat to allow the hosts clinch the completely lop-sided four-match series by taking a 3-0 lead at Edgbaston.

India's nearly 20 months reign as the number one ranked Test team could not have ended in a more shambolic manner as they folded up for a paltry 244 in the second innings with an entire day to spare in what has turned out to be one of their worst overseas tours in recent history.

After conceding a mammoth first innings lead 486, the Indians had to bat out of their skins to save the game but the famed batting line-up fell like a pack of cards yet again to give the hosts their second successive victory within four days.

James Anderson was the pick of the English bowlers as he ripped through the top order to finish with figures of four for 85 while Stuart Broad (2/28) and Graeme Swann (2/88) chipped in to provide the finishing touches to the emphatic victory. 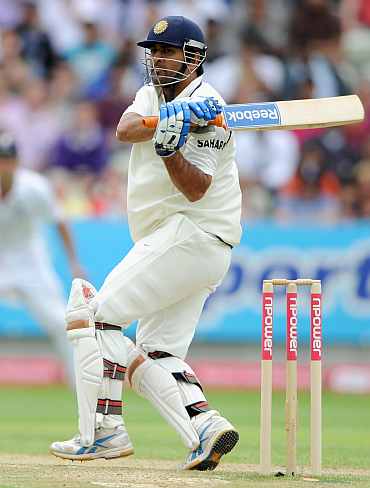 The worst defeat for India till now is by an innings and 336 runs against the West Indies in Kolkata in 1958 and the hapless visitors managed to avoid that ignominy.

Gasping at 130 for seven at one stage, captain Mahendra Singh Dhoni (74 not out) and Praveen Kumar (40 off 18 balls) unleashed some lusty strokes during their 75-run eighth-wicket partnership to provide some entertainment and delay the inevitable.

Sachin Tendulkar (40) was the only other batsman who managed to score some runs in the second innings before being tragically run our while most of the others played poorly on an Edgbaston track which certainly was not unplayable.

What had been billed as a high-profile series between two top teams has been reduced to a complete mismatch with the Indians being made to look like pushovers.

England will now look for series clean sweep when they travel to London for the fourth Test beginning at the Oval from August 18. India, who resumed at their overnight score of 35 for 1, came off the wheels in no time and all the talk of a better resistance from the visitors in the second innings proved to be no better than rhetoric.

This is only the second time in last 11 years when India has lost or been down in a series by 3-0 margin. Sachin Tendulkar's men had a similar unworthy distinction on the tour to Australia in 1999-2000 series.

India lost five wickets in the first session and the final four in the 90 minutes from the afternoon session.

The overnight batsmen Gautam Gambhir (14) and Rahul Dravid (18) failed to add a single run to their totals. Both fell to James Anderson who also claimed VVS Laxman (2) to snuff the fight out of the visitors.

Graeme Swann had a hand in the other two dismissals -- claiming Suresh Raina (10) out leg before wicket and touching a back-drive on to the non-striker's end which found Sachin Tendulkar (40) out of his crease. 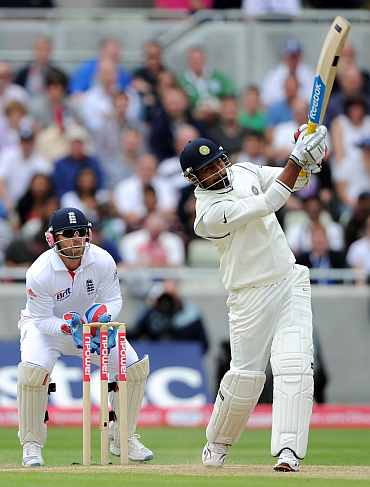 The afternoon session, against the run of the play, lasted a good 90 minutes as the visitors, through a mixture of luck and Dhoni's slambang methods, added 128 runs from a mere 17-odd overs.

Amit Mishra played a few attacking strokes to race into 20s before Swann claimed his second wicket in his dismissal.

Mishra, good while he lasted at the crease, left hitting against the break of Swann and lofting it to mid-off where Broad used his height to good advantage to pluck the overhead chance.

Next man in Praveen Kumar was rattled when a James Anderson delivery reared up and hit him on his right thumb. The spirited medium-pacer looked in extreme pain and threw his helmet down on the ground in disgust.

After medical attention on the pitch, Praveen kumar vent out his anger on Graeme Swann, smashing him for three successive sixes over long on.

The merriment came to an end when Strauss replaced Swann with Broad. Off the second delivery off the tall fast bowler, Kumar backed away to slash it over the off-side field but succeeded only in lobbing it for Ravi Bopara to take the catch.

Kumar's entertaining knock of 40 came off only 18 balls and he hit five fours and three sixes. He added 75 runs off only 44 balls for the eighth wicket with his skipper. 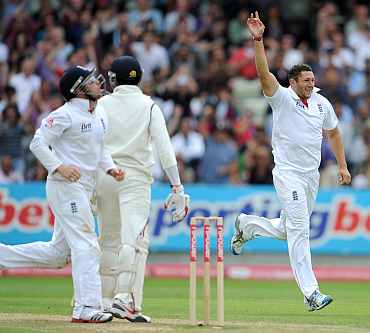 India soon were nine wickets down when Ishant Sharma played back to Broad and was adjudged leg-before-wicket.

Last man Streesanth, like a few before him, also took a body blow when a rising Broad delivery hit him in the stomach. A few deliveries later, Broad again hit him painfully on his right elbow.

Dhoni tried to shield him by trying to manipulate the strike and the tactics was good enough to add 23 more runs to the total.

Sreesanth was the final man out, edging one to Kevin Pietersen to point region.

Dhoni remained unbeaten on 74, made off 79 balls in 123 minutes of batting and including 13 fours.