How ads are sucking the fun out of cricket 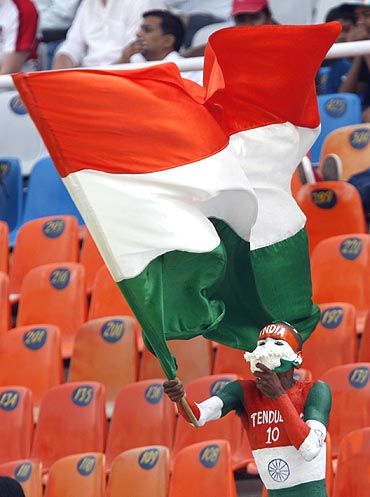 'Initially the ad-breaks were strictly adhered to: in between overs, during drinks-break and dismissal of a batsman. Then the ad time increased, and cricket became what you saw between ads,' says M P Anil Kumar.

When I told him that I do not watch IPL matches, the expression of disbelief on his face had to be seen to be believed. The bemused man was none other than the editor-in-chief of Rediff.com

I started playing cricket in my alma mater (Sainik School, Kazhakootam, Kerala), and wore the school colours for two years. I was so passionate about cricket that despite the crammed day in the National Defence Academy and the Air Force, I would somehow steal morsels of the telecast or radio commentary to keep track of every match India played.

I still remember slithering out of a two-layered sleeping bag in the sub-ten-degree small hours of Leh to be ready to watch the first ball bowled at 4:30 am in an ODI between India and New Zealand played at Launceston (Tasmania) in February 1986.

Many colleagues gave up me as loony when I spent a good part of two days watching Mudassar Nazar and Qasim Umar plod, plod and plod, in one of the most boring matches in Test history -- India vs Pakistan, second Test at Faisalabad, October 1984.

Two things lessened my interest in watching cricket on the telly. The first turn-off was the match-fixing expose.

The second is the ad-infested, viewer-unfriendly telecast of the matches (ah, those were the days when Doordarshan telecasted the matches without commercials).

Please click on Next to continue to read M P Anil Kumar's column.

Please read his last column: Of Gavaskar and memories of the Cup

Also read: The Pilot who is a Fighter

Can anything be done to make cricket telecast more viewer-friendly? 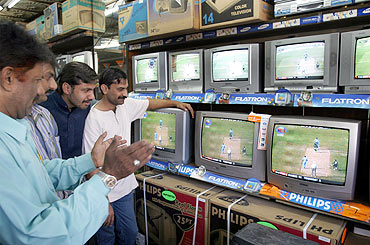 Sponsorship and advertisement monies are the lifeblood of modern-day cricket. And I do not grudge the cricket associations and the broadcasters making money, or those who want to sell their products and services through television adverts.

What repels me is the reckless manner in which adverts are inserted when an over is in progress.

Initially the ad-breaks were strictly adhered to: In between overs, during drinks-break and dismissal of a batsman. Then the ad time increased, and viewing the first ball of the over became a privilege.

In short, cricket became what you saw between the ads.

Then some spoilsport invented the L-shaped space to run ads concurrently with the over. Which is gross, an insult to the viewer. But who cares about the viewer?

Since nobody resisted the invasion of ads, the channels became even more temerarious; lately, ads are popping up anytime, anywhere, anywise, even in the space between the batsman and the slip-cordon.

If this goes unchallenged, mark my words, the L-shaped space would appropriate permanent tenancy, and the day is not far when cricket action would be confined to a window on the screen while the ads would go on uninterrupted in the 'L'.

Cricket would become what you see between and among ads.

Of course, the broadcasters parrot the standard justification: They say they shell out hefty millions to acquire the telecast rights, and they have to overfeed the footage with ads to recover the expenditure.

Can anything be done to make the cricket telecast more viewer-friendly?

Whatever the justification, the greed of the cricket administrators and broadcasters are too undisguised for even a halfwit to discern. Neither the rule of law nor the fear of God has made any dent on human greed. Greed is simply an unstoppable force. So we are up against it.

Sure, the otherwise despotic BCCI can crack the whip and motion the broadcasters to fall in line. While the BCCI has always smiled on the sponsors and broadcasters, it's been indifferent to the spectators and viewers though they too have a stake in the game.

So, to expect the BCCI to twist the arm of the broadcaster is like expecting the CBI to transform into a proficient and independent agency. 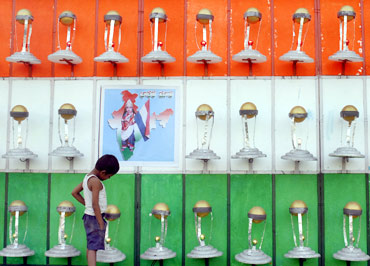 There is a solution. The root cause of the problem is the award of 'exclusive telecast rights' by the ICC and the boards. Anything 'exclusive' will eventually breed monopolistic practices.

Since a broadcaster has exclusive rights, the viewers are forced to swallow whatever he dishes out. So, do away with the exclusive telecast rights.

At present, there are at least five entities who telecast sports -- Doordarshan, ESPN-Star, Ten, Neo and Sony (hereafter referred to as the Penta). Since cricket is a big money-spinner, all five would be interested in telecast rights.

Let the BCCI award telecast rights to all five instead of the top bidder. The BCCI can devise a transparent process to negotiate/determine how much they would pay for the rights.

Here are the advantages:

The BCCI can actually earn more. For example, if the rights for four years' telecast would have fetched $500 million, by selling the rights to the Penta for say $110 million each, the BCCI can make another cool $50 million!

Since the Penta will only pay approximately one-fifth of what they would for the exclusive rights, there won't be pressure on them to insert adverts recklessly. In fact, they should be able to pocket tidy profits by simply sticking to the old paradigm of commercial breaks -- in between overs, during the drinks break and dismissal of a batsman -- as the advertisement pie is big enough to be spread out for all five.

Since five channels will be telecasting the match, we the viewers (heretofore considered a mere cog) will finally have the choice to watch the channel we wish to.

This will expose the Penta to competition. To attract eyeballs, the channels will be forced to present better, and most importantly, be sober with ads!

The viewers can watch the channel that he or she finds the most viewer-friendly -- and least irksome -- and thus liberate us finally from the tyranny of the 'exclusive rights holder' and his telecast saturated with ads.

Competition will compel the broadcaster to improve the quality of telecast and commentary, and to curb the current propensity to bombard us with ads anytime, anywhere, anywise.

The broadcaster cannot ride roughshod over viewers as he does now, and he will be forced to treat us with some respect.

In fact, the effort to get better commentators could one day deliver us from the cliched commentary purveyed by the likes of Ravi Shastri!

Do away with the exclusive telecast rights! 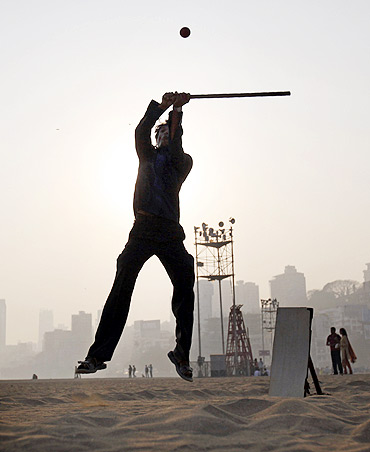 For the advertiser, today he has no choice but to shake his leg with the 'exclusive rights holder'. The option of five will help him to be selective and sup with the more viewer-friendly types.

I'm no economist, but I believe the scramble for advertisers will result in lower rates of advertisement, which will enable even those not having deep pockets to advertise during prime time.

Through legislation, Doordarshan has been riding piggyback on the 'exclusive rights holder'. With exclusivity tossed out, Doordarshan will be forced to buy the rights like others.

I believe it's a win-win scenario for all -- the BCCI, viewers, broadcasters and the advertisers. But will the imperious BCCI be pervious to reason? Will the BCCI pull its socks up? Anybody's guess.

Though I have lost interest in watching cricket on the telly, I haven't lost my passion for the game of cricket.

The tenth edition of the cricket World Cup is upon us. Although at-the-drop-of-a-hat ads will surely suck the fun out of the World Cup, I won't bet on the broadcaster -- who had been counting down to the Cup to make a killing -- to be discreet with ads.