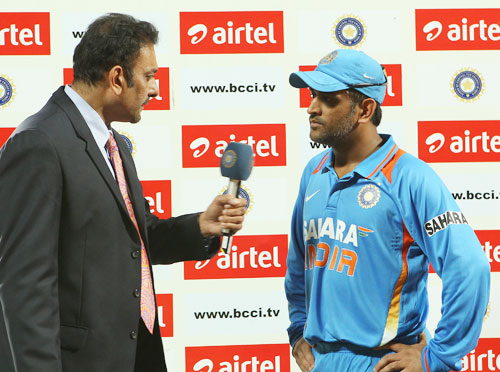 As he led the Indian cricket team for the first time at his home ground and scored the winning runs in the team's comprehensive victory over England, skipper Mahendra Singh Dhoni said the script was just "perfect" for Saturday's One-day game.

Chasing a meagre 156, India trounced England by seven wicket with 21.5 overs to spare and took a 2-1 lead in the five-match series.

Dhoni said everything fell in place as the bowlers did the job by bundling out the opposition for a small total and batsmen complimented the good bowling effort.

He, himself, got a chance to score the winning runs before the home crowd as the city hosted its first ever one-dayer.

"Yuvi got out, so I got an opportunity to bat. At one stage it did not look if I would get to bat. I cannot say it was good that I got to bat, they will beat me in the dressing room. It is one of the best facilities. Execution is very important. Response from the people has been amazing. Everything went off well, we won the game, it was a perfect script," Dhoni said.

'Bowlers will get a lot of confidence out of this' 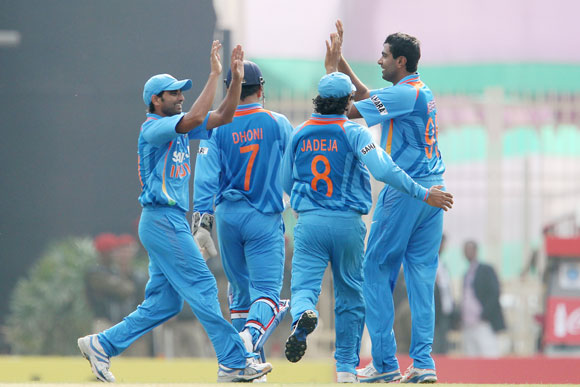 The Indian captain set the bowlers set up the victory with brilliant effort in the England innings and overall it was good team effort.

"Bowlers did the job for us. It was important to take wickets with the new ball. 150-odd was not enough to defend for the English side. Gautam batted well with Virat, that was important as the ball was doing something.

"Most of the bowlers are new. Bhuvi and Shami have just got into the side. I expect contributions from them. They will get a lot of confidence out of this," he said.

'We needed a bit of freakish result, needed early wickets' 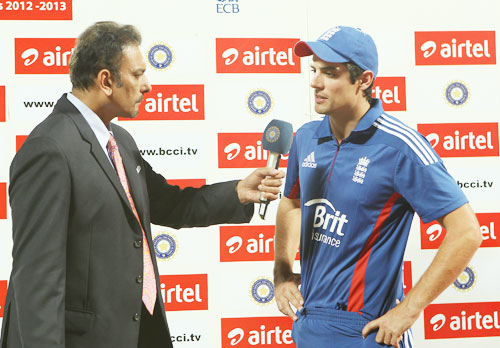 England captain Alastair Cook said it had to be a freak day if they were to beat India.

"150 was nowhere near enough on that wicket. Credit to India. Not really going to defend that, unless it is a freak day. We needed a bit of freakish result, needed early wickets," Cook said.

"We did not get out to attacking shots, got out to defensive shots. It is frustrating, We have the potential, but we are not clicking at the moment. The ball skid on slightly better in the second innings, we knew that would happen."

However, the visiting captain was confident that the team would "regroup" to give a better performance in Mohali on Wednesday.
Tags: Alastair Cook , India , Mohali , England

'I just followed my instincts' 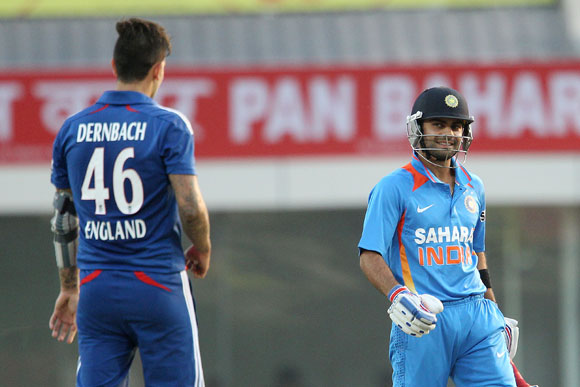 Image: Virat Kohli of India is all smiles after top edging the ball for four from a delivery by Jade Dernbach of England
Photographs: BCCI

Young Indian batsman Virat Kohli, who scored an unbeaten 77 to be adjudged Man-of-the-Match, said he did not repeat the mistake of playing pre-planned shots.

"I was batting well for a while but getting out in different ways, got a few good balls and made a few mistakes. Today I just reacted to the way the ball was thrown at me. I just followed my instincts. I did not have to pre-plan which I was doing in the previous games. I was relying on my reflexes. It was a difficult wicket, Finn gets the ball to seam on any wicket," he said.

Tags: Virat Kohli , Young Indian
More
© Copyright 2022 PTI. All rights reserved. Republication or redistribution of PTI content, including by framing or similar means, is expressly prohibited without the prior written consent.
Write a
Comment
Print this
article
ALSO
READ